Jerusalem – Based on a series of tours through Katamon and Baka, former Palestinian neighbourhoods where Arab identity was swiftly erased after the 1948 Nakba, the project “Jerusalem, We Are Here” is a web-based interactive documentary that takes viewers on a journey in Jerusalem.

The documentary revives the culturally rich landscape of Palestinian West Jerusalem, based around an interactive map embedded with original film footage, photographs, interviews and audio, directed and produced by Dorit Naaman.

“I realised that if we wanted to make it accessible to Palestinians, we needed to do something that is virtual,” Naaman told Al Jazeera. She began sourcing information about Katamon from Palestine and the diaspora by word of mouth more than five years ago. “1948 is almost 70 years ago, and we need to collect the memories and documents from the people who are still around, who remember. There’s a sense of urgency to this.”

Naaman, who is based in Canada, teamed up with Mona Halaby, a Palestinian whose family was expelled from Baka in 1948. Halaby’s extensive knowledge of the neighbourhoods provided the basis for the interactive map. “It was a very vibrant area with a lot of educated Palestinians, urban Palestinians, professionals, lawyers, educators, doctors, people in the media – people who were interested in the history, the politics, the culture, the literary world,” Halaby told Al Jazeera.

“I’ve always been interested in social history, and culture, lineage and genealogy, and I grew up fortunate to have a mother who enjoyed sharing that sort of story and history with me.”

Throughout the tours of Katamon and Baka, viewers meet individuals returning to their family homes for the first time since 1948, hear stories of notable residents such as educator Khalil Sakakini, and see the neighbourhood’s originally Arab homes, now occupied by Jewish Israelis.

The documentary will keep expanding as more homes are mapped, and Naaman hopes they can “extend it to the rest of Jerusalem … It’s a place that we can start collecting all that information for generations to come,” Halaby said. “It’s going to be a living, breathing document.”

Below, four contributors to Jerusalem, We Are Here share their experiences.

Teddy Theodorie and his sister Nadia grew up between homes in Talbiyeh and Katamon before their family was expelled from West Jerusalem in 1948. Now, both in their 80s, the siblings live in Bethlehem and contributed stories from their youth to Jerusalem, We Are Here.

Teddy: I was born in Jerusalem, and I grew up in Jerusalem. I was a teenager in 1948, and we lived through many things, but as kids, we never felt it. We were engaged in schools and activities, and we had the YMCA. All my knowledge of Palestine, from north to south, goes back to the YMCA.

People used to mingle a lot in Katamon and Talbiyeh – wherever you went, you would see people you knew. There were no divisions, and the people were very sociable. But people started to leave after the Semiramis hotel was blown up in Katamon by the Israelis in January 1948.

Nadia: It was a full, fun childhood in Talbiyeh and Katamon, but in 1948 it became very tense. When we left, we were told it was just for two weeks, and our family chose to come to Bethlehem because it is very near to Jerusalem and everyone was trying to move to the Old City.

Still, we are not allowed to go back to our home. But it’s necessary to preserve the heritage. People should know that there were Palestinians there.

Michel Moushabeck is a Palestinian writer, publisher and musician who lives in the United States. He was born in Beirut shortly after his mother and father’s families were expelled from Katamon in 1948, and he was never able to visit his family’s home in West Jerusalem.

In Jerusalem, We Are Here, Moushabeck visits Jerusalem virtually, on a Skype tour through the old city, where his grandfather was the Mukhtar of the Eastern Orthodox Church.

As I virtually walked through the streets of the old city and revisited the places I frequented as a child nearly 50 years ago, I really experienced an emotional journey like no other. And it was a special treat for me to be escorted to our family’s home. I did not live in Katamon at all. I only ever saw our house in Katamon in old photographs from my parents.

The way my father used to talk about Katamon, I got the sense that it was a very special community, and a community of intellectuals. I knew that the neighbourhood was a special place in Palestinian history because it had all of these really highly educated people in one spot.

I could imagine the literary salons that would take place, the political discussions, the storytellers and historians and poets gathering together. Projects like Dorit’s are trying to recreate this history.

The most important part is really showing the people who live there now that those houses they are occupying had been lived in by Palestinians, had been built by Palestinians, and had an amazing history before them.

Anwar Ben Badis is a linguist, translator and Arabic teacher who lives in Jerusalem. His mother’s family was expelled from Baka in 1948, and today Ben Badis is one of the few Palestinians who has returned to live in the neighbourhood.

Inspired by his mother’s stories and extensive research into the area’s Palestinian history, Ben Badis leads tours through Baka and Katamon, and acted as a guide for Jerusalem, We Are Here.

“In 1994, I came back to Jerusalem as a student and now I live in Baka – not in my mother’s house, but it was important for me to be very close to her house, to keep her stories and memories alive.”

“Before 1948, we didn’t have borders between neighbourhoods, and it was a place where people felt they were a part of Jerusalem, and Jerusalem was part of them. Many of the Jerusalemite families from here now live in East Jerusalem, and for years they didn’t want to share anything – it’s not easy for them.”

“So for me, this project takes me back to renew my memory. It’s very difficult, but I don’t feel like a stranger in Baka. I am probably the only Palestinian who will put my flag on my balcony. I feel it is important – this is my country, this is my neighbourhood, this is my land.”

Jerusalem, We Are Here will next be presented at the Jerusalem Fund/Palestine Centre in Washington DC on April 13.

It will be streamed live at: http://www.thejerusalemfund.org/events/upcoming/jerusalem-interactive-documentary

The full documentary is available at www.jerusalemwearehere.com, with plans to present it in Jerusalem this summer. 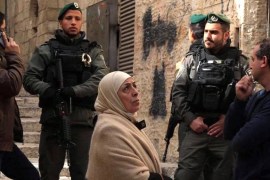 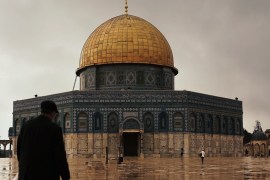 Although new version is more inclusive than controversial older map, it erases the Palestinian neighbourhood of Silwan.