Nuevo Amanecer Hawai, Peru – When Victor Pio’s father was shot dead in the cloud forests of Peru‘s central Amazon in 2013, he inherited a community already hardened by violence and misfortune.

The loggers who had his father executed for denouncing their illegal trade were making new gains on his community’s ancestral land and to make matters worse, a mysterious plant disease had begun to strangle the economic lifeblood of his village: coffee.

“There’s been a lot of suffering in this community,” said Pio, chief of Nuevo Amanecer Hawai, an isolated hamlet of around 80 indigenous Ashaninka families surrounded by the primary rainforest.

The 38-year-old’s struggle is one shared by dozens of coffee-producing indigenous communities in Peru’s fertile Central Jungle.

After decades of territorial conflict between indigenous groups and loggers and political violence, the communities are now salvaging what is left after a deadly leaf blight crippled yields, and fighting to find fair markets in an industry with a legacy of discrimination against indigenous farmers.

‘We were left with nothing’

Coffee is king in Peru. It’s the leading agricultural export and ranks as the seventh most valuable general export commodity after precious metals, natural gas and oil.

The USDA, which analyses international coffee markets, labels the country the largest exporter of organic coffee in the world.

For many indigenous communities like Nuevo Amanecer Hawai, the high cost of chemical fertilizers has always forced them to cultivate organic coffee.

But without an official seal from international organic certification organisations like Fair Trade or Organic – which costs thousands of dollars and requires years of farm inspections -small-scale farmers like Pio are denied access to lucrative international markets for their coffee.

When the plant disease known as la roya, or leaf rust, arrived in Peru from Central America in 2008, it was organic farmers like Pio who were hit the hardest.

Lacking pesticides to fight the fungal infection attacking the leaves of the plants, the majority of his community’s collective plantation was destroyed, leaving them in financial ruin.

Unable to produce coffee for nearly three years, the village elementary school was closed and villagers resorted to planting subsistence crops like yucca and plantain to feed themselves.

“We were left with nothing. We had to survive with what we had, with our ancestral foods,” Pio said.

Now, as the community’s new fungus-resistant plants steadily begin to bear their coveted red and gold cherries, they are left with another problem that has plagued them for decades: getting a fair price for their yield.

In an industry where quantity is power, indigenous communities like Pio’s struggle to match production with many “mestizo” or non-indigenous producers, who are often members of powerful cooperatives that export to US and European markets.

Without access to equitable markets, they’re forced to sell their coffee to predatory intermediaries who come into communities and buy at prices far below market value only to turn it around to larger export companies for a profit.

Pio said the intermediaries bring their own scales and manipulate the weight per sack.

“Coffee is a product that gives us life. But we’re not finding anyone to pay us what our product is really worth,” he told Al Jazeera.

Indigenous farmers in the region said they are seeking buyers willing to pay $2.50 per kilogram, a price that allows them to recoup production expenses. But due to many factors, including low yields and transportation costs, they are often forced to sell to intermediaries for around $1.60 per kilogram or less.

Without fetching a market price or direct trade relationship with an international roaster, Pio said his community would remain in the same cycle of hardship, forced to sell to intermediaries or haul their coffee to the city – a six-hour journey through rutted jungle roads to the regional capital of Satipo – in search of buyers.

“The objective is to export our coffee, to improve our economic situation and the health and education of our community,” Pio said.

Intermediary buyers declined to be interviewed, but in Satipo, where coffee fuels the regional economy, Jose Estrada, president of the Valle Santa Cruz Cooperative, spoke bluntly about indigenous farmers.

“They don’t trust us and they lack sensibility, preparation and guidance,” he said.

Estrada noted the quality of their coffee is excellent and that his cooperative would be willing to work with any indigenous community that could produce in volume.

Of the 230 members in Valle Santa Cruz Cooperative, only one is indigenous.

Victor Pio and other indigenous community members said the farmer-owned cooperatives brand themselves as socially responsible organisations but in practice shut out indigenous participation.

In the lush Ashaninka village of Alto Incariado in the neighbouring province of Chanchamayo, Misael Amaringa motioned to a neat plot of mature coffee plants, each stricken with yellowing leaves and void of fruit.

“It was a shock,” said the 41-year-old coffee grower of the infection that wiped out his crops.

“We took out a loan from Agrobanco, but now we don’t have the resources to pay it back because of the low price we’re getting for our coffee,” he said.

Amaringa’s resistant plants, now in their third year of flowering, have recently begun to produce.

Hungry to recoup losses, his community’s hope is to find an alternative to the intermediaries.

“It’s this vicious cycle that we’re trying to break by working for justice, quality, love and transparency,” said Melesio Mayunga, president of the newly formed Association of Ashaninka Producers of Alto Incariado.

By forming a licensed business association they hope to attract state and NGO financing and secure lucrative direct export agreements with international buyers. They’re rallying neighbouring communities to join them and emphasising a native brand.

“Our vision for our association is to work differently, to recover what’s ours and market an authentic Ashaninka product with a sustainable identity,” Mayunga, 45, told Al Jazeera.

While an Ashaninka brand is of essence to his association, Mayunga said he welcomes mestizo participation, as small-scale farmers – indigenous and mestizos alike – are victims of what he described as the “mafia-like” tactics of intermediaries and exclusionary practices of cooperatives.

“Our mestizo brothers working just as hard as us are in the same situation,” said Mayunga, who is actively recruiting non-indigenous neighbours to join their association as well.

Along with the community’s mestizo neighbour William Vigo Arcos, Mayunga has travelled to surrounding villages to recruit new members.

“The Ashaninka in Alto Incariado are like my brothers. We grew up together,” Acros told Al Jazeera.

With a background in business administration, Arcos, 33, said he often accompanies his Ashaninka neighbours to assist in business-related trips to their municipality and to help them cut through systematic discrimination.

“They make them wait, sometimes for hours. But when I’m with them they attend us,” he said.

Vigo is studying coffee commercialisation and intends to use his training to help his neighbours build their own brand of specialty coffee. Both men said the association’s task now is to recruit as many neighbouring communities as possible, as higher production will give them more negotiating power.

“We can do it because of this land that we’re blessed with, our high altitude, climate, and soil – it all favours us,” Vigo said.

Among indigenous and mestizo coffee producers alike in the region there’s a sense that the Peruvian government has fallen short on promises to promote Amazonian agriculture, subsidise costly farming equipment, and provide equitable loans.

Americo Cabecilla, who heads the Center for Native Communities of the Central Jungle (CECONSEC), is working to petition the government for more agricultural resources in the region. He sees strong and numerous community associations as a step towards building profitable indigenous-owned businesses working for a greater good.

The sun sets over Nuevo Amanecer Hawai as members of the community load their communal truck with over 1000 kilos of sacked coffee. Despite the hardship there’s a sense of hope and pride that comes alive in these moments of shared labour.

They’ve recently taken steps to form their own association. But for now, they’re left to sell where they can.

When asked about the community’s name, Chief Victor Pio said that when they returned to their village in the late 90s after nearly a decade of political violence had displaced them, their coffee had been overgrown by jungle. A variety of pineapple called Hawaii was all that survived in the abandoned fields. Pio’s late father chose the community’s new name of Nuevo Amanecer, or New Dawn Hawai.

“In spite of all the injustice, all these things, the community keeps on living. We’re still here,” said Pio. 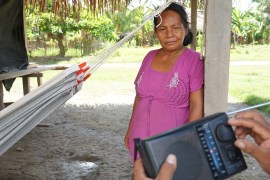 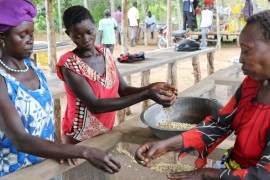