Washington, United States – When a New York billionaire property mogul announced that he was running for president on June 16, 2015, few believed he would be anything more than an entertaining anecdote. Lampooned by the Democratic Party, often mocked by members of the public, baulked at by political watchers and gobbled up by the media, Donald Trump was unfazed.

The reality TV star faced an uphill battle to be taken seriously by his rivals. He ran a strong campaign by holding six to eight rallies a week across the United States with a big loud clear message, which resonated with the people of America:

“Sadly the American Dream is dead. But if I get elected president I will bring it back, bigger and better and stronger than ever before and we will make America great again,” he said in his speech.

Just over a year and a half later after a brutal campaign, one of the least popular president-elects in recent history will stand on Capitol Hill  to become 45th president of the United States, one of the most powerful positions in the world, to the utter disbelief of many.

On the eve of his inauguration, Al Jazeera took to the streets of Washington to ask people if Donald Trump‘s promise will work for them. Will he make their America great again?

Melissa Rickwald, 26, is a high school theology teacher who works in Virginia

“I voted third party because I think it would have been undemocratic of me to vote for the lesser of two evils. I voted as a Catholic christian and I’m pro-life, so I’m very concerned how Trump’s administration will handle that.

I hope he does a good job as our leader.

Obviously I wouldn’t have voted for him, but at the same time I’m not sure if the way he was portrayed by the media was necessarily accurate either. I am somewhat nervous, but I think we should all just see what happens.

Tim Ebron, 27,  is a settlement processor who works in real estate in the Washington area.

“I voted for Hillary because I despise Trump.

I cried when he won.  I was very, very upset. I think we’re regressing as a society if we think Trump is going to save us.

As a gay, mixed-race American, who knows what lies ahead … The thing is there’s nothing I can do unfortunately.

READ MORE: The foul stench of fascism in the US

I’m just going to have to wait. Four years is a long time, but maybe it won’t be four years. It could be four days.

Nobody knows what he’s going to do. That’s the scary part – I don’t think he even knows.”

Elijah is 27 and works in a school just outside Washington.

“I voted for Jill Stein because I always vote green.

I’m not going to vote for the lesser of two evils because of fear – that’s not what America is about.

I don’t agree with everything Jill Stein says, but, hey, we need to change the way we think about politics.

WATCH: Should the world be worried by a President Trump? (25:00)

The democrats and the republicans have the same values and they realise.

What annoyed me about this election was the intolerance of New Age liberalism. Marching up on the inauguration and going on witch-hunts doesn’t work.

People need to work together. Change happens from the bottom up, not the top down.”

Bridget King is a 22 year old teacher who lives in Washington.

“I think he’s just one person and even though one person can make a difference, they can’t make a big difference in my life, so he won’t change my America either way.

What’s good about Donald Trump is that people are talking about politics again.

I would love if America really became rejuvenated and there is energy in politics.

I don’t want to say who I voted for,  I think it’s a personal thing.

You never owe an explanation to people who you vote for.”

William Boze is a 37 year old beer salesman from Carolina.

“I voted for Donald Trump and I’m glad now. I know I made the right decision.

Hillary Clinton was an absolute no for me.

People can relate to Bernie Sanders and Donald Trump, and not Hillary Clinton because they are both anti-establishment.

I think the Arab Spring was the worst thing that could have happened. If Obama and the West would have let them alone and left Bashar and Saddam Hussein be, ISIS [the Islamic State of Iraq and the Levant group also known as ISIL] would never have happened.

Obama should never have pulled the troops out of Iraq. He left a big vacuous hole ready to be filled by ISIS.

I’m bipartisan and I don’t agree with everything Trumps says and does.

Byron Simmons, 36, is a  client solutions manager from Maryland.

“What do I think?

I think we should give Donald Trump a chance. He’s a proven winner.

I voted for him because he’s a winner.

I like the fact that he loves to speak at rallies. I love that he’s a billionaire.

Why would I want someone who has nothing to represent America? That makes no sense.

READ MORE: What powers will Donald Trump have as president?

It’s about the bottom line. He beat Hillary because he spoke to the people.  We wanted change and we got it.

She came across as sneaky and he’s honest, albeit a little too honest sometimes, so he appears crass, but who cares.

We had diplomacy for eight years. We need a strong leader.”

Johnny is an Irishman living in Virginia who wanted to remain anonymous.

“I’m afraid. I’m a legal alien, but I’m still afraid of being sent home. I don’t want to voice my opinions publicly.

Look at the graceful speeches Obama has delivered, now we have Trump for the next four years with his oafish rhetoric.

He’s like someone you’d meet in a bar. He’s not presidential.

Washington is divided. If Donald Trump decided to deport immigrants from Mexico and Central America, I’ll lose all my kitchen staff and I’m not the only one. Kitchen staff across the US are made up of immigrants. If Trump sends them all back, there’ll be no restaurants any more.

Irish people have always been so popular and welcome in the US, I’m afraid that could all change.”

Charlie Yi, 45, is a former Marine, who took part in operation Desert Storm in the first Gulf War in 1991.

“I was a Bernie Sanders supporter. Would he have beat Trump? Who knows.

I voted for Jill Stein simply because she cared about what was happening in Standing Rock, where a pipeline was being built through Native American lands and neither Trump, nor Hillary seemed to give a damn.

It was a huge story in the US. Its naive to think that one president can change everything.

READ MORE: Barack Obama – So long, and thanks for all the speeches

If you want change, you have to change yourself. I think Trump voters are naive to think that one man can save them.

No one person has as much power as people would like to think.” 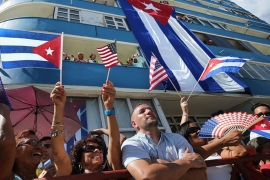