Padua, Italy – It is a particularly warm Monday morning in Padua, a small picturesque city in northern Italy close to Venice. Caffe Pedrocchi is still waiting for customers.

Giuseppe Salvatore Riina stands at the entrance of the cafe wearing a white T-shirt and beige trousers. The 39-year-old looks no different from many other young Sicilians – a rather small man with dark hair and olive skin, a pair of black sunglasses that hide his gaze, and a proud pose.

He has lived in Padua since 2012, working as a secretary at Noi Famiglie Padovane, a social service organisation that helps drug users, immigrants, and people who have recently been released from prison.

But in Sicily, where he was born, he is better known as Riina Jr, or Salvuccio, son of the notorious Sicilian mafia boss Salvatore “Toto” Riina. Riina Jr’s 86-year-old father was head of Cosa Nostra from 1982 to 1993, the year of his final arrest and conviction. Many still think of him as the head of Cosa Nostra, although he is imprisoned and serving multiple life sentences for his crimes.

Life on the run

Together with his mother, Antonietta Bagarella, his older brother, Giovanni, and sisters Maria Concetta and Lucia, Riina Jr had been in hiding until his father’s arrest. He was 15 at the time.

The whole family had been moving from one Sicilian town to another under a fake family name, living in what he describes as a “game” in which each of them had to play a precise role in order to avoid detection.

In 1993, the family was living a “regular” life in Palermo, Riina Jr recalls.

“I had a group of friends who were ignorant of our real name. I spent a lot of time with my brother, Giovanni, on our scooters or at the cafe. I was with him when a friend announced to the group that Toto Riina had finally been arrested. He was so excited, but had no idea he was telling [Riina’s] own sons,” he says.

Because the family lived on the run, the Riina siblings were home-schooled by their mother, a former schoolteacher. The children had never been to the hometown of their parents – Corleone. But once uncovered, Antonietta Bagarella returned to Corleone to seek the support of her family, also known for its connections with Cosa Nostra.

Riina Jr spent the nine years after his father’s arrest at his grandmother’s house in Corleone, surrounded by a web of mafia connections.

His mother’s brother, Leoluca Bagarella, was arrested in 1995 and sentenced to life in prison. Bagarella was involved in the Corleonesi branch of the mafia organisation and was complicit in crimes and murders committed over the course of his 40 years in the mafia. He was often compared to the boss, Riina, for the cruelty of his crimes and is believed to have murdered more than 100 people, including a child.

In 1996, Riina Jr’s brother, Giovanni, was arrested and later convicted to a life sentence for committing several murders and following in his father’s footsteps in Cosa Nostra.

He was sentenced to eight years and 10 months in prison for his association with the Cosa Nostra and taking over Toto Riina’s role within the organisation. Phone conversations wiretapped by anti-mafia police provided evidence of Riina Jr’s role as the head of an illicit structure, which linked mafiosi from Corleone and corrupt entrepreneurs from Palermo, all connected to Cosa Nostra.

He was released in 2011, however, but kept under special surveillance until 2014. He is now serving the last of his two years of probation in Padua.

READ MORE: The most powerful mafia you’ve never heard of

In recent months, Riina Jr attracted media attention in Italy after the publication in April of an autobiography in which he tells of his life on the run with his family, until his father’s arrest.

“I felt the need to tell the story of my family from my point of view. It is not my job to judge my father’s actions. I wrote this book because I want people to know what a great father he was for us,” Riina Jr tells Al Jazeera at the cafe.

In the book, Riina Jr portrays Toto Riina in a positive light – a loving father and husband, who is always there for his family and never disappoints.

This is a portrait that clashes uncomfortably with “The Beast” Italy has painfully known and feared for years, responsible for the murder of people the memory of whom is still fresh in Sicily.

During his 50 years of criminal activity within the mafia, first as a member of the faction of mafiosi from the town of Corleone in Sicily, and then as “boss of the bosses” of the Cosa Nostra Sicilian Mafia pyramid, Toto Riina committed and ordered numerous attacks, leading to the murder of at least 60 people both among rival mafia families and representatives of legal institutions.

The murders reached their peak during the 1980s and 1990s, when several among both rival mafia families and representatives of legal institutions were murdered in an aggressive attempt to stop all anti-mafia activities.

Before his arrest, Toto Riina ordered the deadly attacks against two well-known Sicilian anti-mafia judges – Giovanni Falcone and Paolo Borsellino – in May and July of 1992 respectively.

They were killed in car bomb attacks, together with Falcone’s wife and eight bodyguards. These incidents are still remembered as two of the most brutal attacks conducted by Cosa Nostra.

“Palermo was in total chaos in those years. It was like living in the middle of a warzone. Police sirens were constantly on, and the news was reporting on assassinations every two days,” recalls Riina Jr.

“He never came back home with blood on his clothes. I wasn’t there when those crimes were committed. He always claimed his innocence, and I have no reason not to believe him,” he says.

Standing up to the mafia

The Italian public, however, was not as forgiving. Riina Jr’s interview on national TV in promotion of his book was decried as “an atrocious choice”, an offensive popularisation of the mafia, and an insult particularly to the families of Riina’s victims.

Numerous bookshops in Italy have refused to sell the book.

“I am disappointed and angry with the institutions. Boycotting my book is just one example of how people in Italy, beginning with the police, have decided to label me as the bad guy with no possibility of redemption,” he says.

One of Riina Jr’s critics, Giovanni Impastato, condemns his words and actions, saying he is spreading “an ambiguous message about the mafia [by] describing his father as a victim of institutions …”

WATCH: A Very Sicilian Justice – Taking on the mafia

Impastato, 63, was born into a family of mafiosi like Riina Jr. “Everyone should be clear that Cosa Nostra is made of criminals to be punished,” Impastato says.

Unlike the Riinas, he took the decision to publicly denounce his family and take over the anti-mafia campaign initiated by his brother Peppino, who was brutally assassinated by Cosa Nostra in 1978 in Cinisi, their hometown in Sicily.

Giovanni’s and Peppino’s father, Luigi Impastato, was a mafioso affiliated with the mafia in Cinisi, headed by boss Gaetano Badalamenti. The Impastatos also had strong family links with the Sicilian-American Mafia.

But after Peppino was killed for his anti-mafia efforts, Giovanni and his mother Felicia, who died in 2002, decided to send a clear message to the mafia community by denouncing it and transforming their house in Cinisi into an anti-mafia association, today named Casa Memoria Peppino e Felicia Impastato.

“On the day of Peppino’s funeral, she invited our mafiosi relatives to leave our home and never come back. The door of this house has remained open ever since, and today we are here to spread awareness and help anyone in a similar situation to ours, says Impastato in his office in Casa Memoria in Cinisi.

He speaks of Riina Jr, and of other sons and daughters of Cosa Nostra, as people who were born on the wrong side but who have a choice – no matter how painful and difficult that choice may be.

He and his mother are a rare case in Italy. They had to fight on three fronts simultaneously: against their own family, unscrupulous criminals, and corrupt institutions.

“Sicily was very different in the 1970s. First of all, Cosa Nostra was different from today, following precise codes of conduct which have been totally challenged by the mafiosi from Corleone, like Riina,” Impastato explains.

“Secondly, the major institutions such as politics and the church were colluding with the mafia. Peppino was killed in 1978 by the men of boss Badalamenti, but the Italian government only condemned the boss for his murder in 2002. My mother and I finally found peace, but it took 24 years,” he says.

READ MORE: Taking from the Italian Mafia to give to the poor

Riina Jr, however, feels he and his family have been “unfairly” victimised by society.

“I am paying for my father’s mistakes just because my name is Riina. How many from my generation will have to be punished?” he asks.

According to him, this is also the reason why he requested to be moved away from Corleone in Sicily when he was released from prison in 2012 to serve his probation.

“Everybody knows my name and my family in Sicily. Corleone, where my mother and youngest sister still reside, is a small town,” Riina Jr says.

He insists he “was living what we call a ‘white’ life sentence, meaning that anyone could go to the police and accuse me of anything because the police would always assume I am a criminal and I act as such.

“It was a nightmare. I wanted to go away from years of wiretapping, observations, false accusations and ignorance,” he says.

Despite evidence of his involvement in illicit activities with other mafiosi, Riina Jr maintains both his own and his father’s innocence after all these years, arguing that such evidence was based solely on verbal accusations made by “supergrasses” – criminals who chose to become informers for the police and judges after their arrest, in exchange for legal benefits, such as a reduced penalty.

He goes on to argue that the popular image of the mafia does not correspond to the truth. “I don’t want to say too much about this as I know I would be misunderstood. What I can say is this: Had the mafia not been there, who would have helped Sicilians find jobs?

“I do not remember the exact moment I realised who my father was, who we all were. It was a gradual and slow process. I was never angry with him – why should I be? All that matters to me is that we are family; he is family,” says Riina Jr before leaving Caffe Pedrocchi, refusing to comment about his father’s victims, saying that it is “because what I say would be used against me”.

Giovanni Impastato remains baffled by Riina Jr’s words. “I am not against Riina Jr’s book. Anyone should be free to write and publish. However, I feel angry and hurt by his failure to stand against the mafia, against his father,” he says.

“I never stopped loving my own father, but I had to publicly say he was a criminal. It was my duty towards my brother and society. Why doesn’t he do the same? Casa Memoria will be open to support him in that case.” 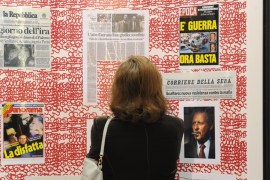 Mafia and media: The reporters working a deadly beat 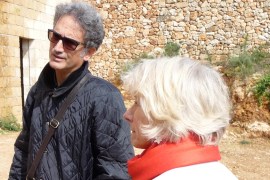 The British actress explains why she decided to narrate the documentary A Very Sicilian Justice.