Havana, Cuba – In a historic moment FARC rebels have agreed to a peace deal with the Colombian government, bringing to an end decades of conflict and setting in motion a process of reconciliation.

During the negotiations in Havana, Cuba, Al Jazeera spoke to Judith Simanca Herrera, a FARC commander also known as Victoria Sandino, who recalled how she joined the rebel movement as a 25-year-old.

It was 1990 and Sandino had just graduated with a degree in journalism from a university in Bogota, more than 800km from her small hometown of Tierralta, located in the department of Cordoba, a region that was mostly under the control of armed groups. Her parents had been displaced five times, forced to flee fighting between the groups.

It was a time of political turmoil in Colombia, during which efforts to rein in multiple armed groups – criminal organisations, left-wing rebels, and right-wing paramilitaries – and achieve a national reconciliation were marred by political corruption, assassinations and social injustice.

The war between the Colombian military and the armed groups had been raging since the early 1960s – the various parties fighting each other for influence.

“I needed a turning point in my life,” the now 51-year-old recalled, thinking back to the factors that shaped her decision to join the Revolutionary Armed Forces of Colombia (FARC). She wanted to make a difference in her country, to change what she viewed as an unjust system.

Established in 1964, the FARC is an armed group with a Marxist ideology that has vowed to defend the interests of Colombia’s peasants in the face of great social inequality.

FARC rebels have spent more than five decades organising military raids, kidnappings and bombings throughout Colombia to achieve their goal, financing these actions in part by being one of the world’s largest cocaine exporters. They have justified (PDF) these acts by arguing that there is no other way to fight for land reform and the rights of the poor.

“I met a friend and told him that I had decided to immerse myself in the jungle … I needed to actually do something for this country,” Sandino said.

A week later – with the blessing of her parents and the guidance of an acquaintance – she boarded a bus for the more-than-400km journey to join the rebels in the jungles of the southern department of Caqueta, where the FARC were operating at the time.

More than 20 years later, in April 2013, Sandino – as the commander of FARC’s Block 21 – would lay down her arms and travel to Cuba to sit at the negotiating table with the Colombian government.

Paving the path towards peace

Today, Sandino no longer wears the green army attire she donned for more than two decades.

For the past four years, commissions from both sides have been paving the way for a peace deal to end the five-decade-long bloodshed between the Colombian government and the guerrilla group, a meaningful move in a country where at least 220,000 people have been killed, 80 percent of whom were civilians. Some six million have been displaced and 40,000 have gone missing.

The peace talks reached a breakthrough on June 23, 2016, when Colombia’s President Juan Manuel Santos and the head of the FARC, Timoleon Jimenez, signed a historic ceasefire agreement. With the peace deal, the group has agreed that its estimated 7,000 foot soldiers and commanders will hand over their weapons, which will then be melted down to make three peace monuments.

The agreement will be finalised in a decisive referendum on October 2.

“Colombians: the decision is in your hands. Never before have our citizens had within their reach the key to their future,” declared President Santos, who was re-elected in 2014 on the promise of a peace deal.

“Today I can say – from the bottom of my heart – that I have fulfilled the mandate that you gave me,” Santos said, addressing the people of Colombia.

For Sandino, however, while the peace process has “come a long way”, there are still some loose ends.

“You might think that it’s an irreversible process, but the reality is different,” she said before the peace agreement was reached. Sitting in a hotel lobby adjacent to the convention centre in Havana where the peace negotiations were taking place, she explained: “Implementing the agreements that have been reached in Cuba won’t be an easy task.”

According to Sandino, it will be possible only if the Colombian government makes “the institutional changes that are needed in the country”. But, she added, “that is not going to be easy because they said that there won’t be any [structural] changes.”

Sandino recalled her first few days with the group.

“It felt like a party to me,” she said, smiling.

“I enlisted in FARC with the conviction that with them I could help produce the changes that were needed in Colombia.”

When she immersed herself in the jungle, she left behind a “despondent society” and became part of a “family guided by strength, brotherhood and solidarity”, she said.

Although she considered herself to be a strong person, she was unprepared for the gruelling physical demands of the group. “I thought I wasn’t going to be able to withstand it,” she confessed, explaining how FARC members, both male and female, undertook long treks carrying heavy loads through mountainous terrain.

According to Sandino, some of their backpacks weighed as much as 75lb (34kg).

“I couldn’t carry that much weight,” she said. “While walking, I would slip or fall. People would make fun of me, and the guys would push me around.”

The contents of the packs varied. “Books, I always carried books. A camera and video cassettes. Women’s stuff; make-up, creams and lotions. And groceries, like rice, panela, milk, pasta and whatever they would give me.”

According to government estimates, in 2005 women and girls were thought to make up about 30 percent of the FARC’s ranks. In the field, they are expected to carry out the same duties as their male counterparts.

“During clashes with the army, there were times we couldn’t bathe for five, six, seven, 10 days,” she explained. “That can be troublesome for menstruating women because it might lead to skin irritations.”

Getting to the top

The FARC has a well-defined structure and chain of command that is broken up into geographic fronts, with each soldier assigned political and military duties. Sandino’s journalism skills helped her gain ground and position herself within the organisation.

“From the beginning, my job was to produce FARC’s propaganda, as we would call it within the organisation,” she said. “I filmed, edited videos and taught writing classes.”

Sandino explained how she and her team produced images that showcased FARC’s military strength.

She became a commander during the failed 1999-2002 peace talks, when she was part of the security detail for the now-deceased commanders Alfonso Cano and Raul Reyes.

The expression on Sandino’s face changed when asked if the FARC had ever made mistakes.

“We’ve made mistakes, very painful ones,” she admitted. “What happened in Bojaya is an example.”

On May 2, 2002, FARC rebels seized the town of Bojaya by launching gas cylinder bombs. Approximately 119 civilians were killed, and 98 were wounded by the explosions.

“But we’ve had the integrity to own up to them,” she added. “Communities like this one need to be redressed by the Colombian government … because these mistakes are consequences of the war.”

Sandino’s loyalty to the organisation is absolute. “I’ve lived life to the fullest, and I don’t regret anything that I’ve done,” she said. “I feel strong, filled with much love, affection and wisdom.”

But she is homesick and welcomes the relief that comes with the possibility of peace. “I am dying to go back to Colombia. I haven’t been to my hometown in 29 years. I want to spend time with my parents,” she said.

“If the changes that the country needs actually take place, we will be able to work closely with our communities. That’s the peace that we’re seeking.” 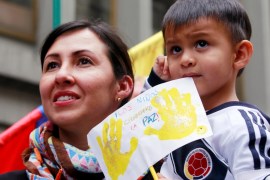 Rebels to let children younger than 15 leave armed group as part of peace deal it is close to signing with government. 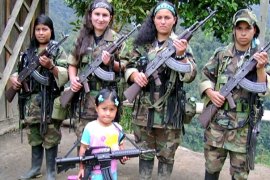 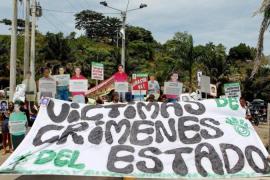