New York, US – It is testament to his status in United States politics that Sheldon Adelson has a primary election named after him.

The “Adelson primary”, as it is known informally, is not a vote in which Californians or New Yorkers tick boxes in booths. It refers to the Republican wannabes who pilgrimage to Adelson’s casino empire headquarters to curry favour with the behind-the-scenes mega-donor.

He refrained from backing Ted Cruz and other fund-seekers when the Republican Jewish Coalition met at his Las Vegas Strip hotel, The Venetian, in April.

Eventually, he endorsed the presumptive Republican nominee, Donald Trump. Reports indicate he will fund Trump’s campaign to the tune of $100m, mostly via super PACS (or political action committees), which pay for, among other things, attack ads against foes in the White House race.

He lavished similar sums in the 2012 election, initially on the relatively unpopular but unwaveringly pro-Israel Newt Gingrich but later throwing his weight behind Mitt Romney’s bid to boot President Barack Obama from the Oval Office.

Adelson doubtless rose from humble origins to earn riches from glitzy resorts in Nevada, Macau and Singapore. But whether a self-made man’s wealth should promote such narrow policy concerns as Israel’s security and outlawing online gambling is hotly contested.

As it stands, there are few limits on cashflows into US politics. Adelson’s fans are OK with this, lauding a savvy entrepreneur with strong opinions that he backs with money. He also pays for young Jewish adults to visit Israel and charity projects.

Critics say he corrodes US politics by steering Republicans into ever-more hawkish pro-Israel stances. They allege skulduggery and harrying in his casino empire and say his newspapers relay propaganda, not journalism.

“My friends, this is not democracy. This is oligarchy,” Sanders said in a Las Vegas stump speech in February.

Others highlight Adelson’s trenchant views. The gambling mogul says that “Palestinians are an invented people” and rejects the two-state solution vaunted by most Western policymakers. His solution: more Jewish babies and bigger walls.

He doggedly fought Obama’s deal to halt Iran’s nuclear programme. He unveiled his strategy in 2013, saying the US should drop a nuclear bomb on an uninhabited Iranian desert and compel the country’s rulers to turn off their centrifuges.

In some ways, Adelson agrees with his critics. While hawkish on Israeli security and fiercely against legalising cannabis, he is liberal on such issues as free healthcare, immigration and access to abortions.

In 2012, he told Forbes he was “against very wealthy people attempting to or influencing elections”, but noted how George Soros and other tycoons “funnel their money” to left-wing causes via stealthier channels than his headline-making donations.

Adelson won big with casinos but has not yet hit the political jackpot. Neither Gingrich nor Romney took the White House in 2012. Opening his wallet to United Against Nuclear Iran, a pressure group, did not derail Obama’s 2015 seven-nation deal with Tehran.

“All that money didn’t make a dent in terms of influencing voters on the issues Adelson cares about,” Josh Ruebner, author of Shattered Hopes, a book about the Israel-Palestine conflict, told Al Jazeera.

Bankrolling Trump may prove as chancy as Adelson’s past bets. In some ways, the two men are natural bedfellows: straight-talking property kings with decisive but jejune solutions to problems that leave wiser men scratching their heads.

But, aside from Trump’s low favourability ratings, he is capricious. Initially, Trump sold himself as a “neutral” broker of Israeli-Palestinian peace talks. He walked that back in March with talk of  “unbreakable” US-Israeli ties and a Palestinian “culture of hatred”.

Morton Klein, president of the Zionist Organization of America, described Adelson, a patron and friend of more than 15 years, as a likeable US patriot who was motivated by a “deep concern for Israel’s safety and security.

“He’s a principled man who will support people he thinks are best even if it doesn’t look good for them,” Klein told Al Jazeera. “He’s hoping that maybe, with his help, they may be able to win after all; but for the last few years, that has not worked out the way he has hoped.”

Not everyone agrees. Abba Solomon, author of The Speech and its Context, a book about Zionism, said that Adelson’s bellicose stance on Israel may hail from a misplaced desire to “hold on to” a distant Jewish heritage.

“That can be dangerous,” Solomon told Al Jazeera.

“As Americans, we should work for the common good and American principles of equality. Adelson and some other Jewish Americans working so monomaniacally to advance Israel’s security interests at the expense of Palestinians undermines an ethical US foreign policy.”

‘He’s not Israeli, and he has never lived here’

Adelson has an all-American rags-to-riches story that resonates with many. His father, a Lithuanian immigrant, drove a taxi in Boston. His mother ran a knitting shop from home. The family-of-six slept in a single room.

He was a grafter. Aged 12, he sold newspapers on street corners. Four years later, he started a candy-vending-machine operation. He launched a hit computer trade show in 1979 and entered the casino business a decade later.

His empire currently boasts The Palazzo, The Venetian and Sands Expo and Convention Center in Las Vegas, the landmark Marina Bay Sands Resort in Singapore and lucrative casino ventures in Macau in southern China.

His wealth has peaked and troughed like a rollercoaster, but stands at around $26.4 bn, according to Forbes. He has been dogged by claims of shady business deals, and recently settled a breach of contract case brought by Steve Jacobs, his firm’s former boss of Macau operations.

While he has accrued many honours, Adelson also has a reputation for bolshiness, getting into acrimonious rows and ending up in court.

He feuded with his one-time corporate lawyer and a former US congresswoman, Shelley Berkley, who later wrote that Adelson could “go ballistic” and “plot vendettas” against perceived foes, using his “money and position to bully” others.

“He’s not Israeli, and he has never lived here,” Neri Zilber, a Tel Aviv-based scholar with the Washington Institute for Near East Policy, a think-tank, told Al Jazeera. “Should somebody, even if he happens to be Jewish, have that much influence in Israel’s domestic politics?” 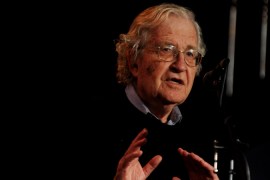 Noam Chomsky: The responsibility of privilege

The famed linguist and political activist says intellectuals have a moral duty to hold centres of power to account.