As Brazilians hold their breath awaiting a crucial Congress vote that will have profound consequences for the future of President Dilma Rousseff and their country, a nagging question remains.

Is the embattled president facing possible impeachment for allegedly tampering with public accounts to hide a huge budget deficit ahead of her narrow re-election in 2014?

Or is she paying the price for presiding over the biggest economic crisis in Brazil since the Great Depression, coupled with the worst corruption scandal in the country’s history?

If Brazil had a parliamentary system, there is little doubt that Rousseff would have been forced out with a no-confidence vote months ago.

But Latin America’s largest country has a presidential system, which means that no matter how low her popularity, currently at 9 percent, according to the latest poll, Rousseff is allowed to keep governing unless her opponents can find a reason to impeach her.

“If she had not destroyed the economy and showed such extreme incompetence, having tampered with public accounts to help get herself re-elected would be inconsequential. All governments do it,” a high-ranking Brazilian diplomat, speaking on condition of anonymity, told Al Jazeera.

‘Only herself to blame’

During the deliberations leading up to Sunday’s crucial vote, one opposition deputy after the other ignored the formal charges against the president to justify their call for impeachment.

Instead, they insisted that Rousseff had to go because she had destroyed Brazil’s buoyant economy and let it sink into deep recession and double-digit inflation.

“The president has only herself to blame for having submerged the nation into its worst [financial] crisis in memory. She has lost the support of the people,” said former ally Bruno Araujo of the PSBD, a key party of the government coalition that abandoned Rousseff last week.

Rousseff herself has not been accused, or charged, with stealing or accepting multimillion-dollar kickbacks, as have many of those who are calling for her ousting, including Eduardo Cunha, the president of the Lower House.

INSIDE STORY: Will Brazil’s Dilma Rousseff be impeached?

Indeed, according to Transparency Brazil, which monitors corruption, 60 percent of members of Congress have faced accusations of stealing, human rights violations and others.

But unlike Rousseff, her Workers’ Party, along with others who have abandoned her coalition, have been indicted in a multibilllion-dollar corruption scandal involving the state oil company Petrobras, which she presided over as head of the board at the time it all started.

Although she says she did not know what was happening, most Brazilians either do not believe her, or say it was her responsibility to know.

Government supporters insist the impeachment process is a farce and call it an institutional coup d’etat.

“In the past, anti-democratic temptations in Latin America were resolved through the barrel of the gun. It seems we were incapable of forecasting that there were other ways of unseating a democratically elected government,” said presidential adviser Marco Aurelio Garcia.

“If a country as important as Brazil can be subjected to such destabilisation of its democracy, it sets a terrible example for the region.” 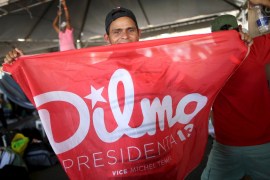 Government and opposition supporters take to streets amid proceedings that could oust president Dilma Rousseff. 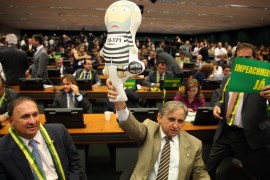 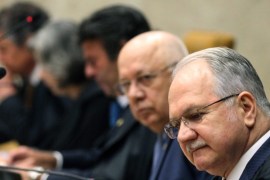 Denial of request for injunction paves way for lower house of Congress to vote on sending president to trial in Senate.