Cotopaxi mountain, Ecuador – It was June 1877 and summer in the Sierra. The dry, Andean wind carried specks of ash that sprinkled down upon the sprawling haciendas and lush swaths of green pastures as hundreds of farm animals grazed at the foot of Cotopaxi, one of the world’s highest active volcanoes.

Since the beginning of the year, the majestic snow capped summit, standing at more than 5,800 metres, had belched out small puffs of smoke and ash.

In the capital, Quito, the churches were silent and the doors remained locked.

It was an unusual time for the city. The interim head of the church had been forced into exile by the military dictator, General Ignacio de Veintemilla, who people suspected of murdering the Archbishop of Quito by lacing his chalice of wine with poison during the Good Friday prayers.

Residents of Quito shunned and feared him. A year before, the general had ridden to power through a violent coup and a three-month civil war with forces loyal to the deposed president, Antonio Borrero.

The streets of Quito were as turbulent as the skies above, which were slowly turning black and pouring a “rain of ash“.

Then, on the morning of June 26, Cotopaxi convulsed. A major eruption shook the ground beneath it. Torrents of water, hot gas and rock poured down, destroying factories and farmland, villages and small towns. An avalanche of mud filled nearby rivers, bursting their banks.

It took just over 30 minutes for the debris to reach the nearest town, Latacunga. Within 18 hours it had travelled west, reaching the Pacific coast.

Although Quito was spared the devastation, it was shrouded in complete darkness and the entire city was coated in a fine layer of ash.

“The inhabitants of Quito were shocked to know that, besides the deaths produced by the clashes with the dictatorship’s army, many people had died because of the mud slides that covered the central area of Los Chillos Valley, where rich families had their haciendas,” Gonzalo Ortiz, an Ecuadorian writer and historian, told Al Jazeera.

“Houses and workshops had been wiped [out] in a moment, animals drowned and were taken down by the flow.”

Two months later, the news of the eruption finally reached the Atlantic. It was estimated that at least 1,000 people had lost their lives and millions of dollars worth of property was gone forever.

That was the last time Cotopaxi erupted on a significant scale.

Then, 138 years later, in the early hours of a Friday morning last August, there were reports of five explosions and a plume of ash five kilometres long shooting into the air.

Vulcanologists now believe an eruption is imminent, but they cannot be sure of the scale.

The areas around the volcano have been designated as risk zones and the 90,000 people living in them are under yellow alert, preparing for the worst.

Patricia Mothes is a volcanologist at Ecuador’s Geophysics Institute in Quito. The Institute has been closely monitoring Cotopaxi.

“Volcanoes have an on and off process,” she explained. “The seismic activity here has been going on for about six months … This is number six of the important eruptive periods from 1532 to now. It always ends in [a] major eruption.”

And while Mothes believes there could very well be an eruption, she is keen to stress that “we will be warned about it”.

Inside the Cotopaxi danger zone

As you wind down the lanes of the pan-American highway, amid the rolling swaths of farmland and undulating hills, Cotopaxi appears almost unobtrusive as it towers over the Ecuadorian countryside. The steady jet of steam and gas frothing from the ice-capped mouth of the volcano seem to melt into the clouds.

Off the highway, a dirt road leads to Mulalo, a small farming town, 30km from Cotopaxi. A green street sign stands innocuously at the side of the road. Evacuacion Hacia – towards evacuation – it reads, pointing in the direction of Tanicuchi, 580 metres away, which the government has designated as gathering point in the event of an eruption.

Large volcanic boulders lie by the side of the roads, a reminder of the devastation wrought by the volcano in 1877.

Today, the town of 12,000 people resembles a ghost town. Tiny, bronze locks and a few stray dogs guard rows of small, abandoned houses with red flags fluttering at the top to signal that they fall within the risk zone.

Around 4,000 people left Mulalo when Cotopaxi first spewed ash in August, and only about 40 percent of them have returned since.

The town is quiet with just a few shops open and a school nearby where a handful of children still attend classes.

Before August, there were 800 pupils studying here, but close to 200 of them have left along with their families for nearby towns.

Dr Raul Amaya Perea and his daughter visit the town to conduct regular eye check-ups for the pupils.

“The basic problems for children that are caused by the Cotopaxi ash are allergies. Almost 80 percent of the kids here have conjunctivitis because of the ash,” Perea said.

Learning in the shadow of Cotopaxi

Children wrapped in grey fleece overalls with the rainbow coloured motif of Ecuador emblazoned on their chests, play in a school compound that overlooks Cotopaxi in the distance.

There are safe rooms for the children here in case of ash fall, but if an eruption is significant, teachers are supposed to escort the children to the nearest safe zone – a 20-minute walk away – from where their parents are expected to collect them before heading to designated safe zones, chosen based on the impact of previous eruptions.

Government assurances and evacuation drills have done little to allay the fears of anxious teachers who say that they have been putting on a brave face and sticking to a routine for the sake of their students.

“We think we are prepared because the government has a plan, but this is only in theory, we will know what happens when it happens,” said Narcisa Rivadeneira, the vice rector at the school.

“We still don’t know where the rations will come from. There is no information. All the residents of Mulalo are supposed to go to Roselle but it is not [big] enough for all the people. More than upset, I am worried,” Rivadeneira continued.

Mario Rocha Niza, the head of the local government in Mulalo, indicates a small patch of concrete that is supposed to serve as a meeting point for thousands of families should the volcano erupt.

“If the volcano erupts, then God help us,” he said.

“Right now there’s [a] yellow alert but if there’s [an] orange alert and if the eruption is big then people will be directed to go [to] the Pan American Highway,” Niza explained.

Cotopaxi has been emitting ash for more than seven months. Early warning systems of electronic sirens have been installed and volunteers have been provided with walkie talkies. They will be notified, by SMS or Whatsapp messages, by those monitoring the volcano if there is a change to the alert level. In the case of a red alert, the men have been made reponsible for going door to door to notify residents and sound the alarms.

Simulation drills have been conducted in three provinces in the risk zone, with sirens sounded and announcements made in different languages. Portable water supplies, evacuation routes, education and health services were all part of the drill.

A budget of more than $67m has been allocated for contingency measures in case of an eruption, the effects of which may be exacerbated by the El Nino weather pattern in the region as that places a further stress on existing resources.

The elderly and the sick left behind

At the southern foot of Cotopaxi there are dozens of small farming communities. These isolated homes are far from the evacuation zones.

In San Ramon, locals say only 20 of the 150 families who lived there remain. Many are elderly and too frail to flee by themselves should the volcano erupt. Most hope that family members will be close enough by to take them to safety in such circumstances.

Sixty-four-year-old Zoila Maria Toctahuano lives with her husband and a pack of dogs in a thatched hut propped up by thick boulders. Strong gusts of wind disburse flecks of ash across her land. A thin, surgical mask given to her by the local authorities isn’t enough to stop them from reaching her lungs and making her ill.

If there’s an erruption, she and her husband will have to walk across isolated dirt tracks for a distance of 10km to reach the nearest evacuation zone.

She says she was promised that government officials would come and rescue them. But, she added: “Only God knows what will happen, we don’t know anything. If the time comes, we will die, we can’t leave the house alone.”

The foothills of the Cotopaxi mountain is a site of vast, gated, flower plantations. This is where Ecuador produces millions of fresh flowers to sell in international markets. The country is the world’s third-largest exporter of cut flowers, three-quarters of which are roses.

Deco Flor is one of the largest plantations at Via San Augustin, producing 1.5 million rose buds of different colours every month. Many of those buds are exported abroad.

After the first emission in August, thousands of roses were covered in ash, making them unfit for export. The plantation owners lost thousands of dollars.

In Machachi, cattle owners saw a decrease in milk production when the ash destroyed acres of pasture in August. Some of them have been forced to sell and at times kill their cattle. The Ministry of Agriculture has now despatched mobile vet units in the affected regions and given out tonnes of cattle feed.

“Right now farmers are getting a preview of what might happen if and when there is a substantial explosion similar to those in the past,” said Susan Poats, an anthropologist and director of Grupo Randi Randi, an Ecuadorian non-profit organisation that promotes sustainable development.

“If farmers must sell their cattle because they have nowhere to lodge them or feed for them, they often face greatly reduced prices because many others are trying to sell as well,” Poats said.

“Some large farms have already moved their cattle to other areas, sometimes relying on relatives who farm outside the risk areas.”

It’s a busy time for Ecuador’s Secretariat of Management of Risks, the agency that oversees and informs the public about the government’s contingency plans.

Cotopaxi is South America’s most closely monitored volcano with scientists and volcanologists using a variety of cameras, sensors, instruments and seismic reading devices to detect any activity.

“When the levels of uncertainty are high, we have to prepare for the worst,” said Maria del Pilar Cornejo, the former Secretary of Risk Management, who was preparing a contingency plan after the first signs of activity.

For now, thousands of people are caught in a strange waiting game – going from one drill to another, unsure when or if the sirens will go off for real.

Priyanka Gupta reported from Ecuador on a fellowship from the International Reporting Project (IRP). 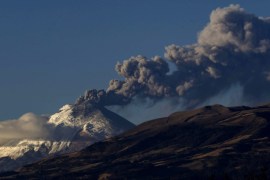 Cotopaxi explosions send columns of steam and ash high into sky as locals struggle to herd sheep and cattle to safety. 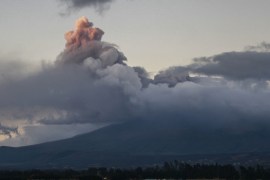 State of emergency in Ecuador as volcano spews ash