For the five days leading up to December 20, 2013, South Sudanese government soldiers from the Dinka tribe went from house to house killing members of the Nuer tribe in what quickly turned into a civil war that has claimed tens of thousands of lives.

Two years ago, Juba resident Gabriel Gatluak Dak Yau, a Nuer, fled South Sudan for the safety of Kakuma refugee camp in Kenya. He recalls the events of those dark days in Juba, and explains why he is making plans to return to his home country.

What happened in South Sudan at that time even the young kids know. Imagine, they were telling people go and rape your mother and your sister, and after you rape them then they will kill you.

And they were telling people to eat the meat of your brother. And imagine, you are all South Sudanese together. If you have a mark [the Nuer have tribal scars across their foreheads] they will definitely kill you, because they know you are really Nuer.

It was not all the Dinka. It was those from Warrap state. They say that [Nuer leader] Riek Machar killed people in Bor in 1991, and they decided that they were going to take their revenge.

I really give thanks to God because when the attacks happened I was on the other side of the River Nile in the Gumbo area of Juba. If you tried to cross the river they would just take you and put you inside the river, they would just kill you. They killed eight of my relatives. They just rounded them up and killed them.

Not all the Dinka have a problem with Nuer. Not all Dinka support [President] Salva Kiir. The only person who called me in December 2013 to ask me if I was OK was a Dinka friend of mine. “Gabriel, are you fine?” he asked me. “Yes I’m fine,” I told him, “I’m in the UNMISS camp.”

Our relationships haven’t been broken by the war. We still have relationships with them. The one who asks if you are OK when you are in trouble – you cannot forget him.

I spent one month and a half in UNMISS. On February 27, 2014, I left there to go to Kakuma refugee camp in Kenya.

It was very difficult to get here. I was afraid that if I travelled by plane that they would take my passport in the airport.

So I used a bus. When I reached the bridge across the Nile, soldiers there asked me: “Where are you going?” I told them: “I’m going to Kakuma.” They told me: “You want to escape?” I told them: “No. I’m not going to escape!”

They said: “You are Nuer, we are going to kill you.” I told them: “No problem.” Fortunately one of the security guards came and said: “Let these people go.”

I didn’t travel with any of my family, but I travelled together with some of the Nuer. Most of them were boys. They don’t have marks. If you have no marks, sometimes it’s an advantage.

I’m staying with my brother in Kakuma, who I left here when I went back to Juba. I really appreciated seeing him again. To be apart from your brother is hard sometimes. When we met again I really gave thanks to God. We’d been apart for almost five years.

My brother has been here for more than 10 years. He’s at school – in Form Four. He is supposed to complete his education first and then he can go back to South Sudan.

When I arrived at Kakuma the first time, it was really different from how it is now. You’d maybe get water once a day, but now it is available. At that time you’d go to school, then go to get water, then cook. But if the dust came you could not even cook.

I owe my health to UNHCR, and I have a ration card from them. But there’s not enough food. We used to get rations every 15 days, now it’s once a month, even though it’s not more food.

It’s very hard to manage. If I have my ration card alone I will not survive. We come together in a group of 10 and collect the food. You may get sorghum, or maize, they give you oil and salt.

If it is only one person it’s very hard to survive unless you have someone who can assist you somewhere. Maybe someone in South Sudan or in Africa can send money to you and you can go and buy a sack of maize.

The top officials at UNHCR don’t know that this food is not enough.

I want to go back to UNMISS camp in Juba, because here in Kakuma it is too difficult. Being in the camp without any education is very hard. I wanted to get a diploma in computing, but it’s very hard to get the funds for a computer. Even if I don’t get to work at UNMISS at least I will get to be with my people.

The only problem with going back is the killing. Nowadays I hear there is a lot of killing there.

If you have these marks they know you are Nuer and they will kill you. UNMISS really saved the lives of people. If you go outside [the UNMISS camp] and you get killed then it’s up to you because you are the one who wants to get killed.

The problem now is that when you go back you might have lost your parents, your relatives, your friends. South Sudan has been completely destroyed. 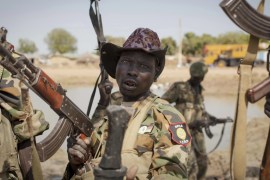 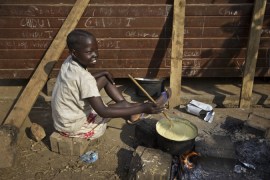 US to give extra $83m in aid to South Sudan