Du, 64, a former accountant in a state-owned company, delved into China’s stock markets after her retirement two years ago. She didn’t travel abroad or play mahjong with her neighbours. As her husband kept working, she was left with plenty of time on her hands.

“Some people go on holidays – trading stocks is my thing,” she told Al Jazeera. “It was also to keep my brain functioning. You know, when you buy stocks, you have to do research, keep track of the news.”

When China’s stock markets started tumbling in mid-June after rising more than 150 percent in 2014, the value of some of her investments nose-dived by 60 to 70 percent.

“On some equities, I have lost lots, lots of money. But I had made so much cash before this summer’s market correction that basically now I am back on my feet. Luckily, my initial sum is still there.”

Trillions of dollars were wiped from global stock markets in August after China, the world’s second-largest economy, suffered massive financial losses. Chinese social media soon lit up with stories about investors jumping to their deaths after losing huge amounts of money.

In China, small investors such as Du make up 80 percent of the total daily volume traded on Shanghai’s SSE and Shenzhen’s SZSE, the country’s two main exchanges.

Trading stocks here is a national hobby and huge swaths of the Chinese population – including cab drivers, students, retirees, young graduates, and hairdressers – having tried their luck after the two exchanges first opened in 1990.

“Our stock market is still at the early stage of its development,” said Oliver Rui, professor of finance at the China Europe International Business School (CEIBS) in Shanghai.

“But you have to remember it was the same in the United States before the 1970s. Back then, the US stock market was also dominated by small individual investors.”

China, still, is unique in one aspect: The country has one of the world’s highest gross savings rates – 50 percent of GDP, according to World Bank data – but it offers limited investment channels. Chinese households, for example, were not allowed to own and trade gold bars until 2004.

The lack of social security safety nets also means stock markets are seen by middle-class investors as an instrument to improve their living standards.

The predominance of individual investors in China’s stock markets nevertheless brings many challenges to Beijing.

To begin with, individual shareholders are more likely than institutional investors, such as banks or funds, to sell-off indiscriminately when things turn bad.

In case of panic, they believe that eventually the government will rescue them, and this is exactly what happened in the last few weeks.

“Private investors cannot tell the difference between an undervalued and an overvalued stock. They just gamble,” said Rui.

By contrast, he said, when the market slows, institutional investors buy undervalued “bargain” stocks. When the trend is up again, they will sell overvalued shares. In the process the market is pulled back to its equilibrium.

The dominance of private investors also pushes for more state intervention. China’s government is all the more likely to intervene given the market is driven by middle-class members such as Du, who themselves form the support base of the country’s one-party state.

This, in turn, leads Chinese private investors to take more risks, as they expect that Beijing will ultimately step-in if things go south.

“It’s not healthy for the market. Individuals are usually short-term oriented. They get in and out quickly, and they don’t have professional knowledge,” said Rui.

“In case of panic, they believe that eventually the government will rescue them, and this is exactly what happened in the last few weeks.”

Last July and August, the Shanghai Composite Index lost a combined 25 percent amid a massive market correction and a $4.9 trillion sell-off.

It’s now part of everyday language in this ancient nation, where gambling and gaming have been favourite pastimes for generations.

As China’s stock markets mature, however, institutional investors are likely to have a greater say in the future.

“In Taiwan, we have four million active stock traders, but 1,000 of them actually behave like institutions and invest very large amounts,” said Huang Naikuan, vice president of the Taiwan Stock Exchange (TWSE), in a phone interview from Taipei.

“It’s very likely that China will witness the same evolution. There are so many rich individuals there. They might not be very knowledgeable about finance, but they have a lot of money and they can become heavyweight traders,” Huang said.

On August 23, China allowed its huge state pension fund, roughly $548bn, according to the government’s Xinhua news agency, to invest up to 30 percent of its total net assets in domestic stocks. Previously it could only invest in treasury bonds and bank deposits.

While these emergency measures might provide temporary relief, the problem is that China previously had gone in the opposite direction.

“The current bubble started forming in March this year when articles in state-controlled media were announcing a bull market. This gave too much confidence and many small investors rushed in,” said Ding Yuan, vice president and dean of the CEIBS school in Shanghai.

“What happened in China should be taken very seriously. Economists separate the stock market from the real economy, but all the money lost over the past few weeks was 100 percent real,” Ding said. 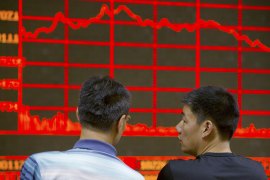