Fifty years ago today, the Berlin Wall was erected in haste across the bleeding heart of Germany’s capital. The sudden and speedy construction of this East-West divide on the night of August 13, 1961, caught many Berliners by surprise, and those that tried – with increasing futility – to circumvent the barrier often became its victim.

These victims – not only those killed or imprisoned trying to cross the wall, but families separated by the partition for more than a generation – are commemorated at a newly upgraded Berlin Wall Memorial. With the German chancellor and president attending such a memorial for the first time, it is an unprecedented act of remembrance since, while Berliners have been happy to celebrate the fall of the wall, most have wanted to forget about its construction.

From the moment the Berlin Wall fell on November 9, 1989, Berliners not only rejoiced, but also quickly tried to remove every trace of their so-called Schandmauer, or “Wall of Shame”.

“It was like, grab a hammer and knock it down. Get rid of this, just tear it down,” remembers Martin Hirsch, only a teenager at the time. From what he can recall, no-one gave much thought to preserving any of the wall, or commemorating it.

Hirsch was born in West Berlin, but his parents had escaped into the enclave city from East Germany in the late 1950s. When the wall went up in August 1961 – an act of desperation by the GDR regime to stem the daily exodus of 1,500 East Germans into the West – Hirsch’s grandmother was caught in the East. Though his father was later able to pay US diplomats to smuggle her to the West in the boot of a car, other family members never made it. By 1989, the Hirschs couldn’t wait to purge their wall.

But from the other side of the wall, some felt differently. “My mother cried for hours when the wall fell,” says Norbert Polster, a 37-year-old East Berlin native who spent his first 16 years in an apartment that faced the wall. His mother had worked faithfully for East Germany’s ruling Socialist Unity Party (SED) and loved her country. “She was very sad. With the wall gone she lost her beliefs, her life, her job,” says Polster.

Polster’s mother, who has remained unemployed since the GDR regime collapsed, will not commemorate August 13. “It’s not just one day. She spends her whole life thinking about it,” he says.

The politics of remembrance

Hope Harrison, associate professor of history at George Washington University, was flying to Berlin from New York the day the wall fell. Unaware of the sudden turn of events, she listened, stunned, as the pilot announced that they “were about to fly into history”.

Then working on her PhD, Harrison soon scoured newly accessible Soviet and East German archives to write a definitive history of the politics behind the building of the wall. Today she is back in Berlin, and is trying to understand the recent shift in Berlin’s approach to the wall’s commemoration.

“It went from: ‘Get rid of it, we never want to hear about it again’; to: ‘Wait a minute, this is a really important part of our history and we need to remember it and teach our children and our grandchildren about it’,” says Harrison.

“The wall was literally standing in the way of connecting streets, and metro stations, and canals, and rivers. On both sides the feeling was: ‘Let’s rebuild the city of Berlin, let’s look to the future and not the past.'”

In 1990, only a few Berliners fought to preserve parts of the wall. Prominent among them was Willy Brandt – Mayor of West Berlin when the wall was built, and later West German Chancellor – who was convinced that future generations would forget the wall’s significance once it was gone. Few listened to him.

Another advocate for preservation was Manfred Fischer, who remains the Pastor of the Church of Reconciliation that once lay in the path of the wall. “He literally sometimes stood in front of the wall preventing bulldozers from removing it, saying we have to have a commemoration, a memorial,” explains Harrison.

For a long time, Germans argued that commemorating victims of the GDR regime would mean downplaying those that suffered under the Holocaust – for many, the latter was a far more serious historical legacy.

But the impasse on how to appropriately memorialise victims of these two 20th century dictatorships was finally resolved via a resolution in the German Federal Parliament in 2008.

“They basically said, we can commemorate both without downplaying the uniqueness of the Holocaust, and without belittling the crimes of the East German regime,” says Harrison.

With money already allocated by Federal and State governments to better preserve vestiges of the wall, and to create a more significant memorial for the victims, the real work of reconciling this past, so often avoided by Berliners, could begin – nearly 20 years after the Iron Curtain folded.

Bernauer Strasse [street] in central Berlin was a key watermark throughout the 28-year history of the Berlin Wall. This was the scene of the infamous moment – captured on film – where a defecting East German guard, Conrad Schumann, leapt across the barbed wire of a fledgling wall into the promise of West Berlin.

Here also, desperate East Berliners jumped out of their apartment windows into the West – until their escape hatches were bricked up.

Later, in 1985, the towering, neo-gothic Church of Reconciliation, a monument long stranded in the “Soviet occupation zone” on the Bernauer Strasse “death strip”, was razed – since, used as an observation tower and visible from the West, the symbol of the church-turned-military base was seemingly bad PR for the regime – the aforementioned Pastor Fischer, overseas at the time, was not even told his marooned church was to be flattened.

The Polster family too lived up the road from Bernauer Strasse, along the same stretch of wall – meaning Polster’s father, a policeman, could easily, often late at night, attend to trouble on the border. This was a few blocks up from where the first wall crossing opened so exuberantly in 1989.

Some traces of the wall survived in Bernauer Strasse, due in part to the work of Pastor Fischer, who built a new church on the site of the one he lost. There, amid remnants of the main wall, and the smaller inner walls that sectioned “the death strip”, Fischer established the first Berlin Wall Memorial in 1998.

But what was a humble memorial site has become a major city monument in recent years as government and citizens have come around to the idea of commemorating the wall.

When German Chancellor Angela Merkel, attends the 50th anniversary commemoration of Mauerbau [“wall building”], a large second stage of the memorial will be unveiled as a symbol that the city has begun to reconcile this past – compared, however, with the extravagant 20 year fall of the wall celebrations nearly two years ago, this event will remain relatively circumspect.

Axel Klausmeier is the director of the Berlin Wall Foundation, which manages the Berlin Wall Memorial. From his third floor office, you look directly across at arguably the most pristine section of the wall, including an original guard-tower – one of only a couple that survived the wall’s rapid deconstruction.

“We bought that tower on eBay,” Klausmeier explains, adding that it had been authentically repositioned on an original concrete base.

These remnants are hard to find, and Klausmeier, who, in 2001, executed the first detailed inventory of the scant remaining traces of the wall, knows how difficult it can be to satisfy a wish – especially among tourists – to see more of Berlin’s most renowned monument.

But while some have pushed for reconstruction of the wall, Klausmeier, and the architects who won a 2007 competition to build the memorial, have been adamant that any rebuilding would be in bad taste. “We said we can not possibly reconstruct the sheer horror and the fear that the wall produced,” says Klausmeier.

Instead, breaks in the original wall have been re-imagined using rusted metal columns spaced apart to allow visitors to walk among them. Meanwhile, metal lines in the ground mark the inner walls. Wandering around, one appreciates the elaborate and intractable scale of what the GDR euphemistically called “the anti-Fascist protection barrier”.

The best-known landmark at the site – part of the first section that opened in 2009-10 – is the Window of Commemoration, showing images of all 136 “known” people killed, usually shot dead, while trying the breach the wall. The memorial also honours the larger numbers who languished in prisons for attempting to penetrate the barrier.

Visitors to the site seem to feel its importance. A British couple who spoke to Al Jazeera were glad they’d finally found part of the wall at Bernauer Strasse – none of the wall survives, for instance, at the iconic Checkpoint Charlie.

“It’s good the way you can see where people jumped out of buildings. You get a sense of what actually happened here,” they said. The couple seemed visibly affected. “The people went through so much, it really should be remembered. It’s a pity that they tried to black it all out.”

The service of memorial

But talk to Berliners who grew up with the wall, and attitudes to memorials and commemorations are mixed – indeed, a survey released this month [Deutsche] showed that one in five East Berliners – and more than a third of all Berliners – believe the building of the wall was justified.

“It’s only recently that they feel we ought to do this. It feels manufactured, like there’s no real emotional background to it,” says Anne Wizorek of the August 13 commemoration.

Wizorek, 29, grew up in the suburbs of then East Berlin and remembers chipping away at the wall with hammers alongside her family in 1989 – chunks of the wall were sent by the Wizoreks as presents to family in the West before the divided clan were finally reunited that Christmas.

Wizorek, who still lives in East Berlin, says the Berlin wall is “overly fetishised”. “It’s much bigger than just the wall. Maybe [it] tells people more about the daily life in the GDR than just the crimes,” she says.

Interestingly, Wizorek has never properly visited the Berlin Wall Memorial. Norbert Polster has never visited the site either, even though he grew up just metres away.

It’s as if the initial ambivalence about remembering the wall remains for those who lived on either side of it.

Polster, who, like his mother, despaired that the wall collapsed, is now glad it’s gone; but he’s not sure about how to commemorate it.

“I think it would be nice to remember the Berlin wall, but also to remember all walls that exist today.” 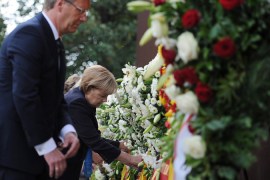 Mayor says he was appalled that some supported the view that there were legitimate reasons for building it in 1961. 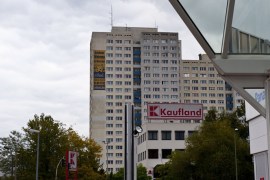 The new face of East Germany

One district of Berlin is regenerating former communist housing in the hope of restoring its declining population. 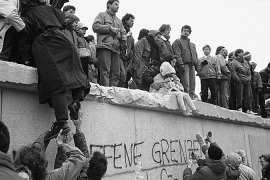 Similarities between the iconic events in Europe and in Cairo’s Tahrir square examined. 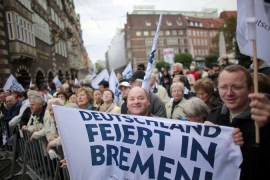 Street parties and official events planned to mark the unification of East and West Germany.