Shares in Life Insurance Corp of India (LIC) slid 6 percent in their market debut on Tuesday, a fresh setback for the state-owned giant after its IPO, while record-breaking, raised far less for the government than initially envisioned.

India’s biggest insurer and largest domestic financial investor was trading at 887 rupees ($11.7) as of late morning, giving it a market value of about 5.6 trillion rupees ($72bn) and making it the country’s fifth-biggest company.

“We were not expecting a big listing as markets were jittery, expect it to pick up,” LIC’s Chairman MR Kumar told reporters.

LIC’s weak debut comes even as stocks in India and the broader Asian market rallied on Tuesday. The sale of equity in the 65-year-old behemoth, which is synonymous with insurance in India, was oversubscribed nearly three times, riding on the enthusiasm of policyholders who received a 60-rupee discount and bid multiple times for the shares on offer.

Should the stock fail to recover, its poor listing is set to disappoint millions of small-time investors who bid enthusiastically for the issue because of their long and emotional association with the insurer and its products.

The government, which had positioned the sale as the first and biggest of a wave of privatisations aimed at replenishing state coffers, raised roughly 205 billion rupees ($2.7bn) from selling a 3.5 percent stake in India’s largest-ever IPO.

That compares with a fundraising goal of about 300 billion rupees ($3.9bn) in April that was in turn halved from earlier expectations after investors pushed back against lofty valuations. Initial government estimates had valued LIC at about 17 trillion rupees ($225bn).

LIC’s is the fourth-largest deal among global IPOs priced this year. It comes when there is a dearth of large-size offerings in financial hubs from New York to London and Hong Kong. There has not been any listing exceeding $1bn in Hong Kong or Europe so far this year. 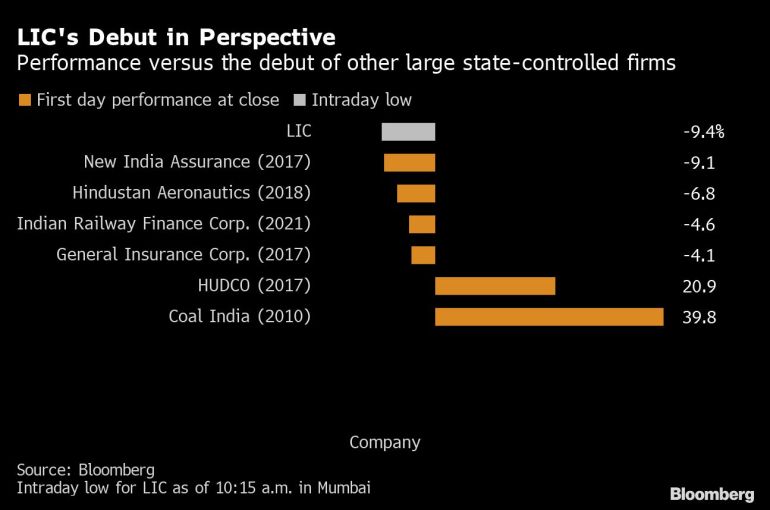 LIC is the latest in a string of Indian companies that have fallen sharply after listing as investors looked closely at potential profitability and questioned valuations.

Fintech firm Paytm plunged in its debut last November following a $2bn IPO, at the time India’s largest, and its shares are now worth not much more than a quarter of their IPO price.

Other big listings such as food delivery firm Zomato Ltd and cosmetics retailer Nykaa are also trading at large discounts to their IPO prices.

LIC dominates India’s insurance sector with more than 280 million policies. The 66-year-old company was the fifth-biggest global insurer in terms of insurance premium collection in 2020, the latest year for which statistics are available.

LIC’s Kumar said the company will focus on higher-margin policies as well as improving its digital offerings and bank partnership distribution network to arrest the fall in market share, adding that he expects the market share to stabilise around current levels.

Macquarie Research’s Suresh Ganapathy said LIC will find it challenging to shift into higher-margin policies as rivals have an established presence in that segment. He started coverage of LIC with a price target of 1,000 rupees ($12.89) and a neutral rating.

Investors have also been concerned that LIC’s investment decisions, including those in loss-making state companies, could be influenced by government demands.