The Indian government expects to raise the sum, just a third of its original target, by selling a 3.5 percent stake in the country’s top insurance company, giving it an initial value of $78.52bn.

In the hours after the IPO was opened to retail subscribers, Indian stock exchanges fell as the country’s central bank announced a surprise increase in the key policy rate.

The subscription, which opened on Wednesday and is set to close on May 9, will offer a discount to employees and retail investors of 45 rupees ($0.58) per share. LIC policyholders will be offered a discount of 60 rupees ($0.78) per share.

The final IPO price will be determined after the subscription closes. 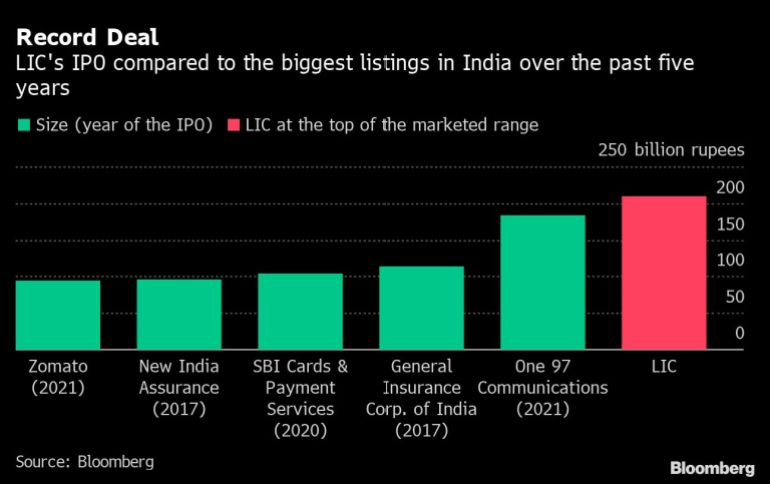 The 59.3 million shares set aside for anchor investors were subscribed at 949 rupees ($12.41) apiece. Norwegian wealth fund Norges Bank Investment Management and the government of Singapore joined the anchor book, along with several domestic mutual funds.

The government had initially wanted to list LIC in the financial year that ended March 31 but chose to delay the sale after Russia’s invasion of Ukraine and the US Federal Reserve’s interest rate tightening triggered a market rout.

The 66-year-old company dominates India’s insurance sector, with more than 280 million policies. It was the fifth-biggest global insurer in terms of insurance premium collection in 2020, the latest year for which statistics are available.

At the upper band of the issue price, LIC shares are being offered at “a significant discount to peers”, said Yesha Shah, the head of equity research at Samco Securities. “Given the attractive valuation, the downside from here seems limited. Further, the fact that a discount has also been offered to retail investors is the cherry on the cake.”