By Kaelyn Forde
Correction20 Sep 2021
A previous version of this story incorrectly stated the amount of dollar-bond interest due from Evergrande on September 23. The copy now reflects the correct amount, which is $84m.

China Evergrande Group is deeply in the red – to the tune of $300bn. And concerns are mounting that if it defaults on its debt, it could spell disaster for China’s property market and send shock waves through the world’s second-biggest economy.

A reckoning appeared even closer on Wednesday after Bloomberg News, citing people familiar with the matter, reported that the real estate developer may not be able to make the interest payments on some of its $300bn in liabilities next week and could also miss a principal payment on at least one of its loans.

It’s the latest development in the real estate behemoth’s saga, which is being closely watched in China and around the globe.

Evergrande is currently the world’s most indebted real estate developer. The central question is whether Chinese authorities plan to allow Evergrande’s creditors to suffer major losses or whether the country’s communist government, which prizes stability and control, will intervene in some way to avoid a messy default and the damaging ripple effects it could trigger.

Here’s what you need to know about Evergrande and the impact its current financial situation could have on China and the global economy.

Start at the beginning. How long has Evergrande been in business?

Evergrande was founded in 1996 in the Chinese province of Guangzhou by Hui Ka Yan.

Hui graduated from college in 1982 and worked in a steel factory before founding Evergrande, according to Forbes, which lists his current net worth at $11.4bn, making him the 53rd richest person on its Billionaires 2021 list and the 10th wealthiest on its China Rich List 2020.

The 62-year-old is currently Evergrande’s chairman.

How many projects does the firm currently have?

Evergrande currently has 1,300 real estate projects in 280 cities in China, according to its website.

It has also expanded to other industries, including electric vehicle production, property management, film and TV, theme park construction, life insurance, a hospital, a football club, and the production of food, mineral water and baby formula.

Wow. And how big are those other endeavours?

The company’s property management arm, Evergrande Property Services, has approximately 2,800 projects in 310 cities in China encompassing a total contract area of more than 680 million square metres, according to the firm’s website.

And its Evergrande New Energy Vehicle has set the ambitious goal of developing 14 electric vehicle models ranging from sedans to sport utility vehicles and producing and selling five million of them per year by 2025 and five million by 2035.

The firm’s media company, Hengten Networks, includes a streaming platform known as Pumpkin Film that said it had 20.1 million paid subscribers by the end of May, and a film and TV production company called Ruyi Film.

Evergrande also boasts a sports team, Guangzhou Evergrande FC, which is one of the best-known football clubs in China. But it isn’t a money-maker: the firm loses an estimated $155m to $310m on its football-related ventures annually, Bloomberg Intelligence analysts Dan Wang and Daniel Fan wrote in a recent report.

Got it. So how much trouble is Evergrande in?

Some $300bn of it, according to liabilities listed by the company, and Evergrande’s inability to make timely payments on the interest and principal amounts of its loans has investors inside and outside of China worried.

It’s also sparked protests among homebuyers, investors and even members of the firm’s staff who have shown up outside of Evergrande’s offices to demand company officials meet with them.

On Thursday, security personnel in Shenzhen hauled off protesters who had gathered outside the company’s headquarters, some of whom chanted, “Evergrande return our money,” the Reuters news agency reported. In addition to investors, some of the protesters said they were vendors the company had failed to pay.

Yikes. What does Evergrande say?

It looks like things are set to go from bad to worse.

In a statement (PDF) on Tuesday, company officials said they expect contract sales to continue to decline this month, “thereby resulting in the continuous deterioration of cash collection by the Group which would in turn place tremendous pressure on the Group’s cashflow and liquidity”.

What has Evergrande done to try to stave off the crisis?

The firm has hired financial advisers Houlihan Lokey and Admiralty Harbour Capital to help “assess the Group’s capital structure, evaluate the liquidity of the Group and explore all feasible solutions to ease the current liquidity issue and reach an optimal solution for all stakeholders as soon as possible,” the board said in its Tuesday statement.

But other measures to raise cash have so far failed. Evergrande said the sale of its massive 18,580-square-metre office tower in Hong Kong, the China Evergrande Centre, “has not been completed within the expected timetable”.

And so far, it has been unable to sell part of its interests in its electric vehicle and property management arms, Evergrande New Energy Vehicle Group Limited and Evergrande Property Services Group Limited.

How are investors reacting?

Nervously. Evergrande’s shares have fallen a whopping 81 percent since the beginning of the year, and its dollar bonds have fallen towards record lows.

Moody’s Investors Service downgraded Evergrande and its subsidiaries on September 7, citing a negative outlook. Fitch Ratings made the same move, downgrading the company’s rating and writing that it views “a default of some kind as probable”. 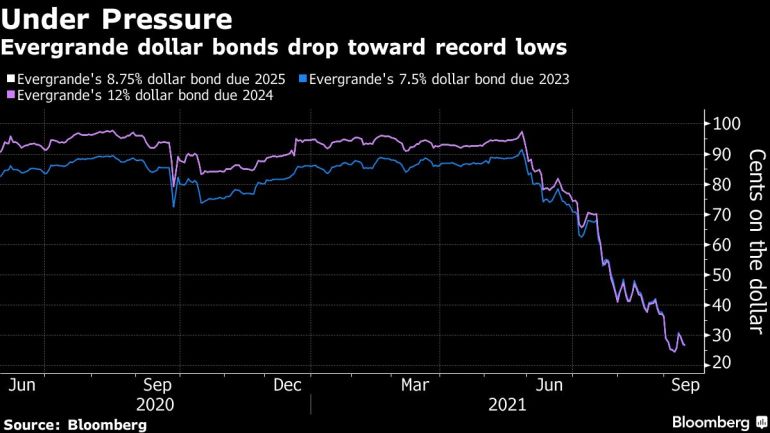 So what will happen next?

That’s the billion-dollar question. Evergrande has about $84m in dollar-bond interest due September 23, Bloomberg News reported.

But the firm’s board seems to be bracing for the worst.

“In view of the difficulties, challenges and uncertainties in improving its liquidity as mentioned above, there is no guarantee that the Group will be able to meet its financial obligations under the relevant financing documents and other contracts,” the board said in its Tuesday statement.

“If the Group is unable to meet its guarantee obligation or to repay any debt when due or agree with the relevant creditors on extensions of such debts or alternative agreements, it may lead to cross-default under the Group’s existing financing arrangements and relevant creditors demanding acceleration of repayment,” they added.

And what about China’s government?

All eyes are also on the Chinese government to see if it will step in and help Evergrande out of the crisis. Authorities in Guangdong have already rejected at least one bailout request from the firm’s founder, Bloomberg News reported.

But allowing Evergrande to fail could have ripple effects throughout China, leading to both financial turmoil and civil unrest, two things that President Xi Jinping and his risk-averse government are very keen to avoid.