After a years-long campaign to tame property prices, China is upping the ante to break a stubborn cycle of gains that’s made homes increasingly unaffordable.

In recent days, China jacked up mortgage rates in a major city, vowed to accelerate the development of government subsidized rental housing, and moved to increase scrutiny on everything from financing of developers and newly-listed home prices to title transfers. Echoing Xi Jinping’s famous words that “housing is for living in and not for speculation,” Vice Premier Han Zheng added that the sector shouldn’t be used as a short-term tool to stimulate the economy.

The intensified focus on real estate — an industry that was already under the scanner — mirrors broader crackdowns on businesses such as education that are seen as widening social inequities. As China’s economy slows and President Xi tries to increase the nation’s birth rate, the policies underscore the Communist Party’s growing resolve to respond to mounting dissatisfaction with hoarded wealth and narrowing avenues for advancement.

“China’s property sector has been one of the biggest sources of discontent and the government is hell bent on controlling prices so it doesn’t lead to social unrest,” said Beijing-based Liao Ming, a founding partner of Prospect Avenue Capital. “The measures echo the policy curbs in education in that they are aimed at easing public angst against inequity.” 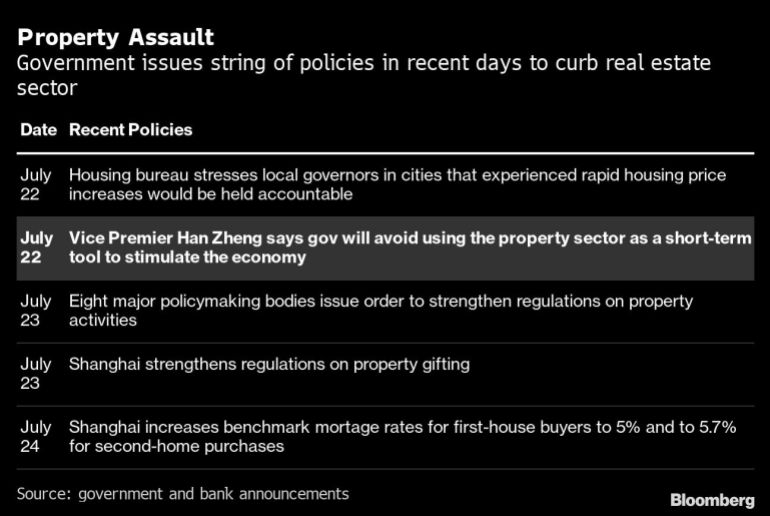 While China has spent years trying to cool property prices, analysts say this round of crackdowns will be different. One clear signal came in Vice Premier Han’s comments on steering away from using real estate to provide short-term boosts for the economy.

“In the past, Beijing has consistently used the property sector to stabilize overall growth,” Nomura analysts led by Lu Ting wrote in a research note, adding that they expect Beijing to change its playbook. Policy makers won’t lift property restrictions this time partly due to concerns about a systemic financial crisis, the analysts wrote.

Another signal came from the unusually large number of government entities that vowed recently to strengthen measures on everything from project development and home sales, to rental and property management services. Eight policy bodies said in a joint statement that they would step up penalties for misconduct. In the line of fire will be developers that default on debt repayments, delay deliveries on pre-sold homes or elicit negative news or market concerns.

Local bureaucrats’ careers are on the line. Officials in cities that lack sufficient regulations and experience rapid price spikes will be held accountable, Zhang Qiguang, an official for the Ministry of Housing and Urban-Rural Development said on July 22.

On Monday, commentary from state-media Xinhua urged governments across the nation to keep home prices at a reasonable level and make it an urgent task.

“New residents and young people can’t afford to buy or rent good homes,” the editorial said. “Those problems are especially acute in cities with population inflow and metropolises.”

Investors have responded by selling property stocks, with the recent stream of news piling pressure on developers that were already being pressed to deleverage and meet China’s “three red lines” on debt metrics.

China Evergrande Group shares were little changed as of 14:13 p.m., after plunging more than 40% in just under two weeks. A Bloomberg Intelligence index of 33 major Chinese developers mostly traded in Hong Kong dropped for a fourth consecutive day on Wednesday. 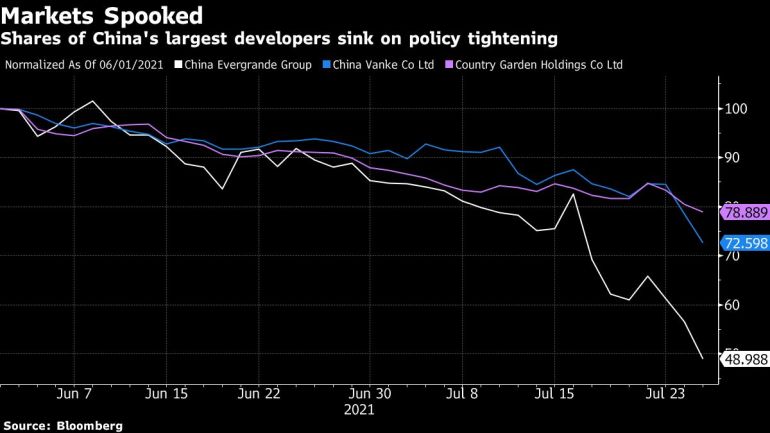 “Owning property is one of the key ways in which income inequality has worsened in China so the clamp down will come and will be severe,” said Alicia Garcia Herrero, the Hong Kong-based chief economist for Asia Pacific at Natixis. The cost of mortgages will increase, particularly for those with multiple homes, as will things like property taxes, she estimated. 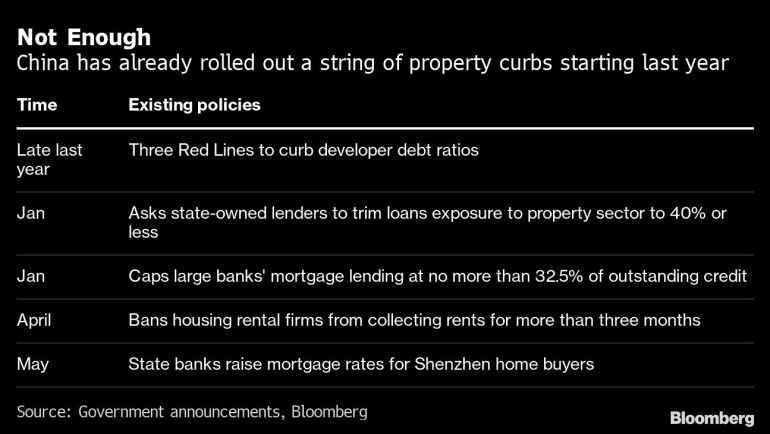 “The nation’s leaders are looking at this issue from a bigger point of view, property isn’t just a economic tool, it sits at the root of all social economic and political issues, and must be dealt with,” Ren said.

The Chinese government needs to maintain a delicate balance. The real estate sector accounts for 13% of the economy from just 5% in 1995, according to Marc Rubinstein, a former hedge fund manager who now writes about finance.

Policy missteps could have unintended consequences for the banking system. Chinese banks had over 50 trillion yuan ($7.7 trillion) of outstanding loans to the real estate sector, more than any other industry and accounting for about 28% of the nation’s total lending.

But all signs point to the government’s determination to ensure social stability, even if it spells near-term turmoil for capital markets. Just in June, Guo Shuqing, chairman of the China Banking and Insurance Regulatory Commission, warned against betting that property prices will never fall.

“Property is the single most important source of financial risks and wealth inequality in China,” said Larry Hu, head of China economics at Macquarie Securities Ltd. It “is worth watching.”