By Tugce Ozsoy and Burhan YuksekkasBloomberg

The Turkish lira is falling out of favor with local investors again and it risks compounding a depreciation that’s dragged the currency to successive record lows over the past month.

Residents bought a net $1.7 billion of foreign currency in the week ending Oct. 8, according to the latest central bank data, snapping a three-week run of sales — the biggest in half a year — that had helped take the edge off the rout.

With the prospect of another interest-rate cut looming large after the ouster of three key policy makers on Wednesday night, the fear now is that households and companies will switch back into dollars and euros en masse. The lira fell as much as 1.1% to a fresh all-time low of 9.1883 per dollar on Thursday. 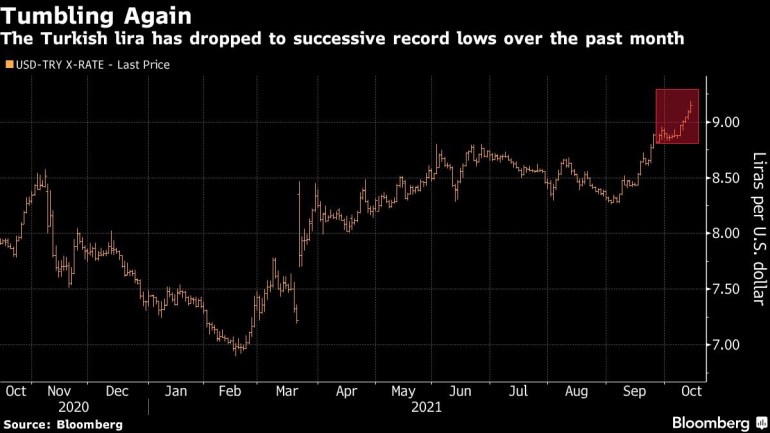 Foreign-currency purchases by local investors could put “extra pressure on the Turkish lira,” said Onur Ilgen, the head of the treasury at MUFG Bank Turkey in Istanbul, noting that the recent stretch of sales was motivated by profit-taking.

Residents hold $234 billion of foreign currency, equivalent to around half of all deposits. While they’re nibble traders — buying dollars when the lira is strong and selling when it’s weak — over the longer-term they tend to accumulate hard currency.

It’s a hedge against the inflation that’s debased the lira and eroded their savings. The Turkish currency is on track for its ninth straight year of depreciation, having lost more than 80% of its value since the end of 2012, the most in the developing world after the Argentine peso.

“If locals become more concerned about the effects of lower interest rates on the lira, there is room for Turks to switch more deposits from liras into dollars,” said Nick Stadtmiller, director of EM at Medley Global Advisors in New York.

Last month, the central bank unexpectedly reduced interest rates to 18%, even with inflation running just shy of 20%. Investors say policy makers are falling in line with Erdogan’s call for lower interest rates while ignoring the risks to the outlook.

Speculation is building that the president is now paving the way for another cut after he fired three members of the central bank’s interest-rate setting committee in a midnight decree.

Which side of the trade residents decide to take over the coming days and weeks also matters because foreign investors have already exited the market. They now hold less than 5% of the local-currency government debt stock, down from close to 30% in 2013.

“I think the downside risk for the lira with easier monetary policy is through domestic flows – not foreign outflows,” Stadtmiller said.

One redeeming factor for the lira is that a credit growth is slowing, which should help narrow the current-account deficit, reducing demand for foreign exchange in Turkey, according to Evren Kirikoglu, an Istanbul-based independent strategist.

Data on Monday showed the economy posted its first monthly surplus since Oct. 2020.

But even then, with the lira breaching the psychologically important 9-per-dollar mark this week, local investors could “stop and even reverse” their foreign-currency purchases, Kirikoglu said.