Olive harvest season is under way across the occupied Palestinian territories.

About 80,000 to 100,000 Palestinian families rely on the olive harvest, which takes place every year between October and November, for their income – including more than 15 percent of working women.

According to the Palestine Trade Center, or PalTrade, the olive sector is worth between $160m and $191m in good years.

Traditionally a festive season, this year’s harvest is once again overshadowed by tight Israeli restrictions, settler attacks and a weaker yield due to harsh climatic conditions.

The olive and olive oil industry

Olive trees have been cultivated across Palestine for thousands of years and have become a symbol of Palestinian resilience against Israeli occupation.

Almost half of all cultivated land across the occupied West Bank and Gaza is planted with an estimated 10 million olive trees (PDF). The small green or black stone fruits are primarily used to produce olive oil, which is never missing from a Palestinian dinner table, as well as table olives, pickles and soap.

The Palestinian city of Nablus has long been renowned for the production of olive oil soap which is rich in antioxidants and gentle on the skin. 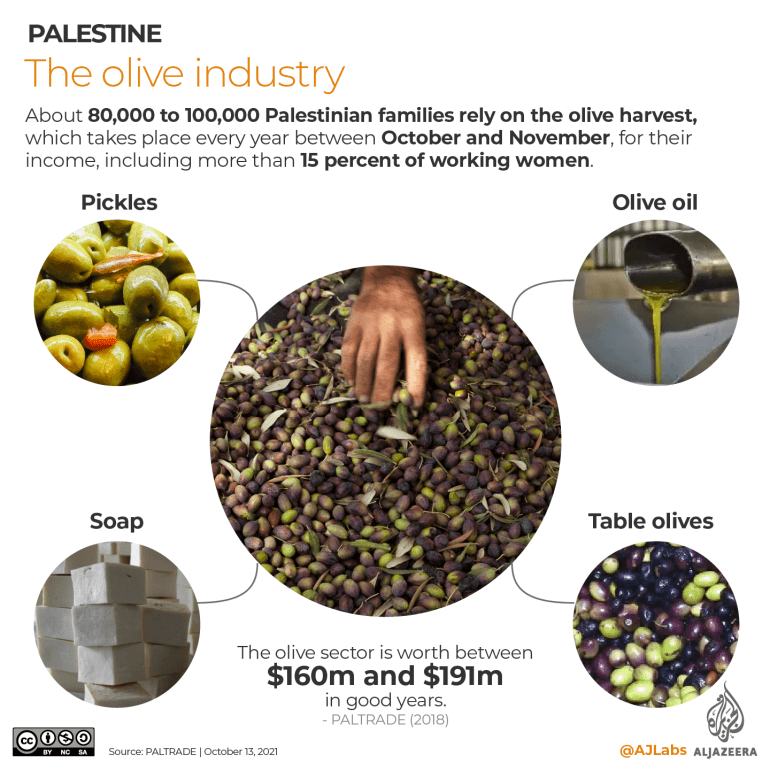 The governorates of Jenin, Tubas and Northern Valleys produced the highest quantity of olive oil at 10,442 tonnes, followed by Tulkarm (6,031 tonnes) and Gaza (5,582 tonnes). 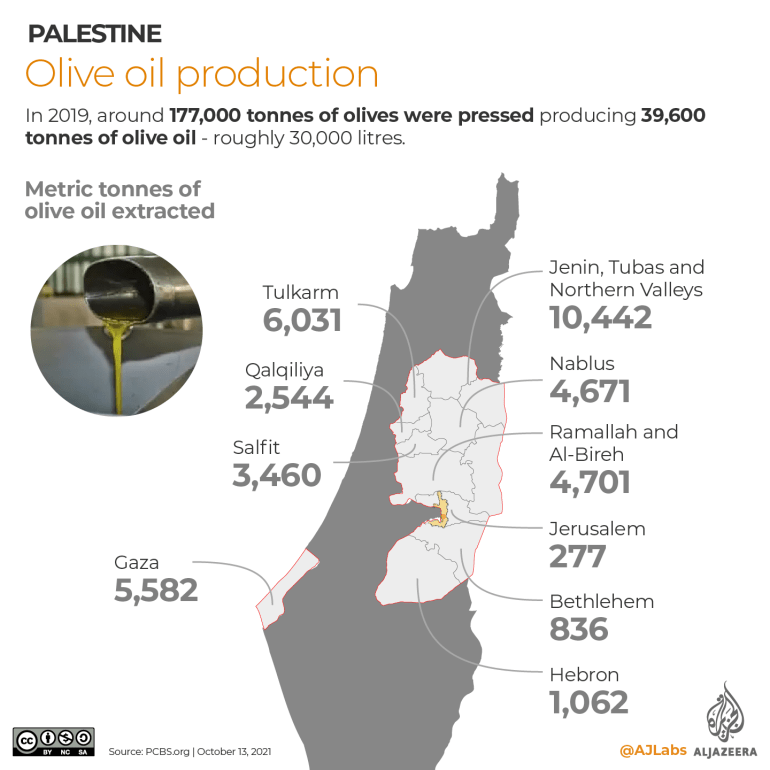 A study published in 2012 by The Applied Research Institute Jerusalem (ARIJ) estimated that since 1967, Israeli authorities have uprooted 800,000 Palestinian olive trees in the West Bank.

In the past year alone, more than 9,300 trees were destroyed in the West Bank, according to the International Committee of the Red Cross (ICRC).

Besides the physical destruction of these olive trees, many Palestinian farmers in the West Bank require Israeli permits to access their land in restricted areas near illegal Israeli settlements.

Israeli settlements are Jewish communities built illegally on Palestinian land. Today, between 600,000 and 750,000 Israeli settlers live in at least 250 illegal settlements in the occupied West Bank and East Jerusalem.

Palestinian farmers are forbidden from accessing much of their land in areas close to settlements, except for a few days a year. According to human rights group HaMoked, permit approval rates have been declining over the years. In 2020, only 24 percent of land access permits were approved. 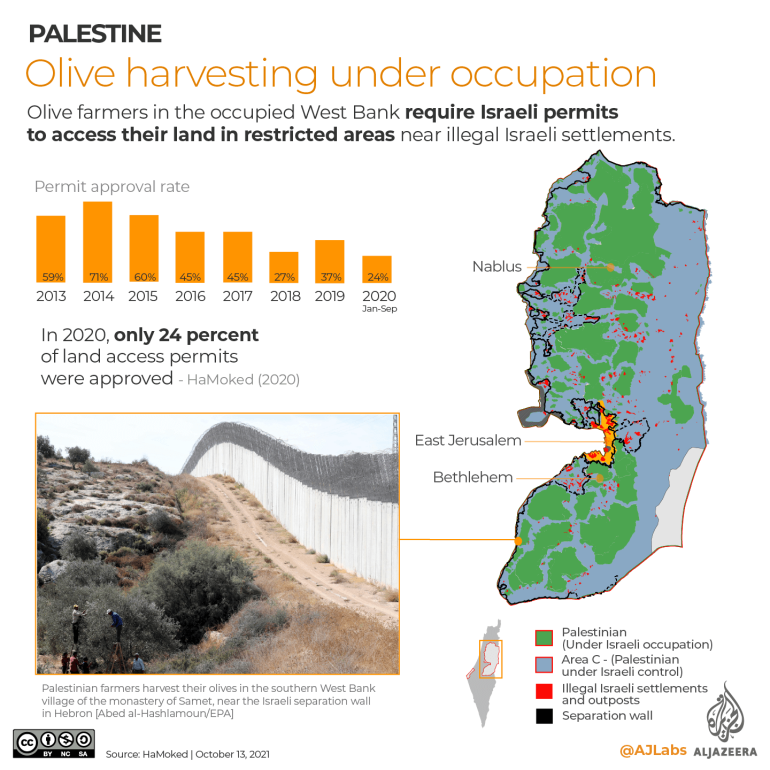 During the 2020 olive harvest season, OCHA documented at least 26 Palestinians injured and more than 1,700 trees vandalised.

As of October 4, 2021, the UN group for humanitarian affairs recorded at least 365 settler attacks against Palestinians. This week, a 10-day campaign to aid and protect farmers was launched in areas considered to be at high risk of Israeli settler attacks.

The campaign, organised by the Union of Agricultural Work Committees (UAWC), will cover 12 villages, mainly across southern Nablus, but also in the Ramallah and Bethlehem areas.

Muayyad Bsharat, head of advocacy at the UAWC, told Al Jazeera the main aim of the campaign is to “strengthen control over our natural resources, by getting Palestinian farmers to their lands in Area C [under full Israeli control], and to other areas under threat by the Israeli occupation”. 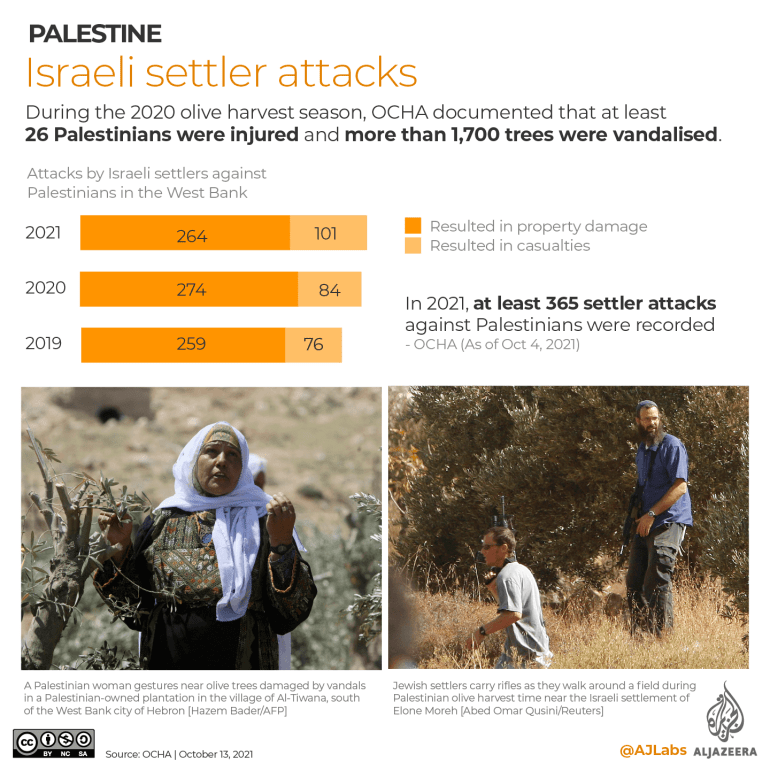