Asian stocks faltered on Monday as unease over a new coronavirus strain that was shutting much of the United Kingdom offset news a deal had finally been struck on a long-awaited US stimulus bill.

The British pound slid 1.1 percent to $1.3370 after several European countries closed their borders to the UK as the country entered a tougher lockdown to fight a new strain of coronavirus.

Prime Minister Boris Johnson will chair an emergency response meeting on Monday to discuss international travel and the flow of freight in and out of Britain.

That combined with the lack of a Brexit deal to cut 1 percent off FTSE futures, while EUROSTOXX 50 futures shed 1.5 percent.

MSCI’s broadest index of Asia-Pacific shares outside Japan dipped 0.2 percent after hitting a string of record peaks last week. Japan’s Nikkei reversed early gains to be down 0.6 percent, off its highest level since April 1991.

In the United States, Republican US Senate Majority Leader Mitch McConnell said an agreement had been reached by congressional leaders on a roughly $900bn COVID-19 relief bill.

The news saw futures for the S&P 500 index jump at first, only to fade to a loss of 0.1 percent as the session progressed.

Analysts at Bank of America (BofA) noted that a huge $46.4bn flowed into equities in the latest week, while the outflow from cash was the largest in four months. There were record flows into technology shares and large flows to the consumer, healthcare, financial sectors, real estate and value stocks. 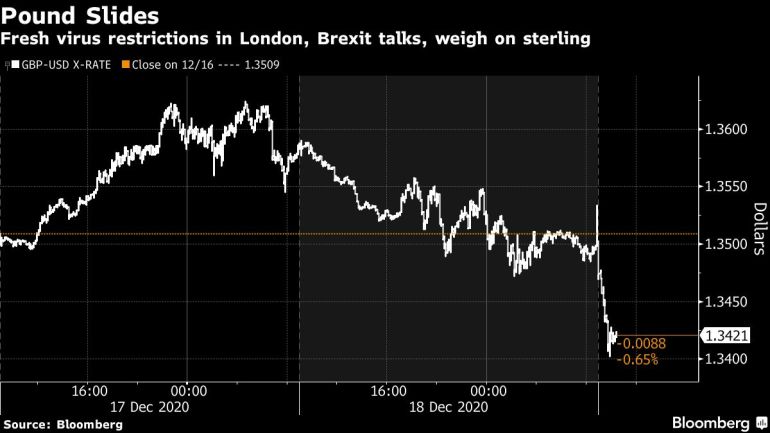 The dollar also found support from a Nikkei report that Japanese Prime Minister Yoshihide Suga told Finance Ministry officials in November to make sure the dollar did not fall below 100 yen.

The general risk-off mood saw gold prices gain 0.8 percent to $1,895 an ounce. Investors tend to buy assets such as gold when they anticipate broader economic uncertainty.

Oil prices ran into profit-taking after notching up seven straight weeks of gains, with travel restrictions in Europe a further blow to demand.