Alphabet Inc. hit a milestone on Thursday, as a rally in the stock took it above a $1 trillion valuation for the first time, solidifying the dominance of technology and internet stocks as the biggest titans of Wall Street.
Shares rallied in the last half hour of trading to close at $1,450.16, up 0.8% on the day.

With the gain, Alphabet became the newest member of an elite club to trade with the historic 13-digit market capitalization. Only two other U.S. names are past the threshold: Apple Inc., valued at about $1.38 trillion, and Microsoft Corp., at $1.27 trillion. Globally, the list is topped by Saudi Aramco, Saudi Arabia’s national oil company, which went public last month and currently has a market cap of about $1.8 trillion. 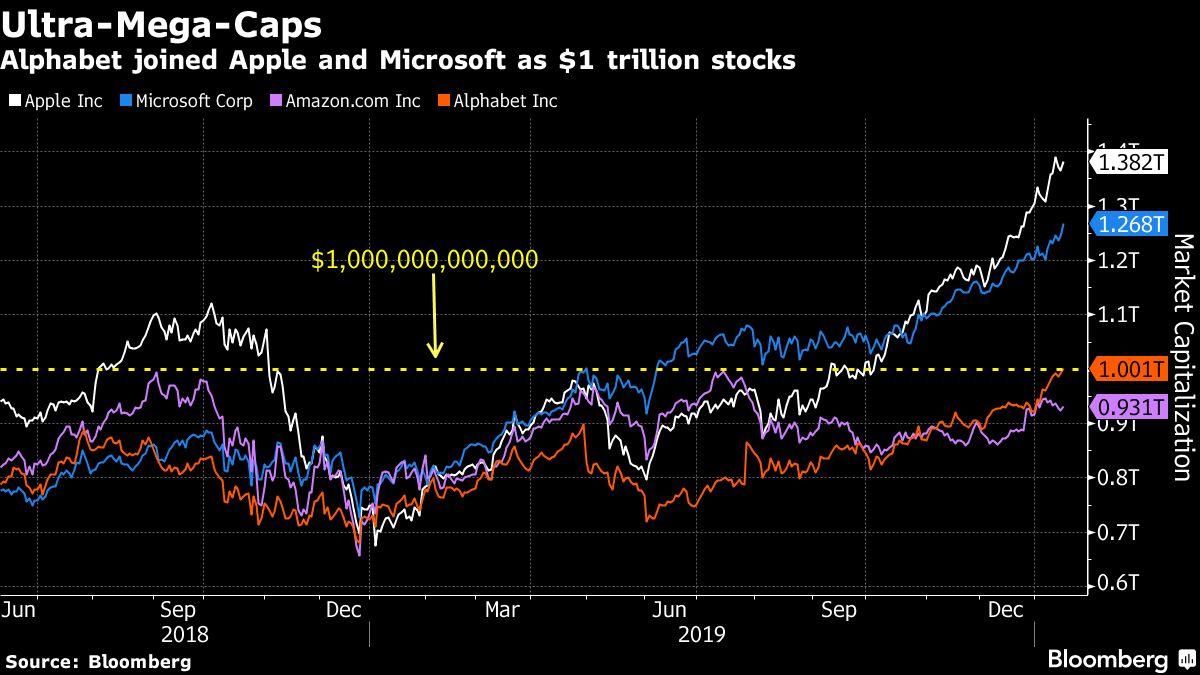 Amazon.com Inc. flirted with the level last year, but the e-commerce company would have to rise more than 7% for its current valuation of $931.1 billion to return above $1 trillion.

These four companies are by far the largest on Wall Street, and their huge size gives them an outsized impact on overall market direction. Together, they represent more than 15% of the weight of the S&P 500.

The rest of the market is, at best, hundreds of billions of dollars away from trillion-dollar valuations. The fifth-largest U.S. stock by market cap, Facebook Inc., currently has a valuation of $632.9 billion. The biggest company outside the tech or internet sector is Berkshire Hathaway Inc. in sixth place, valued around $559 billion.

Alphabet’s move above the level is just the latest step higher for the Google parent company. Shares are up about 40% from a June low, with the rally largely fueled by optimism over its 2020 prospects, particularly with respect to ad revenue. Alphabet will report fourth-quarter results on Feb. 3.

Among recent commentary, Evercore ISI raised its price target on the stock to $1,600 from $1,350, writing that it expects the company will continue “to compound on its defensible dominance in Search and video advertising with YouTube.” Earlier this week, Deutsche Bank raised its own target to a Street-high view of $1,735, writing that the stock “trades too cheaply.” The firm cited more ad product launches, an expanded stock buyback program, and “improving competitiveness in the Cloud business.”