Johannesburg, South Africa – President Cyril Ramaphosa of South Africa heads to court on Thursday to face off against his country’s public protector in a corruption case centring on a key member of his cabinet. Ramaphosa considers the hearing a “measure of last resort” to confirm he fulfilled his duties as president.

The case is just one more blow for the 25-year-old democracy, which is already buckling under the weight of deteriorating economic conditions and infighting within the ruling African National Congress (ANC).

Thursday’s urgent hearing will determine whether Public Protector Advocate Busisiwe Mkhwebane can compel Ramaphosa to discipline the country’s Public Enterprises Minister Pravin Gordhan for approving full retirement benefits for a former government tax official when he was minister of finance in 2010.

As South Africa‘s public protector, Mkhwebane can investigate impropriety at all levels of government. She is demanding that Ramaphosa must discipline the public enterprises minister within 30 days of receiving her report. But, Ramaphosa argues, it would be premature to implement any remedial action beyond noting the report for now, since Gordhan is challenging the report in full.

Al Jazeera has reviewed court documents filed by both sides. For her part, Mkwhebane submits that “the constitutional work of the Public Protector will be undermined, stifled and incapacitated” if Ramaphosa’s plea is granted.

In his filings, Ramaphosa says “It is a constitutionally unpalatable state of affairs to have the Public Protector, the Minister (and now, the President) being embroiled in litigation against each other.”

Analysts argue that the widespread anger over the country’s worsening economy has emboldened Ramaphosa’s opponents.

“Recent events have exposed Ramaphosa to conflict on many fronts, making it difficult for him to retain control of the party,” political analyst Ralph Mathekga told Al Jazeera. “There is an opposition (to the president) within the ANC.”

Key amongst Ramaphosa’s promised reforms was an investment drive and the overhaul of state-owned enterprises, especially Eskom, the national power company.

As part of plans to resuscitate Eskom, South Africa’s Minister of Finance Tito Mboweni last week tabled a bill in parliament to provide an additional 26 billion rand ($1.8bn) to fund the debt-ridden company this year. The figure follows a 23 billion rand ($1.6bn) allotment to Eskom in February.

Adding to the country’s woes, Fitch Ratings service downgradedSouth Africa’s outlook from stable to negative last Friday. The rating agency predicts: “Continued in-fighting within the ANC is likely to draw attention away from policymaking.” 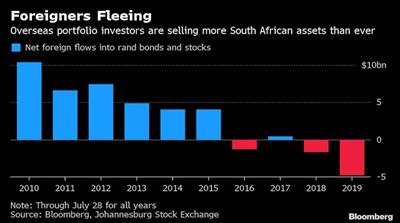 Making matters worse, according to the country’s statistics service, almost three out of every 10 South Africans seeking work – some 6.7 million people – cannot find jobs. The country’s unemployment rate is at its highest level in 10 years.

Ramaphosa maintains that he is determined to strengthen Africa’s second-largest economy: “We will continue with the urgent and critical tasks that are required to be embarked upon to grow our economy, to mobilise investments into South Africa, to create jobs and to reduce poverty,” he said on Sunday night.

Critics of Public Protector Mkhwebane say she is part of a faction of the ANC still loyal to former President Jacob Zuma, and is, therefore, determined to derail Ramaphosa’s plans.

“She has taken a side and she is allowing herself to be exploited by the fightback campaign who have got everything to lose,” says Associate Professor in Public Law at the University of Cape Town, Richard Calland.

In response to her critics, Mkhwebane has previously said: “I am a constitutional being.”

Mkhwebane’s office subsequently launched an investigation, which concluded – on July 19 – that Ramaphosa had “deliberately misled” parliament about the donation made by Gavin Watson, CEO of a controversial company formerly known as Bosasa, which had extensive government contracts.

In a February letter sent during the investigation, Ramaphosa had told Mkhwebane: “I was … not aware at the time that I appeared in the National Assembly … that Mr Gavin Watson had made a donation to the ‘CR17’ campaign.”

Mkhwebane maintained that the president violated an executive ethics code. She referred the matter to the speaker of parliament and instructed the chief prosecutor to investigate whether Ramaphosa’s campaign had laundered money through political donations.

Ramaphosa is now seeking an urgent judicial review of her report.