Qatar Airways will not cancel its remaining Airbus A350 order over delays with the delivery of the long-haul jets, its chief executive said.

But the delays with the delivery of the long-haul jets are down to the manufacturers, according to Qatar Airways CEO Akbar al-Baker.

“We are asking Airbus to deliver it faster,” al-Baker said at a Dublin news conference on Thursday. “The delay is from Airbus.”

When asked whether he was scrapping orders, he responded: “They have all our orders. They only need to deliver them to us.”

“I have to scream at Airbus to get my planes faster. I am nearly eight destinations behind schedule because of delays in aircraft deliveries. I hope this will be resolved during this year,” al-Baker said at the ITB travel fair in Berlin in March.

Later, Reuters news agency reported, citing an Airbus spokesman, that Qatar Airways cancelled orders for four A350s, worth $311m each, because of the delivery delays.

“We confirm that Qatar Airways has cancelled four of their contractual A350 delivery slots,” Reuters quoted the Airbus spokesman as saying. The decision was related to “known supply chain issues”.

Asked what would happen to the undelivered 283-seat jets, he said, “they will be reallocated”.

Meanwhile, Qatar Airways is to press on with plans to build a stake of up to 4.75 percent in American Airlines in the near future, al-Baker said.

The state-owned carrier notified American Airlines last month that it was interested in buying up to 10 percent of its shares but would not exceed 4.75 percent without the approval of American’s board.

“We will be able to start buying shares in the open market soon, depending of course on what is the share value,” he said, adding that the share purchases will start as soon as Qatar receives regulatory approval. 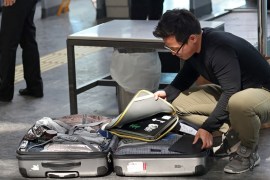 National carrier joins other Gulf airlines in allowing passengers to carry electronic devices on board to the US. 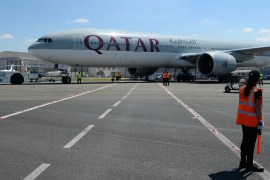 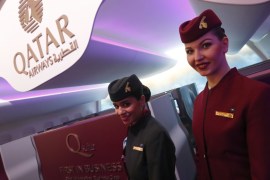 British carrier will use nine Qatar Airways planes and staff during a 16-day cabin crew strike.