The first American cruise ship in nearly 40 years to set sail for Cuba has docked in Havana harbour with more than 700 passengers on board.

The arrival of the Adonia on Monday evening marks the restart of commercial travel between the US and the island-state after five decades of hostile relations brought on by the Cold War.

The ship was the first US cruise ship in Havana since president Jimmy Carter eliminated virtually all restrictions of US travel to Cuba in the late 1970s.

Travel limits were restored after Carter left office and US cruises to Cuba only become possible again after Presidents Barack Obama and Raul Castro declared detente in December 2014.

The Adonia’s arrival is the first step towards a future in which thousands of ships a year could cross the Florida Straits, long closed to most US-Cuba traffic due to tensions that once brought the world to the brink of nuclear war.

The straits were blocked by the US during the Cuban Missile Crisis and tens of thousands of Cubans have fled across them to Florida on homemade rafts, with untold thousands dying in the process.

“During this entire normalisation process between the US and Cuba, there have been plenty of moments that few people thought they would see in their life time: one being a US president setting foot on Cuban soil, another being the Cuban flag atop its embassy in Washington DC,” he said.

The number of Cubans trying to cross the straits is at its highest point in eight years and cruises and merchant ships regularly rescue people on rafts from the straits.

US cruises are expected to bring Cuba tens of millions of dollars in badly needed foreign hard currency if traffic increases as expected.

More than a dozen lines have announced plans to run US-Cuba cruises and if all actually begin operations Cuba could earn more than $80m a year, the US-Cuba Trade and Economic Council said in a report Monday.

READ MORE: Remembering the founder of Ladies in White movement

“But on Sunday here in Miami, a new chapter in US-Cuba relations begins with this cruise ship.”

Al Jazeera’s Lucia Newman, reporting from Havana, said many observers saw the arrival of the Adonia as a “momentous” occasion.

“I asked the hundreds of people here [in Havana] who’ve been waiting for hours to catch a glimpse of the boat why they are so excited, and they are telling me they feel more separated by sea than by air.” 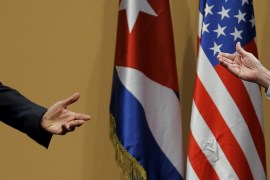 Unclear if images of unity, or open encouragement for Cubans to seek change, will be US president’s legacy in Havana. 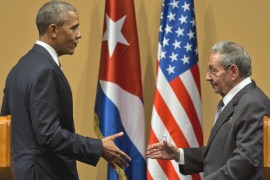 Can the US and Cuba trust each other?

Barack Obama makes history with the first visit to Cuba by a US president in nearly nine decades.