Imider, Morocco – For the past four years, residents of this remote Moroccan village in the Sahara Desert have been holding what is believed to be the country’s longest-ever protest.

Calling themselves “Movement on the Road ’96” – a nod to a similar protest held in 1996 – residents of Imider have set up an encampment of adobe huts on top of Mount Alebban next to a key water valve for a nearby mine. Since 2011, those in the protest camp, mainly subsistence farmers and migrant workers, have kept shut the valve to one of the mine’s biggest wells, to stop the use of the village’s groundwater.

The Imider Mine is operated by La Societe Metallurgique d’Imider (SMI) and owned by Societe Nationale d’Investissement (SNI), a private holding company owned by the Moroccan royal family. It is Africa’s most productive silver mine, helping to make Morocco the 15th-biggest silver producer in the world.

But Imider residents – who are mostly ethnic Amazighs, more than half of whom live on less than a dollar a day – say the mine has drained their water reserves for decades and devastated their agricultural community. According to a September 2015 report by the Global Amazigh Congress, an international organisation focused on the rights of Amazigh minorities, the mine uses 1,555 cubic metres of water per day, which is 12 times the village’s daily consumption.

Although the protest camp began when the village youth overtook the mountain, it has grown to include many villagers of all ages. Since most of the youth are unemployed, their presence is quasi-permanent, while those who have jobs rotate, using back trails to go back and forth from the village.

The protesters hope their encampment will pressure the government to end the mine’s overexploitation of the village’s water, to provide jobs to village residents and to establish a local school and hospital.

“We are the indigenous people of this land,” protester Hamid Battou told Al Jazeera. “And even though we have silver and all these minerals and resources around us, we don’t benefit from them.”

So far, the protesters estimate they have withheld more than three million tonnes of water from SMI since 2011. A 2014 report found that after villagers cut off one water source to the mine, SMI’s processing capacity dropped 40 percent in 2012, and 30 percent in 2013.

The villagers have engaged in various means of protest against the mine for nearly three decades, including a 1996 sit-in that blocked traffic on a road passing through Imider for 45 days.

“After the mine dug a well in 1986, the water problem started,” protester Omar Uxabassu told Al Jazeera. “Many farms were impacted by this illegal exploitation. Year after year, the percentage of farms and green space continues to decline.” After more silver was discovered in nearby Igourane in 2004, SNI dug more wells, he noted.

“[The mine] affects the lifestyle of the people. It affects agriculture [and] many homes and many sectors,” Uxabassu said. “There is no health, there are no jobs, and there is no compensation for all this exploitation.”

A report issued by INNOVAR, an independent hydrogeological group based in Temara, Morocco, found that the mine has had a devastating impact on Imider’s khettara system, a traditional underground canal network that has provided water to farmers in the desert region since the 14th century.

Explicitly attributing the decrease of water to the mine, the report found that the wells constructed by the mine in 2004 caused a 48 percent decline in water transported by the three khettaras in Imider between 2004 and 2005. In the same year, farmers’ wells dropped by 1.25 metres. There have been no additional reports since the 2004-05 study.

Speaking to JeuneAfrique, Youssef el-Hajam, a manager of Managem (a mining company of which SMI is an affiliate), claimed that according to a hydrogeological study, “there is no relationship between the mine’s water exploitation and the decrease of groundwater in the region”. However, according to JeuneAfrique, Hajam “didn’t wish to disclose the report”.

But on a company website, Managem has touted the mine as contributing to the development of the region, “notably in terms of infrastructure, with construction in Tinghir”. SMI’s construction projects include “a health centre, a mosque, a cultural centre, a nursery, sporting areas [and] housing for 300 families”, along with the expansion of local schools, according to Managem’s website.

However, the Imider activists say these contributions are insignificant and generally do not benefit their village. Instead, they say the main beneficiaries are the mine workers, who were brought from cities and reside in Tinghir, a large town to the east of Imider.

Villagers have also expressed concerns about toxic waste from the mine, and its impact on health, agriculture and water. Managem’s Hajam has said publicly that there is no risk, and that toxic materials are recycled in basins. But a 2013 investigation led by the Moroccan Association of Investigative Journalism (AMJI) found that the concentration of toxic elements such as arsenic, cobalt, cadmium and lead often exceeded international standards in the Imider region.

Although the AMJI investigation highlighted residents’ testimonies regarding the proliferation of skin diseases, respiratory diseases and cancer, no medical study has yet been conducted to determine whether there is a relationship between these diseases and the toxic materials in Imider’s soil and water.

Imider activists have been calling for independent health studies on the effects of the mine’s toxic output. “If we had independent studies that can prove the effect of the mine on Imider, I don’t think we would need to protest,” activist Moha Tawja told Al Jazeera.

The encampment holds regular general assemblies using the Agraw system, an ancient model of Amazigh democratic tribal governance. The assemblies draw men, women and children from the seven villages comprising Imider, who meet twice a week to assess the community’s situation and strategies.

From this process, villagers established a negotiating committee in 2011 to speak with representatives of SNI and the governor of Tinghir province. After 16 meetings, activists say the negotiations stopped with no progress made. The governor’s office did not respond to a request for comment .

Meanwhile, since 2011, 20 of the more outspoken villagers have been imprisoned, three of whom were recently released, according to the Moroccan Association of Human Rights.

One of those released, Lahcen Ait Ichu, served a sentence of two years and eight months in prison. Ait Ichu claimed that all of the arrests were based on trumped-up charges including theft, incitation to disobedience and destruction of public property.

According to Ait Ichu, the testimonies given by witnesses against him and other activists were baseless. “They accused me of assault with a weapon and theft,” he said. “The witness who claimed he was assaulted told the court that my face was covered, but that he recognised me from the shape of my body.”

Uxabassu said these arrests and charges were revenge for the villagers’ political activity, and that they mirror similar arrests targeting activists and journalists in Morocco’s urban areas.

“We villagers have observed the changes around us. We have conducted an ongoing struggle since 1986, and now have maintained the longest sit-in in Morocco’s history under harsh conditions,” Tawja said. “Anyone who hears our case should know that we’re serious.”

Morocco’s Ministry of Agriculture, Ministry of Water and Mines, and Ministry of Interior did not respond to requests for comment. 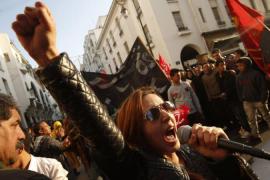 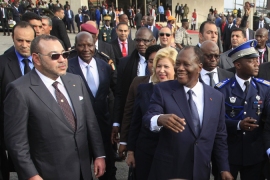 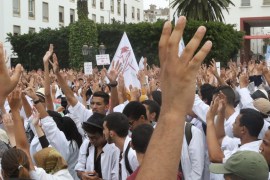 Striking medical students defeated a plan that required them to perform two years of civil service after graduating.