Classy centuries from Eoin Morgan and Joe Root propelled England to a seven-wicket victory over New Zealand in the fourth ODI in Nottingham to square the five-match series 2-2.

Chasing a testing target of 350 for victory, Morgan’s swashbuckling 113 off 82 balls and a more measured 106 not out from Joe Root helped England comfortably reach their victory target with six overs to spare.

This was England’s highest chase in their history and the fourth-highest ODI chase ever.

Earlier, a battling 90 from Kane Williamson and half centuries from Grant Elliott and Martin Guptill had helped the tourists reach 349-7.

“We set the tone early playing unbelievable cricket,” said Morgan who was adjudged man of the match.

“We thought their score was 25 over par but we played out of our skins. The carefree attitude is helping my batting, concentrating on the process rather than the result.”

A remarkably high-scoring series will now be decided in Durham at Chester-le-Street on Saturday. 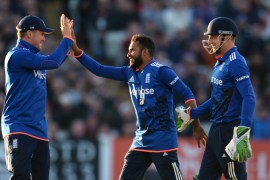 Buttler, Root score centuries as hosts put up their highest ODI total in the opening match.