Former Brazilian defender Cafu has announced he is to organise a charity football match hosted by Qatar to raise funds for the victims of Japan’s earthquake and tsunami.

The World Cup-winning captain’s initiative was inspired by his memories of lifting the trophy in the port city of Yokohama in 2002 when Japan and South Korea co-hosted the finals.

Cafu said the December exhibition would feature the 2002 World Cup players against a team of international stars. He said the rosters have yet to be finalised, but said none of the players will be paid to appear.

“An All Star XI will take on a combined Brazil-Germany team, mostly comprising players who represented these countries in the final of the 2002 FIFA World Cup,” said Cafu.

“We wanted to do something to help the people affected by the tsunami in Japan. Many of us enjoyed a wonderful time during the World Cup there in 2002. I felt it was our duty to extend a helping hand to them,” Cafu added.

QFA and AFC officials also said they were working on separate projects to help Japan. Qatar will host the World Cup in 2022. 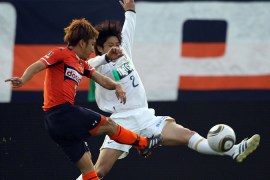 Matches off after Japan disaster

Asian Champions League fixtures in Japan postponed in the wake of devastating earthquake and tsunami.