Germany’s exciting young team came from behind to win third place in a scintillating clash with Uruguay in an appetiser for Sunday’s World Cup final.

Still absorbing the crushing disappointment of their semi-final defeats, Germany and Uruguay made sure their third place playoff on Saturday night was no irrelevant sideshow before Spain and Netherlands go for the main prize.

Both teams flew at each other from the off at Port Elizabeth, defying the miserable rainy conditions.

Sami Khedira’s late headed goal gave Germany a 3-2 victory after they had come back from 2-1 down in an end-to-end game.

Both Uruguay’s Diego Forlan and Germany’s Thomas Muller netted one to go joint top of the scorers’ table.

They reached five goals, together with Netherlands’ Wesley Sneijder and Spain’s David Villa who have an opportunity to better that on Sunday evening at Johannesburg’s Soccer City.

Forlan’s volleyed goal was typically spectacular for him.

He nearly equalised with a free kick in the last second of the match that struck the bar and symbolised the game’s drama.

“It just missed by a fraction,” lamented the striker who has won legions of new admirers with his brilliant performances in South Africa.

He and teammates will also rue the goalkeeping errors that aided two of Germany’s goals.

“I’m pretty tired but it’s over now and it’s time to have a rest,” Forlan added after the game.

Unfortunately for Uruguay, striker Luis Suarez was booed every time he touched the ball by Africans in the crowd who remembered bitterly his handball on the line that denied Ghana a certain goal and a place in the semi-finals.

Suarez’s new “Hand of God” was hailed as a heroic and instinctive act at home, but many Africans condemned his cheating.

As well as for coming third, German coach Joachim Loew’s team will be long remembered for their four-goal dismemberings of Argentina, England and Australia in earlier rounds.

Germany also took third place at the last World Cup which they hosted in 2006.

“We’ve done well here but next time we want to get to the next level,” said Saturday’s match-winner Khedira.

Spain have been gathering fans galore in the host country due to their slick passing football.

The Dutch, though, have won their last 14 World Cup games, including qualifiers, and will be quietly confident their own skilful players can match Spain’s famous midfield maestros.

Netherlands have an abundance of attacking talent, but Spain have struggled to get anyone on the scoresheet other than Villa.

England had a miserable World Cup, but they at least have a referee representing them in the final.

Howard Webb, 38, is the first Englishman to handle a World Cup final since 1974.

South African President Jacob Zuma was full of praise for his people’s enthusiastic contribution to the tournament.

“The committed support given to Ghana and other African teams displayed African unity, love and solidarity in practice,” he said in a statement on the eve of the final. 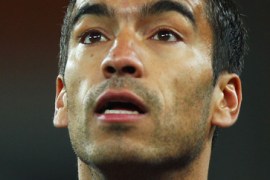 Captains on brink of history