On paper, Emmanuel Macron is an antonym to Donald Trump. Yesterday’s French presidential elections will have ramifications on both transatlantic relations and the Middle East. The two novice leaders, who never held elected office, have a choice to either mend fences, confront or manage their deeply rooted ideological and political differences.

After all, Macron officially declared his candidacy just one week after Trump’s election victory. That monumental shift in the United States, as well as the fallout from Brexit, became a wake-up call in French politics, causing people to start scrambling around the country to find an acceptable candidate to beat the far-right contender, Marine Le Pen. In that sense, Macron’s ascendance to power was meant to be the French rebuttal to the wave of populism and anti-globalisation in London and Washington. Yet, it’s not the first time that politics in both countries were so intimately intertwined and overtly polarised.

US-French relations hit a low between 2003 and 2008 following Jacques Chirac’s defiance of George W Bush’s invasion of Iraq. Nicolas Sarkozy’s honeymoon with Barack Obama was short-lived and the US in the past eight years favoured Germany as the main European interlocutor. Trump will now have a working relationship with a French leader who sought the endorsement of his nemesis, Barack Obama. The US president will need to make overtures after tarnishing the French pride during his campaign by asserting “Paris is no longer Paris”.

What they have in common though is a similar business background, and both are non-traditional and non-ideological leaders who claim to lead a movement. An independent centrist, Macron leans to the left on social issues and veers to the right on the economy. He believes in a “protective Europe”, which would strengthen Germany’s hand in trade negotiations with the US. The challenge is whether key differences on trade and climate change will cloud their cooperation on foreign policy and the Middle East.

While Trump’s source of inspiration is mostly Richard Nixon, Macron operates on a platform inspired by Charles De Gaulle, Francois Mitterrand, and Jacques Chirac. Hence, he might have no hesitation in diplomatically challenging US influence when it serves French national interests. He might even entertain the idea of playing up differences with Trump for domestic reasons.

Macron wants France to be an “independent, humanist, European power”, whereas Trump has an “America first” slogan strengthened by a hard power approach. However, both leaders are generally cautious in getting entangled in wars. Since Brexit became a reality, France has become the only European Union member holding a veto power in the United Nations Security Council, which will give Paris a unique opportunity to assert itself and might subsequently lead to occasional disagreement with Washington. Macron believes that European major powers should fill the vacuum of the US’ gradual retreat from the world, hence will be keen to raise doubts about the US-Russian coordination and even challenge it when needed.

PROFILE: Who is Emmanuel Macron?

Since both leaders have no clear doctrine, they share three similar trends: flip-flopping on issues from left to right; infighting between their team; and leading a conventional foreign policy. In a similar fashion to Trump, Macron has moved from suggesting a balanced approach in Syria last January to hinting a military intervention under the auspices of the UN after the Khan Sheikhoun chemical attack. While Macron believes in the “logic of building peace” rather than “the logic of intervention”, he seems, like Trump, to be more inclined to use surgical strikes when needed.

Macron's description during the election campaign of France's colonial past as 'genuinely barbaric' will give him credit to re-assert French influence in North Africa where the US role will be in retreat under the Trump administration.

US-French coordination in the Middle East

The only viable document to assess Macron’s programme, the platform he released last March, had little mention of foreign policy. While it is too soon to assess what foreign policy team Macron will have, his support comes from a wide spectrum; from those who have previously supported Jacques Chirac, Dominique Strauss-Kahn, and Francois Hollande. Even names such as defence minister Jean-Yves Le Drian, Jean-Claude Cousseran and Aurelien le Chevalier are among his supporters. While it took Trump three months to begin identifying with the US national security establishment, the new French president will have a head start as a conventional president.

Macron is closer to the US view that toppling Syrian President Bashar al-Assad should not be the prerequisite of every move in Syria. His stated focus is to cooperate with the US to fight the Islamic State of Iraq and the Levant (ISIL, also known as ISIS) and al-Qaeda, while attempting to secure a place for France on the table instead of having Washington and Moscow play it alone.

Like Obama, Macron has no clear stance on Turkey and wants to put Iran and Saudi Arabia on an equal footing. He seems interested in taking distance from Gulf countries unlike Sarkozy and Hollande before him. It is yet to be seen if he can get this balanced approach through the French establishment, however he will probably succeed given French economic interests in both the Gulf countries and Iran.

The new French president aims to refocus efforts in North Africa, the Sahel and the sub-Saharan Africa. He sees Libya through the lense of the refugee crisis and fighting terrorism, which might result in expanding military advisers in areas controlled by renegade general Khalifa Haftar while encouraging the latter to forge a unity deal with Libyan Prime Minister Fayez al-Sarraj. Macron’s description during the election campaign of France’s colonial past as “genuinely barbaric” will give him credit to re-assert French influence in North Africa where the US role will be in retreat under the Trump administration.

What to expect in the future

Impulsive characters, such as Bush and Sarkozy, have clashed with more reserved personalities such as Chirac and Obama. The same rule might apply now for Trump and Macron. While Chirac doubted US intentions to invade Iraq, Sarkozy pushed Obama to intervene in Libya. The lesson of Libya helped Hollande and Obama cooperate on Mali, while Hollande did not use his anti-Syrian regime policy to convince Obama to intervene in Syria. Both Hollande and Obama worked on the campaign against ISIL and Iran’s nuclear deal, but differed on who would lead the mediation in the Palestinian-Israeli conflict.

It is safe to say that the relationship between Trump and Macron will not be a replica of the one between Thomas Jefferson and Marquis de Lafayette, neither in substance nor in synergy. The coming four years will most likely extend two decades of cool transatlantic relations during which Washington and Paris managed their differences with a diplomatic face while occasionally bickering or cooperating in a case-by-case approach. The challenge and opportunity for both leaders are that neither has a doctrine nor a Middle East strategy.

Joe Macaron is a policy analyst at the Arab Center Washington, DC. 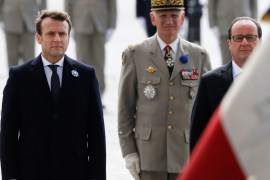 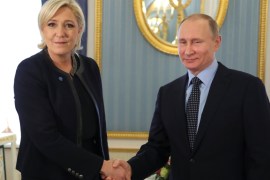