While Islamophobia is garnering Republican candidates more votes, it is also pushing Muslim Americans and their allies to the ballot box. The Muslim American population numbers in the millions, with critical masses in swing states such as Florida and Ohio.

Yet, rhetoric from the right pushing “Muslim bans”, “making the desert glow”, and mass deportation dragnets treats Muslims as a potential fifth column, not a constituency.

Which candidate’s policies are most in line with broader Muslim American values, interests and concerns, particularly given the rising tide of Islamophobia and Muslim scapegoating?

Bernie Sanders. By a far stretch.

READ MORE: Why I will vote for Bernie Sanders

Given the tremendous internal diversity of this demographic, the range of issues that comprise the domain of political concern to Muslim Americans is broad.

Given the tremendous internal diversity of this demographic, the range of issues that comprise the domain of political concern to Muslim Americans is broad.

The commonly held stereotype that Muslim Americans are only concerned with foreign policy issues glosses over the immediate interests of many American Muslims, including African Americans such as Muslim American congressman Keith Ellison who endorsed Sanders as did Muslim basketball icon and public intellectual Kareem Abdul-Jabbar.

While they are stereotyped as a wealthy and upwardly mobile demographic, a recent Pew Study found that 45 percent of Muslim Americans earn a household income just above the poverty line – making them a natural base group for Sanders (PDF).

Sanders’ economic policies illustrate that his social welfare programming and tax schemes would instantly advance the interests of nearly half of the Muslim American population.

Particularly, recent immigrant and African American Muslim communities, riddled by the highest poverty rates, and consequently exposed to the trappings of racialised poverty, lack of employment opportunities and profiling would particularly benefit from Sanders’ positions.

Sanders has long supported a higher minimum wage, and a progressive tax scheme that alleviates the burden on the poor and working class, and shifts greater responsibility on to the wealthy and closes corporate loopholes.

Sanders’ position on racism is less fully developed than his clear insistence on economically based justice through policy, yet he is significantly more progressive than Hillary Clinton.

In her scathing putdown of Clinton, The New Jim Crow author Michelle Alexander wrote the following about Sanders: “[He] promises a political revolution that will bring universal healthcare, a living wage, an end to rampant Wall Street greed, and the dismantling of the vast prison state – many of the same goals that Martin Luther King Jr championed at the end of his life.”

One could compare Sanders’ constructive engagement with the Black Lives Matter critique with Clinton’s dismissive response to activists from the same movement.

Furthermore, Sanders has consistently condemned the bigoted, anti-Muslim rhetoric that has become a staple of this presidential campaign season. Black and brown Muslims know only too well how Islamophobia compounds other forms of prejudice and discrimination – especially in the areas of racial and religious profiling by law enforcement, and protection from bias incidents and hate crimes.

To his credit, Sanders voted against the US PATRIOT Act and openly critiqued sweeping surveillance of Muslim Americans after 9/11, which presumes a similar stance against expanding counter-radicalisation (CVE) policing programmes.

Sanders’ immigration policy is in general accord with President Barack Obama’s position. He advocates for a clear path to citizenship for undocumented immigrants, and supports a waiver against deportation.

Approximately 10 percent of the undocumented immigrant community is Muslim, including those fleeing Iraq and Syria, and Sanders’ positions align with their interests.

On foreign policy issues, Sanders has distinguished himself as anti-war. He voted against the Iraq War in 2002, and routinely called for the US to withdraw troops from Iraq and Afghanistan.

In short, his foreign policy greatly favours non-intervention in foreign strife, particularly the Middle East. With regard to the fight against ISIL, Sanders looks to the Iraq War as a cautionary tale, stating that the US should not spearhead the fight.

Furthermore, he voted against the bombing of Syria. Every Republican candidate and Clinton have positioned themselves as unabashed supporters of Israeli Prime Minister Benjamin Netanyahu’s nightmarish vision of continuing Israeli occupation and atrocities against Palestinians.

The Republican candidates are vying to outdo one another in branding all Palestinians as “terrorists”, and Clinton has criticised Obama’s lukewarm relationship to Netanyahu. Many American Muslims hope that Sanders’ opposition to US militarism will result in a more even-handed approach to Palestine/Israel.

A great deal has been made of the “electability” of Sanders, which has pushed some Muslim Americans to identifying with Clinton, even though they prefer Sanders. There are two points to keep in mind: first, in the state primaries so far, Sanders and Clinton have an almost identical number of chosen delegates.

The difference comes from the so-called “super-delegates” that in the end will go with the popular vote. In other words, should Sanders’ campaign continue to do well, he is likely to surpass Clinton.

Secondly, almost every poll so far indicates that Sanders would defeat any Republican nominee, while the very high unfavourable rating of Clinton would have her narrowly lose to Donald Trump.

Surprisingly, it is Sanders who represents the combination of superior values and the best hope for winning in the general election.

Donna Auston is a PhD candidate in Anthropology, at Rutgers University. 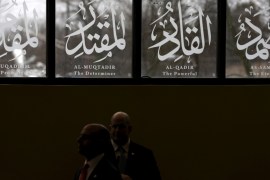 Obama’s Baltimore speech was not motivated by American and Muslim reconciliation.