Since August 16, 2012, South Africans have been coming to terms with the police killing of 34 striking mineworkers at the Lonmin platinum mine at Marikana.

This biggest massacre by police of civilians in post-apartheid South Africa continues to haunt the collective conscience of a nation.

South Africans should have made great strides in addressing inequality and ensuring better conditions for its workers, but they have not because of the continued dominance of the neoliberal economic discourse.

In many ways, Marikana has become the symbol of the global collusion between political and economic elites, fostering inequality and undermining fundamental human rights.

The tragic events at the mine were preceded by an unauthorised wildcat strike by several miners for better wages, which led to clashes with mine security, South African police, and the leadership of the established and politically connected union recognised by Lonmin management.

Horrific images of bloodied corpses laying in a rocky field just a two-hour drive from Africa’s economic hub, Johannesburg, will be forever embedded in the consciousness of ordinary South Africans with their long history of extreme forms of exploitation since colonial times.

Links to a repressive past

In the past, apartheid and colonial administrations went to great lengths to prevent people from gathering and demanding their rights in South Africa’s public places, underwriting an economy based on exploitation.

Pass laws were imposed to reinforce racial segregation, civic activists were regularly banned from attending or speaking at public meetings, peaceful public gatherings were often deemed illegal, and brutal force was used by police and the army to quell disturbances.

Still, in the face of such repression, South Africans resisted and protested.

During apartheid, such defiance of the state often carried deadly consequences, as was witnessed at the massacre at Sharpeville in 1960, when police killed 69 people protesting against pass laws.

... when governments and private businesses collude, democratic rights and constitutional principles can be reduced to mere words on paper.

It is commemorated as a public holiday in democratic South Africa, known as Human Rights Day.

The Sharpeville massacre occurred in the midst of a desperate struggle for freedom.

In contrast, the massacre at Marikana happened under a government elected by universal suffrage, a constitutional bill of rights unmatched anywhere in the world, and a healthy culture of public debate and free expression.

Three years on since the killings, as the findings of the official Marikana Commission of Inquiry were made public last month, citizen activists everywhere are asking how bloodletting on this scale could have happened in a democracy.

The answers to that question are neither easy, nor are they comfortable ones for the majority of governments around the world today.

Violation of rights on a global scale

CIVICUS, a global alliance of civil society organisations, has recently reported that although incidents on the scale of Marikana are not common, governments in almost half of the world’s countries significantly violated their citizens’ fundamental rights in 2014.

What is more, those violations took place in both authoritarian and democratic countries.

Notably, CIVICUS’ State of Civil Society report highlights that protests around the world continue to escalate, mainly because governments and international institutions are driven by elite interests and fail to address the issues that matter to most people.

Social exclusion, substandard delivery of public services, and the ever-widening gap between the rich and poor are driving protests from Brazil to India.

In South Africa, figures show that 2014 set a new record for the number of documented protests, with increasing numbers taking place in urban settings with abysmal public services, right next door to some of the best-served and most affluent suburbs in Africa.

Although South Africa experiences a particular set of historical, economic, and social dynamics, the underlying reasons behind its protests are by no means unique.

Collusion between governments and big business is entrenching inequality.

The protesters who were shot at Marikana were employed to work for relatively meagre pay in potentially dangerous and stiflingly hot conditions for the well-resourced – and politically well-connected – British mining company, Lonmin.

They were being paid roughly $400 a month while Lonmin announced annual profits of $273m for its shareholders in 2011, the year before the massacre.

The CEO of Lonmin was paid roughly $1.8m a year.

Ultimately, it was the mineworkers’ demand for a pay rise that would allow them a better life and which would be commensurate with the company’s excellent profits that brought about their end.

The state should have been supporting them rather than attacking them.

The sad truth is that governments on many continents are succumbing to pressure from influential business entities.

In Peru, a company owned by the world’s 77th richest person pressured the government to deploy the army in order to protect the development of the Tia Maria copper mine.

Canada’s environmental activists opposing the activities of oil, natural gas, and other extractive industries have been dubbed as threats to “national security” by law enforcement agencies.

As the above examples show, the sad reality is that many governments around the world are abandoning democratic principles in order to secure their own power and the status of the wealthy and influential in society.

When citizens come out on to the streets to demand socioeconomic justice, they are being subjected to the harsh edge of the state apparatus, which often acts in the interests of a tiny minority.

The mineworkers who died at Marikana did not live to see their demands for fairer wages met.

But they did not have to die in vain if society can learn a valuable lesson from this most painful experience.

Whether we live in open or closed societies, Marikana should be a wake-up call for all of us who wish to see a better world.

It shows us that when governments and private businesses collude, democratic rights and constitutional principles can be reduced to mere words on paper.

Large scale citizen mobilisation against injustice is needed to wrest back control of the public sphere from a handful of interconnected elites and repair broken models of governance and politics.

Mandeep Tiwana is a lawyer specialising in human rights and civil society issues and the Head of Policy and Advocacy at The World Alliance for Citizen Participation (CIVICUS).

Cathal Gilbert is a researcher at CIVICUS. 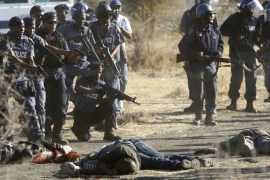 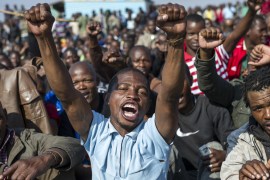 How the women of Marikana are taking on the World Bank

Residents of shantytowns around site of the 2012 massacre fight for ‘comfortably middle class’ lives they were promised. 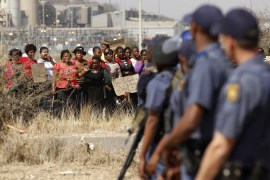 Filmmaker Rehad Desai speaks to Al Jazeera from Rustenburg, ahead of the second anniversary of Marikana.