Well maybe not welcome exactly. Things have changed for newcomers to Conservative Prime Minister Stephen Harper’s Canada. As a matter of fact, they’re now also different for “oldcomers” with dual citizenship – and even native-born Canadians who somehow managed to score dual citizenship through marriage or other means.

That’s because of a controversial provision of Bill C-24, laughably titled the “Strengthening Canadian Citizenship Act“, which passed on June 20, 2014. Under this particular section, which came into effect on May 29 this year, dual citizens and people who have immigrated here can be stripped of their Canadian citizenship if convicted of terrorism, treason, or spying offences.

But, considering the Harper government’s loose definition of terrorism, that one in five Canadians are foreign-born, and that about 250,000 new immigrants arrive on these shores every year, millions might be affected. What’s more, an estimated 150,000 Canadian-born citizens have dual status. Some people may be dual citizens and not even know it.

Citizenship and Immigration Minister Chris Alexander rationalised his new law by claiming that it’s to protect Canadians from what he describes as “jihadi terrorism” within our borders.

“Our Government’s changes to the Citizenship Act will ensure that those who wish to do us harm will not be able to exploit their Canadian citizenship to endanger Canadians or our free and democratic way of life,” he announced without noting the contradiction in his statement.

Typical talk from a government that, as civil liberties advocates and legal experts point out, increasingly conflates culture, religion and terrorism in order to justify racial profiling of Muslim Canadians.

In Amnesty International‘s view, “the proposed new revocation provisions are divisive and buy into and promote false and xenophobic narratives about ‘true’ Canadians and others, which equate foreignness with terrorism.”

Ironically, Harper, in what appeared to be the sudden realisation that Muslim Canadians can and do vote, last month, for the first time ever, hosted a photo op/Ramadan iftar.

“This event certainly came as a surprise to many given the government’s record of action that has alienated, marginalised, many Canadian Muslim communities,” Ihsaan Gardee, executive director of the National Council of Canadian Muslims, told iPolitics.ca.

It’s going to take a lot more than tea and tabouleh to persuade many Muslims here of that, especially seeing how the Harper government boasts of how it’s been triangulating “jihadi terrorists” with the passage of one law after another.

In 2015 alone, these have included the anti-democratic C-51, known as the “Anti-Terrorism Act”, which will likely never pass a constitutional challenge, the April budget, which diverted $293 million to intelligence and law enforcement, and, in May, the “Prevention of Terrorist Travel Act” and changes to the Canadian Passport Order to allow government to yank the passports of “those seeking to engage in terrorist activity abroad”. That despite how limiting mobility is unconstitutional under Canada’s Charter of Rights and Freedoms.

Ultimately, this legislation not only creates two classes of Canadians, it also removes the federal judicial system from the process of revoking citizenship.

Which is why, last week, groups like Amnesty International and the Canadian Civil Liberties Association took their concerns about these laws to the UN Human Rights Committee in Geneva.

“This is an important process for Canada to either demonstrate or explain on the world stage, and before an expert body, its record on human rights pursuant to the International Covenant on Civil and Political Rights,” said Sukanya Pillay, CCLA’s Executive Director and General Counsel. “We are there to ensure the body questioning Canada, the Human Rights Committee, knows of our many concerns regarding civil liberties in Canada, including Bill C-51, equality rights, aboriginal persons, police and conducted energy weapons, as well as the treatment of refugees.”

The kicker now is exiling those whom the government deems suspicious, or those who may be convicted of crimes in other countries, even those countries where democracy or due process is non-existent or a cruel joke, or where one may be convicted merely for blogging.

There has been no shortage of examples of hostile government treatment of Muslim-Canadian men, most notably child Guantanamo prisoner Omar Khadr.

Ultimately, this legislation not only creates two classes of Canadians, it also removes the federal judicial system from the process of revoking citizenship. Instead, decisions will be made at the ministerial level. This supposedly, at least in the view of the Harper government, will produce a more “streamlined citizenship revocation process” but, as the British Columbia Civil Liberties Association argues, cutting out the courts will end up being “unfair and likely unconstitutional”.

So unfair that, according to the Canadian Association of Refugee Lawyers (CARL), the act makes Canada an “outlier” among nations. For example, it has been unconstitutional for more than half a century in the US to revoke citizenship. Disowning citizens does not, as the government falsely asserts, bring Canada “in line with most of our peer countries”.

With the notable exception of the UK, and now with Australia introducing similar laws, the situation is in fact the opposite.

So yes, welcome to Canada.

Just don’t make yourself at home. 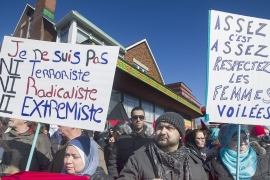 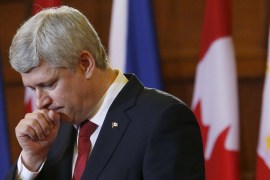 This may be the beginning of the end for Canada’s decade of conservative rule.