Pakistan will never be able to defeat the Pakistani Taliban and other terrorist outfits unless the all powerful army enlists the help of civil society and the public at large. A stunning example of what is possible and where the public now stands on critical social and political issues and on being able to discard their age-old prejudices was evident last week at the three-day Lahore Literary Festival.

For the first time – probably in the country’s history – a renowned Jewish writer and journalist spoke openly about his Jewish family’s tumultuous odyssey and litany of tragedies over the past century. I doubt if there was any young person in the audience who had ever seen, met or spoken to a Jew in their lives.

Yet, as the writer spoke, many in the audience were openly crying – even the women wearing hijab. Pakistan still bans all travel to Israel and prejudice against Jews has been fuelled by fundamentalist parties, extremist groups and the media.

Never before have an Afghan ambassador to Pakistan and an Afghan media mogul been welcomed in a public gathering with standing ovations every time either one of them spoke. For years there has been a high level of tension between the two countries. Pakistanis have been fed by successive governments and their military, that the Afghan government is nothing more than an ally of enemy India.

Now suddenly peace between Pakistan and Afghanistan is all that is being talked about and there is the suggestion that the militaries of the two countries will take a joint run against their common problem – the Afghan and Pakistani Taliban.

Neither have half a dozen serving and retired Pakistani generals dressed in suits, with their wives in tow, ever slipped into a public audience to hear India’s leading historians and other Indian intellectuals speak of India’s past and future problems and the need to make peace with Pakistan.

The army has fuelled public hatred for India since 1947, but even the army is now having to reassess the change in the public’s mood. Every time a speaker mentioned peace between the two countries, there was resounding clapping.

Nor have a Pakistani audience ever been regaled with the drawings of a brilliant and highly political American cartoonist who projected his work even as he spoke, even as it evoked the memories of the massacre at Charlie Hebdo, the French satirical magazine. Just a few weeks ago, Islamic fundamentalist clergy were encouraging large demonstrations in Pakistani cities against the magazine for publishing cartoons deemed blasphemous. Suddenly now, there was sympathy for those murdered cartoonists killed by extremists.

Over three days, the festival – the third in three years – drew over 70,000 people of all ages and all classes. There were over 75 sessions in English, Urdu, and two regional languages. Even though a few top novelists had dropped out, over 30 speakers had courageously travelled from abroad.

Pakistanis are now desperate for peace - with Afghanistan and India and with the world at large - and they want the army to act forcibly against terrorism.

Courage was in the air. Just four days before the festival began on February 20, there was an attack by a suicide bomber on a police station that killed five people and injured another 30. The attack took place just behind the festival venue.

A scared civilian government issued cancellation orders for the festival but in a surprise move, the army argued that the festival should carry on and that protection would be provided.

As the festival demonstrated, Pakistanis are now desperate for peace – with Afghanistan and India and with the world at large – and they want the army to act forcibly against terrorism. To its credit the army, too, is slowly changing and is now pursuing an across the board zero tolerance, counterterrorism strategy.

However, the army excludes political parties, civil society or the media from any discussion of its strategy and tactics. Local aid organisations are even banned from helping the 800,000 internally displaced persons that the war against the Taliban has unleashed in the northwest of the country.

The army wants to fight, look after refugees, and rebuild shattered cites. This will not work. What the festival demonstrated to the generals is that the battle against extremism cannot be won or even achieved without a more transparent strategy that involves civil society and the public.

Ahmed Rashid is the author of five books on Afghanistan, Pakistan and Central Asia. His latest book is ‘Pakistan on the Brink.’ He also heads the organising committee of the Lahore Literary Festival. 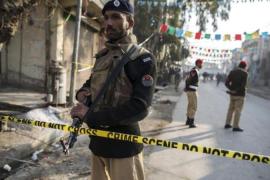 There are growing concerns that the country was fast moving toward a theocratic order.