“This man is an opportunity, sir. He is speaking about the timing … they are planning something there [in Libya]. Yes, he is speaking about a form of secret cooperation … unannounced to anyone … no one will hear or know about it … he will come to you,” said General Abbas Kamel, the chief aide of Abdel Fattah el-Sisi in the latest of a series of leaks.

“The man” was Ahmed Gaddaf al-Dam, Muammar Gaddafi’s cousin and chief aide, who was pursued by Libyan authorities after the revolution as well as by Interpol for alleged crimes against humanity. He was also recently interviewed on a local pro-authorities Egyptian TV channel to publicly declare his support for the Islamic State of Iraq and the Levant (ISIL).

The exact date of the leak is unknown. But it was certainly after Sisi’s military coup on July 3, 2013, and before Khalifa Haftar’s first “television coup” on February 14, 2014. The leak revealed no secrets; just further embarrassment. Sisi’s military involvement in Libya became common knowledge in official and expert circles around November 2013.

The favour of Egypt

In August 2014, US officials exposed secret Egyptian-Emirati air strikes in Tripoli, an unprecedented bombing raid by an Arab Gulf state on an Arab North African capital. More details were exposed recently, and they clearly violated the arms embargo on Libya, and the Security Council’s 1970 resolution.

“We should not forget the favour of Egypt. Our ammo came from Egypt – 400 containers from there,” said Saqr al-Joroushi, the commander of the air forces loyal to Haftar and the Tobruk government, in a YouTube video, while the cheering crowd chanted “Allah akbar”.

In February 2014, Sisi’s air force struck again. This time in Derna after a horrific ending of the hostage crisis in Sirte, in which ISIL militants brutally slaughtered 21 Egyptian citizens. After the strike, the regime sought United Nations approval for a military intervention, then for a naval blockade of the Tripoli government, while lifting the embargo on the other side of the civil war. All attempts were diplomatic failures.

Domestically, the air strikes were popular among regime supporters. But the hysteria promoted by the local media and the Egyptian regime’s hyper-nationalist propaganda diverted the public from asking important questions. For example, having intelligence and security presence in Libya and local allies, what was the regime doing for 50 days since the hostages were kidnapped?

Historically, Egypt has had a dismal record in hostage situations. Unfortunately, the February crisis has been the norm, rather than the exception. Failures in negotiating the safe release of hostages have started from the 1970s, with its bloodiest result in 1985.

The hysteria promoted by the local media and the regime's hyper-nationalist propaganda diverted the public from asking important questions.

Back then, an Egypt airplane was hijacked by Abu Nidal’s organisation and the tragic episode ended in the death of 60 hostages mainly by Egyptian Special Forces, after they stormed the airplane in an attempt to get to the three hijackers. No public revisions were done to the scorched-earth approach; an approach that the institutional culture within the military and security establishments sustain to this day.

“Prestige” of the state and its armed institutions are assigned high value, whereas lower values are assigned to civilian lives within that culture. This is especially the case when the hostages come from impoverished social backgrounds, marginalised regions, and religious minorities.

“Sisi doesn’t have credibility with, and he is in fact an opponent of, the moderate Islamists and they are already looking to use his bombings as a pretence to abandon the talks,” a European diplomat told the Wall Street Journal on Thursday. That may be an oversimplification on several levels. Whereas they are part of it, the Tripoli government is not exactly run by “moderate Islamists” but by a multilayered coalition in which pro-revolution regionalists are a very influential faction.

The Tobruk government is not exactly “secular” either. It is also composed of a non-homogeneous coalition of military factions, regionalist forces, pro-Gaddafi elements, and pro-revolution ones; with the military faction – led by Haftar – having more clout. The latter believes in the “Sisi model” of takeover, including using Salafi figures to issue supportive fatwas for repressing rivals.

The western-backed UN strategy has an alternative route – with less bloody prospects and a potentially higher chance of defeating ISIL and like-minded organisations without empowering a ruthless dictator in the process. The immediate objective of the strategy is to build a unity government and Libya’s security and military forces.

But the situation in Sirte needs a quick response. Libya Dawn, a military force operating under Libya’s chief of staff loyal to the Tripoli government has deployed the 166th Battalion around Sirte, in an attempt to take over the city centre, the university, and other areas from ISIL loyalists.

“ISIL forces there are estimated to be somewhere between 100-150 armed vehicles [pick-up trucks and four-by-four SUVs],” said Mohammed Abdullah, a General National Congress (Tripoli government) member and the leader of the National Front Party. The ground troops of Libya Dawn are not enough for a quick, decisive victory though.

“The force is composed of around 300 armed vehicles,” said Abdullah.

Regardless of how the confrontation between the Tripoli government and ISIL goes, the strategy preferred by the Sisi regime can have disastrous consequences on Libya’s already precarious situation, not to mention the rest of the region.

The objective of that strategy is not about national reconciliation, social cohesion, democratisation, military and security professionalism, and democratic control of armed actors. It is more about eradication of political rivals, empowering like-minded/loyal military generals, and installing another repressive authoritarian regime on the borders of Egypt, and – where most of the other sides intersect – defeating ISIL.

But the tactics employed to attain that last objective are more likely to prolong the civil war in Libya and destroy any potential for reconciliation. And with these consequences, a stronger North African version of ISIL is a more likely outcome.

Dr Omar Ashour is a senior lecturer in security studies at the University of Exeter. 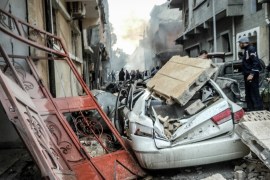