Fourteen killed, and tens more injured. At approximately 11am on Wednesday morning, several gunmen opened fire inside the Inland Regional Center in San Bernardino, California. The facility, which houses patients with disabilities, seemed an unlikely target for domestic terrorists.

Yet the carnage that ensued makes it the biggest mass shooting since the Sandy Hook tragedy of December 2012, when 26 people, including 20 young students, were killed.

Only five days after the attack on the Planned Parenthood facility in Colorado Springs, the San Bernardino attack again raises questions about the racial contours and ideological colours of domestic terrorism.

For decades in the United States, domestic terrorism has been defined almost exclusively along racial and religious lines. The legal term, which ties violent acts to political ideology, is consistently supplanted by the political construction of terrorism – reserved overwhelmingly for incidents involving Muslim culprits.

While popular attention turns to the racial and religious identities of the San Bernardino shooters, history reveals that this means very little to the likely political response.

White men have committed the vast majority of mass attacks on US soil spanning the two decades between San Bernardino and the Oklahoma City bombings in 1995. But the political and legislative response has disproportionately focused on Muslim communities.

However, the anti-terrorism legislation enacted in its immediate wake disparately targeted Arab and Muslim Americans, deviating entirely from the reality that Arabs or Muslims had nothing to do with the attack that claimed the lives of 168 people. The legal response was driven by stereotype, instead of facts on the ground.

Also read: US gun culture: What will it take to change?

Little has changed in the past two decades. The emergence of counter-radicalisation policing on the domestic front – which seeks to combat terrorism by preventing “radicalisation” – focuses almost entirely on Muslim American communities.

While 63 percent of mass shooters since 1982 have been white men, counterterrorism dollars and strategy in the US still fixate on a looming Muslim “threat” that seldom strikes.

This neglect facilitates the unchecked growth of homegrown white terror, and enables racially and religiously motivated dragnets that erode the civil liberties of Muslim citizens associated with a terror that looms far more heavily in the US imagination than it does in real life.

The media discourse around terrorism has noticed modest progress. It is becoming more frequent for the US media outlets to label mass killings not involving a Muslim culprit as acts of domestic terrorism.

For instance, a large number of media outlets branded Dylann Roof a domestic terrorist. His execution of nine churchgoers in South Carolina in June 2015 was driven by anti-black racism and white supremacy, aligning with the legal elements of terrorism.

However, the Department of Justice decided against charging him with terrorism. Dylann’s whiteness cleared him of a terrorism charge, in the same way that a Muslim’s religion immediately presumes terrorism.

Therefore, even though media discourse regarding the framing of terrorism may be shifting towards the positive, counterterror measures and prosecutions remain fixed.

The government’s response to domestic terror attacks, mass shootings, and even foreign tragedies – such as the Paris attacks – will disproportionately punish Muslim-American communities, and bolster anti-terror and counter-radicalisation programmes that conflate Islam with threat. Even if statistics argue otherwise or even when the frequency of white male-led terror attacks urge differently.

The government’s counterterror arms will be extended deep into Muslim-American communities; regardless of whether one or all of the San Bernardino shooters are Arab or Muslim, white or Christian, citizens or non-citizens. History, time and again, reveals that the identity of the shooter matters little to the sweeping dragnet that follows.

Whether named Dylann or Timothy, or Mohamed or Syed, the state scrutiny will fall squarely on the shoulders of the US’ eight million Muslims. 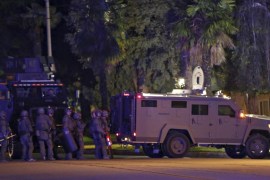 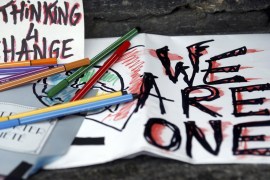