If you find yourself wondering how it was you missed the whole 4th season of Walker, Texas Ranger, while forcing yourself to attend Lamaze classes with your significant other. If on cool, crisp days the aforementioned tragedy causes you to wistfully wonder how to fill the emptiness inside – let me introduce you to the Rick Perry for President Campaign.

Perry, who has seemingly been Governor of Texas since around the time when remaining at The Alamo began to look like a questionable career move, is now ready to throw his 10-gallon hat, frothy intellect and custom-made cowboy boots into the national political ring.

Does anyone else see the problem with this line of reasoning? Shhh, don’t tell anyone, but Reagan and Bush The Younger served as president for roughly 50 per cent of the past 30 years.

Of course Perry can win, and in fact, if the Obama team keeps thinking that “patent reform” is the new WPA and continues to show that fighting Dukakis spirit, I’d go so far as to give Perry the advantage should he secure the GOP nomination.

Should he be president of anything of more consequence than a glee club? Of course not.

He’s made it clear in speeches and his recently released macho-man web advert that he’ll do for America what he did for Texas – which probably involves shooting cheetahs recreationally with hollow-tipped bullets and creating benefit-rich employment opportunities for Americans, such as scraping toilets and salting freedom fries.

That’s right, the much-vaunted “Texas Miracle” is as fake as Perry, built on the premise that working three minimum wage jobs and going without healthcare (Texas leads the nation in percentage of overall residents and children without healthcare) is some kind of economic Eden, as opposed to say an economic Elba Island.

Perry, meanwhile, is a “cowboy” who wears Armani suits and French cuffs (seriously, French cuffs?). Attacks stimulus spending while taking a heaped helping of it to bail himself out. Uses taxpayer money to enrich his corporate-lobbyist friends – and endangers the United States of America by inviting a Chinese telecom company into Texas that George W Bush’s national security team warned him would pose a cyber-security threat to our military – after talking tough on the Chinese in his children’s book: Fed Up.

In other words, he’s a fraud

But will Democrats, and the Obama campaign, specifically, tell that story? Or will they give his myriad character deficiencies a pass, as Obama already did when Perry entered the race by questioning Obama’s love of country, and Obama responded with something along the lines of “he’s new to this, give him some time”.

It reminds me of 2008, long before the economic crash and Obama’s election became a foregone conclusion. Back then, when the race was neck-and-neck, John McCain attacked Obama’s patriotism by saying things like Obama “would rather lose a war in order to win a political campaign” and his Russia-gazing, vice-presidential nominee, Sarah Palin, offered that he was “palling around with terrorists”. The Obama response was to laugh off these attacks or offer some variation of how McCain was a war hero who was “borrowing bad ideas from George W Bush.”

It isn’t just Obama, though, even though he’s turned this into an art form. This is how Democrats have been running campaigns for a long time now. Republicans go straight for the character of the Democrat, realising that if they destroy the messenger, it won’t matter much what the Democrat says. Democrats are called liars, flip-floppers, and variations on treasonous – and respond by telling people their Republican opponent has a healthcare plan that only cuts costs by one per cent, not the two per cent they’re promising.

What is so strange about this is that trial lawyers, who make a living by “impeaching the credibility of witnesses”, and Hollywood producers, who earn their paycheques by reaching us emotionally, are both pretty solid Democratic constituencies. Yet, their know-how hasn’t seemed to penetrate much of the Democratic consultant class.

Rick Perry is dangerous. He is a dominionist, meaning the Biblical Law, to him, supersedes that of the US Constitution. He possesses slightly less gravitas than a half-eaten bowl of chili. The amount of hairspray he uses might actually be a threat to national security. And as conservative intellectual Bruce Bartlett put it, he’s kind of an “idiot”.

Perry’s also already shown his willingness to do anything to win, no matter how potentially damaging to the US and its economy – starting his campaign with an attack on the patriotism of Federal Reserve Chairman Ben Bernanke (specifically intended to hamstring his economic response to this crisis), who you may remember was originally put in that job by none other then George W Bush.

So call Perry dumb, make jokes about a guy who found a way to get a C in college gym, which presumably included trying to eat the eye-black and steal bases by actually, you know, stealing the bases.

Make fun of him, because it’s enjoyable!

But don’t for a second think this is the way to beat him in a race for the presidency. The way to do that is to tell the truth about him. That he’s as fake as a three-dollar bill, all hat and no cattle, or to put it in a language Perry can understand – he’s Blazing Saddles, not The Unforgiven. 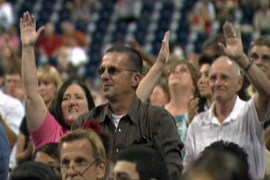 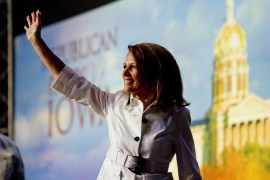 Congresswoman wins 28.5 per cent of the votes in early test for Republican contenders’ campaign for the White House. 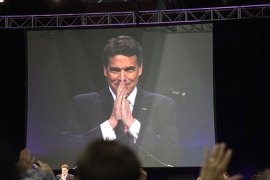 Conservative Texas governor declares himself a candidate for US president to face Democratic Barack Obama. 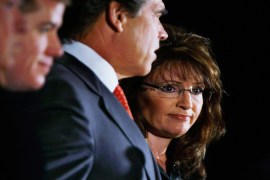 A fast growing right-wing politico-religious presence plans to implement an end-times, Christian theocracy in the US.