If Cowboys and Aliens – the hilarious summer blockbuster featuring Daniel “007” Craig and Harrison “Indiana Jones” Ford – were to be set in Xinjiang, China’s Far West, the cowboys would be ethnic Uyghurs and the aliens, the Han Chinese People’s Liberation Army (PLA). Of course this is no summer fun – rather an explosive, decades-long tragedy.

Chinese media, following the official spin by the government of Kashgar City, has blamed a group of “religious extremists” led by “militants trained in overseas terrorist camps” for last weekend’s latest conflagration in Xinjiang, which left six dead and 15 wounded.

The “terrorist group” is the East Turkestan Islamic Movement (ETIM), which emerged in the mid-1980s, widely considered in China as the most dangerous of the East Turkestan “separatist” groups. The official story is that militants “set fire to a restaurant” and then, wielding sickles and knives, started “killing civilians at random”.

Geopolitical ramifications may be dire. As ETIM is based in the porous AfPak tribal areas, this amounts to China directly accusing Pakistan of harboring them. Beijing, as well as the UN, consider ETIM to be a terrorist organisation. Yet as the tribal areas largely escape Islamabad’s rule, even the ISI is not keeping tabs on how many Uyghurs are embedded in Pakistani Taliban and al-Qaeda networks.

What’s raising eyebrows is that Beijing, which Pakistani Prime Minister Yousef Gillani describes as “Pakistan’s best friend” and is unanimously viewed by the Islamabad establishment as an “all-weather friend”, has condoned the Kashgar City accusation only one day after ISI chief Lt. Gen. Ahmed Shuja Pasha was in China discussing exactly the Uyghur situation.

Moreover, China now joins India and Afghanistan in forcefully protesting against hardcore separatist or jihadist outfits based in Pakistan. The last thing embattled Islamabad needs at the moment is Beijing suspecting that it harbors and protects “terrorists”.

The response in Xinjiang was harsh but subdued. Two Uyghur suspects were swiftly killed by local police outside Kashgar while the PLA blanketed the city centre with paramilitary units and anti-riot vehicles – especially in sensitive People’s Square, with its trademark giant statue of Mao Zedong.

On the other side of the spectrum, star exile Rebiah Kadeer, president of the Washington-based World Uyghur Congress (and regarded as the plague in Beijing) said in an emailed statement that she could not blame Uyghurs “who carry out such attacks for they have been pushed to despair by Chinese policies”.

Uyghurs have become a minority in Xinjiang – around 41 per cent and declining, due to the relentless influx of Han Chinese – but make up the majority in Kashgar.

After the opening of the Karakoram Highway between China and Pakistan, up to the mid-1990s thousands of young Uyghurs studied Islam abroad, going to religious schools in Pakistan, Egypt, Turkey and Saudi Arabia. A few also went to Yemen and Qatar.

The problem, China would argue, is that those who returned to Xinjiang were in most cases Deobandis, Salafis and Wahhabis. Over the past few years Uyghurs returning from Central Asia also opened Hizb-ut Tahrir cells in Xinjiang. Hizb-ut Tahrir is extremely critical of Beijing’s policies.

So the infernal mechanism of the Urumqi riots in July 2009 that killed nearly 200 people seems to be back in business.

Even if what happened in Kashgar is far from being meaningless violence by a bunch of savage Uyghurs, or a foreign conspiracy to undermine Chinese sovereignty and its now non-stop road to prosperity, what’s worrying is that this is not the official spin only; the narrative is shared by an overwhelming majority of Chinese public opinion.

As much as there is a Red Guard revival going on in China – a feverishly patriotic neo-Cultural Revolution in which Twitter and Facebook-style groups have replaced Mao’s Little Red Book – Chinese intellectuals overwhelmingly criticise Beijing for being too “soft” on its ethnic minorities, demanding it must crack down harder against Uyghurs and Tibetans.

Oil and gas-rich Xinjiang consists of 1.6mn square kilometres, vast deserts, and borders no less than 8 Asian countries. Xinjiang is much more than China’s “frontline against terrorism”. It is also at the core of China’s dream of being the star of the New Silk Road.

Even US Secretary of State Hillary Clinton, in her recent trip to Chennai in India, fell under the spell. “Let’s work together to create a new Silk Road”, she said, identifying “an international web and network of economic and transit connections”.

The US State Department, the Pentagon and Washington think tanks have all caught Silk Road fever. Ambitious New Silk Road strategies are being churned out, all trying to deconstruct a myriad of historical, social, cultural and economic factors that may coalesce in the resurgence of New Silk Roads.

The roads, of course, are ultimately about trade – from China, through the Central Asian “stans” and the Caucasus, across Eurasia towards Europe.

The historic Silk Road – actually, a maze of interconnected roads – once spanned South, Central, and East Asia and a great deal of the Middle East.

But a full 21st-century revival of the Silk Road would imply, at a minimum (and that’s a very short list):

China should not underestimate Central Asia’s ethnic solidarity with the Uyghurs.

On a parallel track, there are enlightening similarities on how Beijing treats resource-rich Xinjiang and how Islamabad treats resource-rich Balochistan. A great deal of Balochis, angered by decades of discrimination and exploitation by the central government, have as much of a separatist fire in their bellies as Uyghurs.

Then there’s the specter of the Arab Spring. Chinese think tanks have been working overtime churning out extremely detailed reports for the collective leadership on how China should respond to the MENA (Middle East-Northern Africa) democratisation drive.

Hosni Mubarak’s trial in Egypt may have ruffled a few feathers in Beijing. But the fact that the House of Saud basically deployed a ruthless region-wide counter-revolution strategy may have served to silence Chinese fears (this is not unrelated to the simple fact that Saudi Arabia is a key oil supplier to China).

The burning question is what will it take for Beijing to fine-tune its modernisation model as applied to Xinjiang – finally grasping the cumulative root causes of Uyghur frustration and anger.

Beijing essentially sees it as a war, as most of the Israeli establishment regards the Palestinian “problem”.  Significantly, al-Qaeda also sees it as war; it has identified China as an enemy and has called for Uyghurs to engage in a holy war against the Chinese government in Xinjiang.

Yet an ethnic abyss and hunger for blood are counter-productive – and bad for business. The problem is of course immense; Uyghurs don’t feel a shared history with China, and, moved by the memory of ancient powerful empires – which at times were rivals of China – and a recent, botched independence stretch with the Republic of East Turkestan, they don’t see integration as a historical inevitability.

But real political autonomy for Uyghurs, with better socio-professional prospects, would do wonders for China’s Silk Road interests with key players such as Iran, Saudi Arabia and Turkey, and would be a small price to pay for China to fully profit from the benefits of the New Silk Road.

Pepe Escobar is the roving correspondent for the Asia Times. His latest book is Obama Does Globalistan (Nimble Books, 2009). He may be reached at pepeasia@yahoo.com. 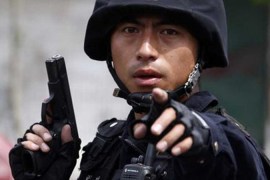 Police say 14 “rioters” are among 18 people killed in clash at police station in ethnically tense region of Xinjiang. 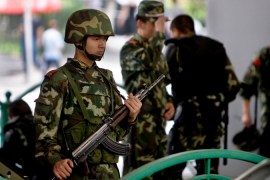 ‘Eruption of violence’ in China’s Xinjiang

‘Extremists’ blamed for attacks in China

Government says the group it holds responsible for deaths of 11 civilians in Xinjiang, had trained in camp in Pakistan.