Police in Canada are still searching for one of the two men identified as suspects in a stabbing spree in the central province of Saskatchewan that left at least 10 people dead.

The second suspect has been found dead, Royal Canadian Mounted Police (RCMP) said during a news conference on Monday evening.

Another 18 people were wounded in the attacks on Sunday in the remote Indigenous community of James Smith Cree Nation and the nearby town of Weldon.

“It is horrific what has occurred in our province today,” RCMP Assistant Commissioner Rhonda Blackmore told a news conference on Sunday.

What happened during the attack?

Who are the suspects?

Have the suspects been charged?

What do we know about the victims?

Lana Head has been identified as one of the people who was fatally stabbed Sunday on James Smith Cree Nation in Saskatchewan.https://t.co/bhpw8DE2hz

Where did the attacks happen? 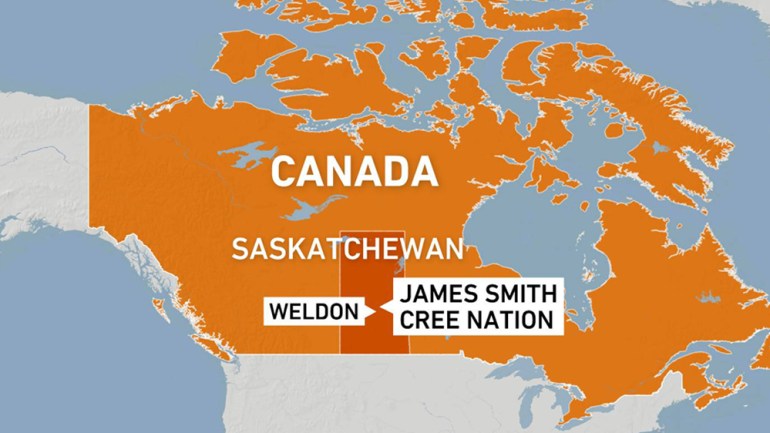 Are mass attacks common in Canada?

Today and tomorrow, the flag on the Peace Tower will be flown at half-mast – in memory of those who lost their lives during yesterday’s attacks in Saskatchewan, and in solidarity with everyone affected by this violence. All Canadians are there for you.