A gunman has opened fire in a school in central Russia, killing at least 17 people and wounding 24 others before shooting himself dead, authorities said.

The shooting took place on Monday in School No 88 in Izhevsk, a city 960km (600 miles) east of Moscow in the Udmurtia region.

Russia’s Investigative Committee identified the gunman as 34-year-old Artyom Kazantsev, a graduate of the same school, and said he was wearing a black T-shirt bearing “Nazi symbols”. No details about his motives have been released.

The governor of Udmurtia, Alexander Brechalov, said the gunman, who he said was registered as a patient at a psychiatric facility, killed himself after the attack.

“President Putin deeply mourns the deaths of people, children, at a school where there was a terrorist attack by a person, who apparently belongs to a neo-fascist group,” Kremlin spokesman Dmitry Peskov told reporters.

“The president wishes for the recovery of those injured as a result of this inhuman terrorist attack,” Peskov added. 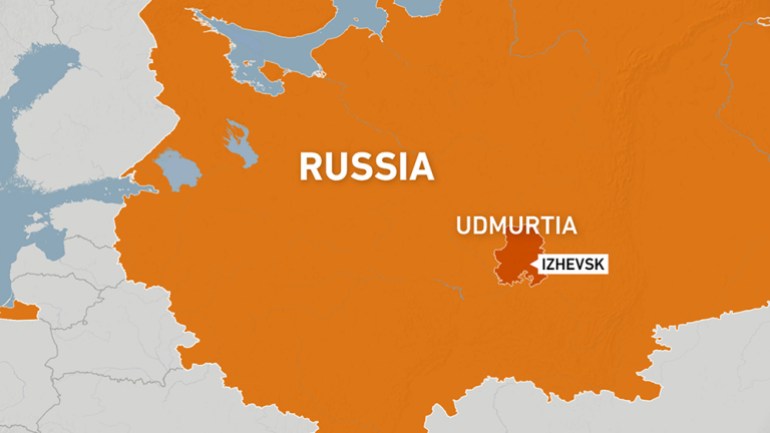 Russia’s National Guard said Kazantsev used two non-lethal handguns adapted to fire real bullets. The guns were not registered with the authorities. A criminal investigation into the incident has been launched on charges of multiple murders and illegal possession of firearms.

The school, which teaches children aged six to 17, was evacuated and the area around it was cordoned off.

Izhevsk is a city of about 640,000 people located west of the Ural Mountains in central Russia.

The attack comes at a critical time for Russia, which is waging a deadly war in Ukraine and has recently announced a partial mobilisation order to boost its forces.

Hours before the school shooting, a man opened fire and wounded a military recruitment officer at an enlistment centre in Siberia.

“Any shooting at a school is a cause for deep concern for authorities, families and the nation in general. We have seen that in the United States and many other countries,” said Al Jazeera’s Mohamed Vall, reporting from Moscow.

“But Russians are saying this is not a frequent occurrence in Russia – and most of the time it is difficult to establish the motives behind it.”

The last such tragedy took place in April 2022, when a man killed two children and a teacher at a kindergarten in the central Ulyanovsk region before killing himself.

In May 2021, nine people – including seven children – were killed after a lone teenage gunman opened fire in Russia’s southwestern city of Kazan.

In 2018, a student at a college in Russian-annexed Crimea killed 20 people before turning his gun on himself.

Other high-profile shooting cases have taken place in Russia’s army, putting the issue of hazing in the spotlight in the country where military service is compulsory for men aged between 18 and 27.

In November 2020, a 20-year-old soldier killed three fellow servicemen at a military base near the city of Voronezh. In a similar attack in 2019, a young recruit shot dead eight servicemen, saying he faced bullying and harassment in the army.