Rustam lives several hundred metres away from a swamp that teems with wild ducks every summer.

His home is in Kaliningrad, Russia’s westernmost Baltic enclave, a hunter’s paradise brimming with game.

Deer, roe and wild boar spill from the national reserves in neighbouring Lithuania and Poland to roam the nascent forests that replace forlorn farmland throughout the region.

Rustam has for years tried to get a permit for a hunting firearm.

But he first needs to go on a training course on handling guns, learn first aid, undergo psychiatric and optometric evaluations, take a drug test and get a hunting licence.

Those wishing to buy a gun also need permits from police, documented proof of no criminal record and certified safes for keeping the weapons at home.

So, instead, he bought a pump-action gun – for which he needed far fewer documents and less time.

He hunts near his house once a week, often to shoot down a couple of ducks for lunch.

“We stopped buying meat, got a freezer … of game,” Rustam told Al Jazeera.

He withheld his last name because he is a government employee.

His gun is a pricier version of the Hatsan Escort shotgun 19-year-old college dropout Ilnaz Galyaviyev used on May 11, to shoot dead seven children and two teachers in his former school in Kazan, the capital of Tatarstan.

The incident shocked the world; school shootings are relatively new and rare in Russia.

So, many Russians ask themselves and the authorities – how did a mentally troubled teenager get hold of a weapon and walk into a school almost unimpeded? 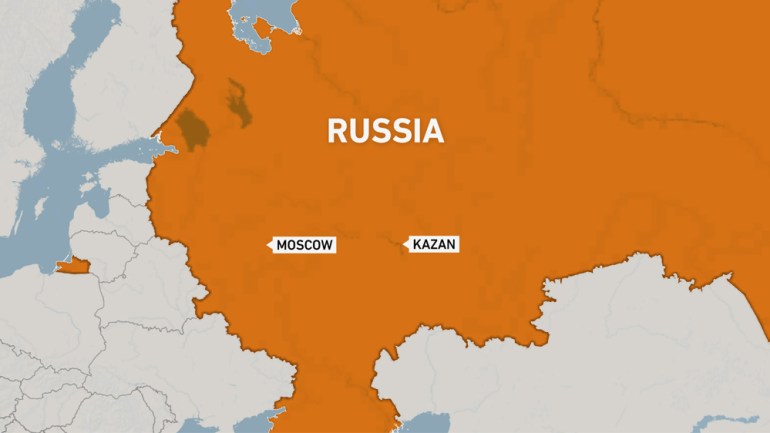 A mediocre student and a taciturn recluse, Ilnaz Galyaviyev was diagnosed with “brain atrophy”, a condition that kills brain cells and causes cognitive dysfunction, last year, the Kommersant daily reported after the shooting.

But the diagnosis did not surface in mid-April, when he took a day-long training course on arms handling, obtained a permit and bought the gun.

Days earlier, he quit college and declared on social media that he was “God”.

“I will kill lots of biological garbage and shoot myself,” he wrote on his Telegram channel, minutes before leaving his apartment, where he lived alone after falling out with his parents.

Wearing black clothes, sporting a scarf with a handmade sign reading “God” and brandishing the gun, he walked the 300 metres to School 175 – and even said hello to a couple of acquaintances on the way.

No one stopped him or called the police.

But the elderly, unarmed school guard he wounded pushed the alarm button.

After his arrest, Galyaviyev grinned and grimaced condescendingly in a court building, but admitted his guilt.

Another version of the Turkish-made Hatsan Escort pump-action gun was used in Russia’s deadliest school shooting which saw an 18-year-old college student kill 20, including himself, and wound 67 in the town of Kerch in annexed Crimea in 2018.

Both shooters used makeshift explosives and modelled their shooting sprees on the 1999 school massacre in Columbine, Colorado, when two students killed 13 people, tried to blow up an explosive and killed themselves.

Unlike the United States, where mass shootings have become almost daily events, shooting sprees are relatively rare and new in Russia.

There are almost 400 million firearms in civilian hands in the US.

By comparison, about four million out of Russia’s population of 143 million own some 6.6 million weapons, mostly hunting rifles, according to Russia’s National Guard.

For some Indigenous groups and villagers in the Siberian and Arctic regions of Russia, home of the world’s largest boreal forest, hunting is a way of life and a major source of protein.

For many others, mostly affluent men, it is a pricey and increasingly popular pastime.

Russian politicians and businessmen sneak out to the great outdoors to kill a deer or two – and make deals.

Shops catering to hunters have mushroomed throughout Russia.

But the booming market and a level of corruption make guns increasingly available.

The Kremlin had admitted that the registration process is flawed.

“The thing is that firearms, which are used as assault rifles and similar weapons in certain countries, are sometimes registered as hunting guns,” the Kremlin’s main spokesman Dmitry Peskov said after the latest shooting, adding that the authorities will “consider the issue.”

The Kremlin made similar pledges after the 2018 Kerch shooting – but gun laws have not been changed.

Some in Kazan see the school massacre as a reflection of how law enforcement agencies are more preoccupied with squashing dissent than with identifying potential criminals.

“I perceive it as yet another horrible symptom of the dire condition the Russian society is in. It’s nothing like rounding up harmless young supporters of [jailed opposition leader Alexey] Navalny, one has to really work here,” a Kazan resident, who only identified himself as Iskander, told Al Jazeera.

Meanwhile, police in Kazan have been accused of cruelty and incompetence.

A suspected petty thief bled to death in a Kazan hospital in 2012, after police tortured and raped him with a bottle.

Nine officers were fired, and their entire department was closed after protests.

“Unfortunately, there is nothing unexpected in the failure of our [law enforcement] agencies. The boys have neither time nor professionalism to prevent real, not fake threats,” Iskander said.

Some psychologists have pinned the blame on the Kremlin’s glorification of Russia’s military glory.

“If this is a search for a culprit – the entire [government] system is to blame. And its masculinisation and sabre rattling. And the lure of vigilantes to the youngsters,” a renowned Moscow psychologist told Al Jazeera on condition of anonymity.

Failings in the education system?

And then, there are concerns over Russia’s school system.

Low-paid and overworked teachers turn a blind eye to bullying in classes and on their students’ problems at home.

Domestic violence, like in many other countries, has also skyrocketed during the continuing pandemic.

“It is not the weapons that provoke shootings or stabbings in schools, but the atmosphere of total psychological and often physical violence in schools and in Russian families,” Pavel Luzin, an analyst with the Jamestown Foundation, a think-tank in Washington, DC, told Al Jazeera.

In the early 2010s, he worked as a history and natural science teacher in a school in the Ural Mountains city of Perm.

In 2018, two teenagers armed with knives attacked and wounded 15 people in the school.

“In almost every school, [violence] is brewing, there are occasional suicides, the bullying of students that is often inspired and supported by teachers, and if it is not supported – it is not prevented,” he said.