The suspected killer of Japan’s former Prime Minister Shinzo Abe admitted targeting the politician and said he held a grudge against an organisation he believed Abe was connected to, police have said.

Senior police officers in the western region of Nara, where the murder took place, named the suspect on Friday as unemployed 41-year-old Tetsuya Yamagami, who said he had used a handmade gun.

“That’s the suspect’s assertion, and we have determined that [the gun] is clearly handmade in appearance, although our analysis is currently ongoing,” an officer told reporters.

Police said it was not clear if the “particular organisation” mentioned by the suspect actually existed, adding that investigations were continuing, but several Japanese media outlets described the organisation as a religious group.

Yamagami was pictured at the scene holding a large boxy black object that appeared to have two barrels. 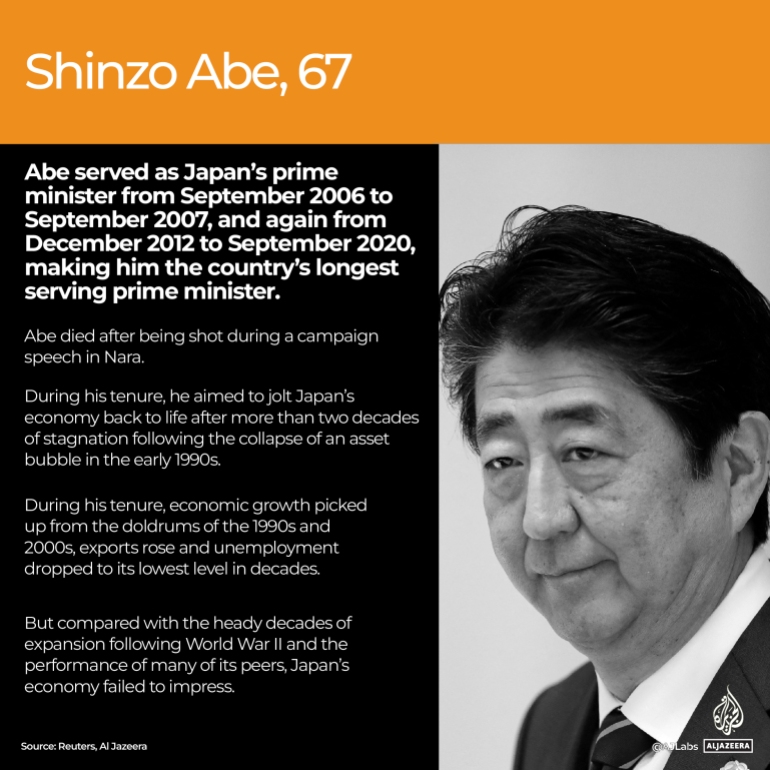 The suspect, who addressed police in a “matter-of-fact way”, told officers he had worked for the Maritime Self-Defense Force – Japan’s navy – for three years from 2002, but those claims were also under investigation. Yamagami also told police he had learned about Abe’s visit online, the officers said.

They added that they were probing whether there were any problems with security at the campaign event where the assassination took place on Friday morning.

“We will take appropriate measures if problems were discovered.”

The police said they were investigating whether he had acted alone.

‘A loud bang and then smoke’

Abe, the longest-serving leader of modern Japan, was gunned down on Friday while campaigning for a parliamentary election, shocking a country where guns are tightly controlled and political violence almost unthinkable.

Abe, 67, was pronounced dead around five and a half hours after the shooting in the city of Nara.

Abe had been making a campaign speech outside a train station when two shots rang out.

Security officials were then seen tackling a man in a grey T-shirt and beige trousers.

“There was a loud bang and then smoke,” businessman Makoto Ichikawa, who was at the scene, told Reuters.

“The first shot, no one knew what was going on, but after the second shot, what looked like special police tackled him.”

Video shows the moment former Japanese PM Shinzo Abe was shot from behind as he campaigned in the city of Nara. Abe was rushed to the hospital in critical condition.

Kyodo news service published a photograph of Abe lying face-up on the street by a guardrail, blood on his white shirt.

People were crowded around him, one administering heart massage.

Abe was taken to hospital in cardiopulmonary arrest and showing no vital signs. He was declared dead at 5:03pm local time (08:03 GMT), having bled to death from deep wounds to the heart and the right side of his neck.

He had received more than 100 units of blood in transfusions over four hours, Hidetada Fukushima, the professor in charge of emergency medicine at Nara Medical University Hospital, told a televised news conference.

Members of the public laid flowers near the spot where Abe fell. TV Asahi reported that Abe’s body would be transferred to his Tokyo home on Saturday.

“I am stunned, outraged, and deeply saddened by the news that my friend Abe Shinzo, former Prime Minister of Japan, was shot and killed while campaigning,” US President Joe Biden said in a statement.

“This is a tragedy for Japan and for all who knew him … He was a champion of the alliance between our nations and the friendship between our people.”

The United States is Japan’s most important ally. Similar messages of sympathy and shock poured in from around the world following news of Abe’s death, including from neighbouring Taiwan, China and Russia, as well as from across Asia, Europe and the United States.

It was the first killing of a sitting or former Japanese leader since a 1936 coup attempt, when several figures including two ex-premiers were assassinated.

Post-war Japan has prided itself on its orderly and open democracy. Senior Japanese politicians are accompanied by armed security agents but often get close to the public, especially during political campaigns when they make roadside speeches and shake hands with passers-by.

Abe served two terms as prime minister, stepping down in 2020 citing ill health. But he remained a dominant presence over the ruling Liberal Democratic Party (LDP), controlling one of its major factions.

Prime Minister Fumio Kishida, who won the prime ministership with Abe’s backing, said the LDP would continue election campaigning on Saturday to demonstrate its resolve to “never give in to violence”, and to defend a “free and fair election at all cost”. 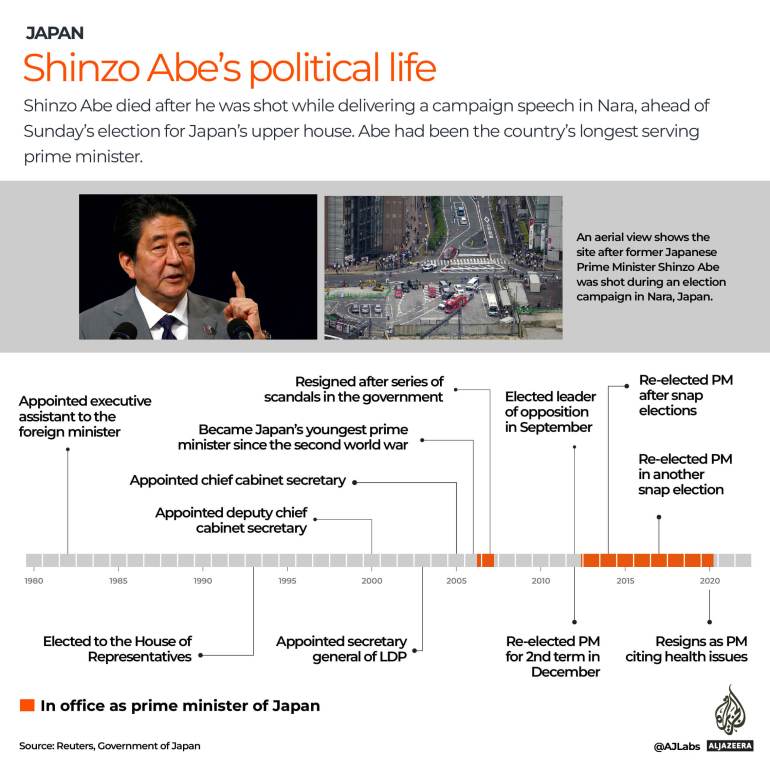