Former British Prime Minister John Major has added his voice to calls for Boris Johnson to be replaced immediately, rather than be allowed to remain as a caretaker leader, saying that Johnson’s cabinet may struggle to “restrain him”.

Major said on Thursday it was “unwise, and may be unsustainable” for Johnson to remain in power for several months.

That call was echoed by several Conservative members of parliament who said Johnson’s behaviour in refusing to resign earlier this week means he should be forced out before the leadership contest, a process that could take months.

“The proposal for the prime minister to remain in office – for up to three months – having lost the support of his cabinet, his government and his parliamentary party is unwise, and may be unsustainable,” Major said in a letter.

“Some will argue that his new cabinet will restrain him. I merely note that his previous cabinet did not – or could not – do so,” he said.

Johnson announced on Thursday his resignation as the United Kingdom’s prime minister after he was deserted by cabinet ministers and many Conservative Party lawmakers who said he was no longer fit to govern. But he has defied pressure to step down immediately, insisting he planned to stay on as prime minister while his party picks his successor.

In his resignation speech at the door of Number 10 Downing Street, Johnson thanked his voters: “Thank you for that incredible mandate, the biggest Conservative majority since 1987, the biggest share of the vote since 1979.”

“And the reason I have fought so hard in the last few days to continue to deliver that mandate in person was not just because I wanted to do so, but because I felt it was my job, my duty, my obligation to you to continue to do what we promised in 2019.”

Simon Hoare, a Conservative member of parliament, said Johnson’s behaviour meant he had forfeited the right to remain as a caretaker leader. 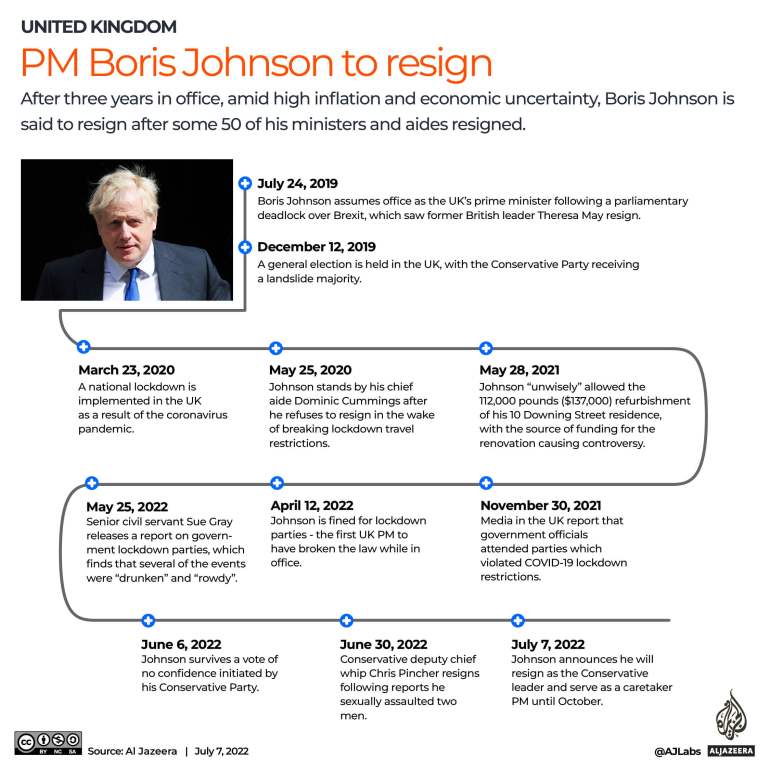 Another Conservative lawmaker said: “We need to be rid of Boris as soon as possible. He’s too toxic.”

Chris Bryant, a member of parliament for the opposition Labour Party, said Britain needed an established government to deal with the twin challenges of a cost-of-living crisis and the war in Ukraine.

The prime minister’s decision to quit marks the end of a roller-coaster political career in which he led Britain out of the European Union and took his Conservative Party to the largest election victory in three decades.

It also follows three years of scandals, including anger over parties held at Johnson’s Downing Street office during the coronavirus pandemic that broke lockdown rules and accusations of breaking international law over his threat to override parts of the treaty governing Britain’s exit from the European Union. In recent days, the 58-year-old had faced a huge internal revolt in his Conservative Party for appointing a politician accused of sexual assault.

“It has been a dramatic week – the craziest week I have ever experienced in all my time, and I am pleased we got here today,” Tobias Ellwood, Conservative member of parliament, told Al Jazeera.

“But we should have been here months ago and [we should have] recognised that Boris Johnson was not going to allow us to win the next general elections,” he said.

On Tuesday, Rishi Sunak and Sajid Javid, the chancellor and the health minister, respectively, quit their positions citing Johnson’s lack of “integrity” and “competence”.

That set off a series of resignations, with several other top ministers either quitting or calling on Johnson to resign.

Despite the mass resignations that followed, Johnson had been clinging on to power. Tipping the balance was Thursday’s departure of education minister Michelle Donelan and a plea to quit from Finance Minister Nadhim Zahawi. Both had been in their jobs for only days.

‘Need a proper change of government’

Keir Starmer, the leader of Britain’s Labour Party, said Johnson’s departure was “good news”, but just changing the leader of the Conservative Party was not enough. “We need a proper change of government,” he said.

Scotland’s First Minister Nicola Sturgeon also said Johnson should not be allowed to stay in the job temporarily, and said a general election would be in the country’s best interest.

“It is quite incredible to suggest that he will remain as prime minister for another three to four months,” Sturgeon said in a televised statement.

Asked about a general election, the Scottish leader said she thought holding a vote would be “in the interests of the UK as a whole right now”, but that she thought that outcome was unlikely.

Questions now loom over what is going to be the next British prime minister’s approach on issues such as the country’s staunch support of Ukraine against Russia and the country’s strained relations with the EU.

Patrick Diamond, from Queen Mary University of London, said that UK support for Kyiv will likely remain, but a new leader does not mean that relations with the EU will improve.

“There is an assumption that with Boris Johnson moving on he will be replaced by a Conservative Party leader and PM who takes a more emollient position on Europe and is prepared perhaps to enter a more constructive relationship with it on questions such as the Northern Ireland protocol,” Diamond said.

“This is not necessarily the case. There are potential candidates for the leadership of the party and the premiership who could be even more robust in the handling of European issues,” Diamond noted, citing as an example the current Foreign Secretary Liz Truss.

“But it is also an opportunity to turn the page,” he said.