As the Russia-Ukraine war grinds on, Poland is becoming an increasingly valuable NATO member.

Firmly on Kyiv’s side, the central European nation shares borders with Ukraine, Russia’s exclave of Kaliningrad, and Belarus, and is a bulwark against Moscow’s aggression on the NATO alliance’s eastern flank.

Along with the United States, United Kingdom and Baltic states, Warsaw supports policies that aim to sanction and punish Moscow for its devastating war on Ukraine.

“Poland is at the tip of NATO’s spear against Russia at this juncture,” Theodore Karasik, a fellow for Russian and Middle Eastern Affairs at the Jamestown Foundation, told Al Jazeera.

“With Poland bordering on the Kaliningrad oblast, there is increasing concern about how this geography will play out as Russia continues its aggressive attempts to expand its ‘sovereignty,’” he said.

“As the NATO build-up against Russia continues, the geography of the Baltic Sea and outlets from these countries via ports will be contested in the future given current trend lines.”

Kaliningrad, a territory few could point to on a map until recently, attracted international attention in June when Lithuania banned the transit of sanctioned goods through its land. Russia has since threatened retaliatory measures. 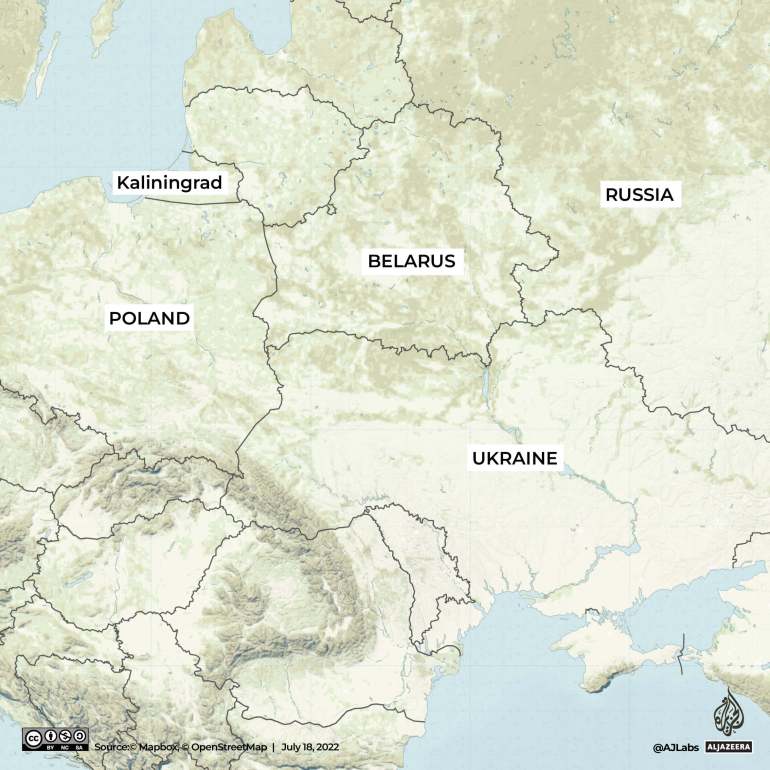 Before the Ukraine war, Poland, having long sought increased security guarantees from more powerful NATO members, lamented what it saw as insufficient military support from the alliance.

In 2018, Warsaw proposed establishing a grand US-Polish military base – to be called “Fort Trump” after former US President Donald Trump – in Poland. But that project went nowhere as Trump ultimately decided such a base on Polish soil would provoke the Kremlin.

But Russia’s war on Ukraine, which began on February 24 this year, has reshaped the European security landscape and brought about changes in the US-Poland alliance.

At a NATO summit last month, Washington said it would establish the US 5th Army Corps headquarters in Poland, adding weight to the US military footprint in Europe.

“Something that seemed impossible to many is becoming a fact today,” tweeted Poland’s Deputy Foreign Minister Marcin Przydacz following the announcement.

After Russia’s annexation of the Crimean Peninsula in 2014, Poles worried about Moscow’s foreign policy agenda in Eastern Europe.

Poland joined NATO 15 years earlier, but viewed Russia as a direct security threat. The Polish perception goes much further back in history, however.

“For centuries, Russia has coveted Polish territory and invaded it many times,” Matthew Bryza, a former US ambassador to Azerbaijan, told Al Jazeera.

“In fact, Russia, together with Prussia and Austria, carved up Poland in three different [ways] from 1772 until 1795, which led to Poland no longer existing on Europe’s map. Russia throughout the centuries has felt threatened by Poland and has constantly tried to take it over.

“In 1920, the Bolsheviks tried to spread the Bolshevik Revolution to Poland by force and were stopped, by the Polish miraculously, in a battle known as the battle of the Miracle on the Vistula. After World War II, Russia, in the form of the Soviet Union, sort of occupied Poland.”

A united Europe against Russia?

Warsaw sees the invasion of Ukraine as a wake-up call to the rest of Europe and hopes that Russian aggression is taken more seriously.

For their part, Russian officials have mocked Poland and accused government leaders of promoting “Russophobia”.

Nonetheless, Poland and some other NATO and European Union states are still not on the same page about how to deal with Moscow.

“But NATO is managing those tensions and, overall, has done a fantastic job in responding in a way Putin I think never expected,” said Bryza. “NATO, the EU, and the US have maintained their solidarity.”

Hungary and Poland are traditionally close, with relations dating back to the Middle Ages and Renaissance period, when several kings of Poland were Hungarian.

In contemporary times, the Visegrad Group brings the pair together to coordinate their EU integration policies, and both nations are led by populist governments, meaning they share similar “values”.

Yet the war in Ukraine heightened their differences because while Poland is staunchly in favour of making Russia pay for its unprovoked invasion, “Hungary wants to do business with Russia,” said Bryza.

Even before February 24, Poland and Hungary had been moving in different directions, underscored by Budapest’s doctrine of “strategic calmness” in relation to the Russian annexation of Crimea in 2014.

At a briefing with Ukrainian Ambassador to Hungary NEPOP LJUBOV

“Strategic calmness is what will be in the grave.” pic.twitter.com/wjhFvQtr30

“[Hungarian Prime Minister Viktor] Orban has been cooperating with Russia for years and has very special relations with the People’s Republic of China, whereas Poland, especially since 2015 [when the nationalist Law and Justice Party came to power], is staunchly pro-American,” Paweł Pawłowski, the chairman of the Foundation Council at the Warsaw Institute, told Al Jazeera.

“The Polish government has clearly limited its contacts now with Budapest. It’s very clear that there is no coming back to the way we were communicating before February 2022.”

And as well as providing weapons and political solidarity to Kyiv, Poland has absorbed more than three million Ukrainian refugees.

The influx saw Warsaw’s population swell by 15 percent within the first 10 weeks of the conflict. As of last month, Polish cities were home to more than two million Ukrainian refugees.

“On every street corner and in major cities [in Poland] you’ll see Ukrainian flags next to Polish flags,” Bryza said, while in Krakow. “Poland is treating Ukraine as a brother country and Ukrainians are really grateful for it.”