Kyiv, Ukraine – There was a death sentence, but there will not be an execution.

That is what Igor Kozlovsky, who spent almost two years in the torture chambers and jails of the separatist, Russia-backed “People’s Republic of Donetsk” said about what will happen to two Britons and one Moroccan sentenced to death there.

UK nationals Aiden Aslin, 28, and Shaun Pinner, 46, and Moroccan Brahim Saadoun, 21, fought for the Ukrainian military among thousands of other foreigners who signed up to fight the Russian invasion.

They were captured by pro-Russian separatists and charged with attempting to “seize power” and “training in order to conduct terrorist activity”, according to separatist “prosecutors”.

The Donetsk’s “Supreme Court” called them “mercenaries” in what seemed like a legal effort to place them outside the remit of the Geneva Conventions.

The Conventions afford war prisoners immunity from prosecution for military actions deemed to be lawful.

The court passed the death sentence on Thursday in accordance with the Stalinist-era constitution that the separatists “restored” in their totalitarian statelet.

The three face death by firing squad, but can appeal their sentence within a month, separatist judge Alexander Nikulin said, according to the rebel-run Donetsk News Agency.

I utterly condemn the sentencing of Aiden Aslin and Shaun Pinner held by Russian proxies in eastern Ukraine.

They are prisoners of war. This is a sham judgment with absolutely no legitimacy.

My thoughts are with the families. We continue to do everything we can to support them.

But the separatists will not dare execute the three, said Kozlovsky, who was captured in 2016 for his pro-Ukrainian stance and survived months of torture and death threats until he was swapped and taken to Kyiv in 2018.

“They won’t risk to execute them. We’ve had similar cases when people were sentenced to capital punishment and were swapped,” the 68-year-old professor who taught religious studies at Donetsk State University told Al Jazeera.

The sentence “was Moscow’s decision to increase the price, frighten the West”, he said.

In the photos and video footage released by separatist and Russian media, the three looked haggard, pale and exhausted.

They all pleaded guilty because they were tortured, according to Kozlovsky, who recalled his own experience.

And yet, the separatists and their Kremlin backers do not need the trial to end with the death of the three.

They aim for a much bigger political prize.

The separatists’ “People’s Republic of Donetsk”, known in Ukraine as the DNR, and its smaller sibling in neighbouring Luhansk, known as the LNR, are desperate for recognition.

Even Russia, whose military, political and financial backing created them in 2014 and kept them afloat for eight years, recognised their independence only on February 22, two days before the war began.

The rest of the world, including Moscow’s staunchest allies, never did.

The sentence will force London to start direct negotiations with Donetsk, giving the rebels at least a veneer of legitimacy.

“The trials are being held on the basis of the legislation of the Donetsk People’s Republic, because the crimes in question were committed on the DPR’s territory,” Sergey Lavrov was quoted by Russian media as saying on Thursday.

And the very possibility of execution remains a “subject of haggling”, Tyshkevich said.

The negotiations will not just involve a European nation – but one of Ukraine’s biggest international backers.

After more than three months of the war, London forged unprecedently close ties with Kyiv.

But Ukrainians love him.

A street in the Black Sea port of Odesa and an apple cinnamon pastry in a Kyiv bakery were named after him, and even Cossacks, the caste of legendary Ukrainian warriors, made him “one of their own”.

So, the death sentence to the two Britons “is a blow to the rapprochement of Ukraine and the Great Britain”, Kyiv-based observer Aleksey Kushch told Al Jazeera.

“That’s why the sentence is so extreme,” he said.

The death sentence, and the search for a way to save the servicemen, seem to have caught London by surprise.

“The Brits are at a loss, they don’t know how to act,” Vadim Karasev, head of Institute of Global Strategies, a Kyiv-based think-tank, told Al Jazeera.

One of the ways of saving face and not recognising the DNR would be to act via Kyiv and its diplomatic and humanitarian channels, he said.

“But those in Donetsk will wait until the end. They expect the Brits to swallow the bait,” Karasev said. 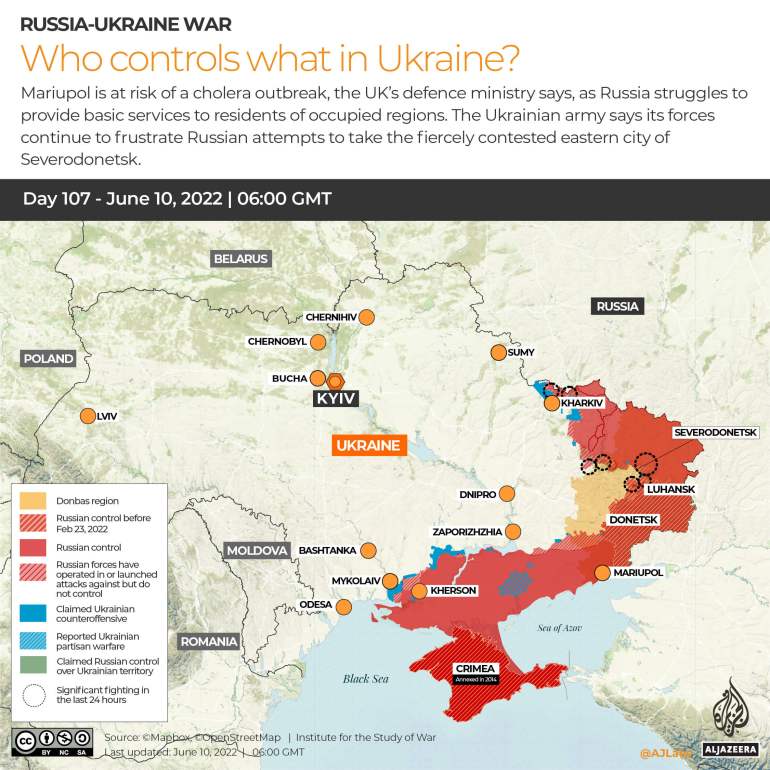