Ukraine says troops defending the country’s second-largest city Kharkiv have pushed Russian forces back and advanced as far as the border with Russia.

Fighting was reported near Kharkiv on Monday in what interior ministry adviser Vadym Denisenko said was “our counteroffensive”.

“It can no longer be stopped … Thanks to this we can go to the rear of the Russian group of forces,” said Denisenko.

The Ukrainian defence ministry published a video on Facebook purportedly showing about a dozen Ukrainian soldiers at a border post on Sunday.

Kharkiv regional governor, Oleh Sinegubov, wrote on the Telegram messaging app the troops had restored control of the area.

“We thank everyone who, risking their lives, liberates Ukraine from Russian invaders,” Sinegubov said.

The defence ministry said the 227th Battalion of the 127th Brigade of Ukraine’s Territorial Defence Forces reached the border with Russia, adding: “Together to victory!”

Al Jazeera could not immediately verify the claim. If confirmed, it would suggest the Ukrainian counteroffensive is having increasing success in removing Russian forces from the northeast. 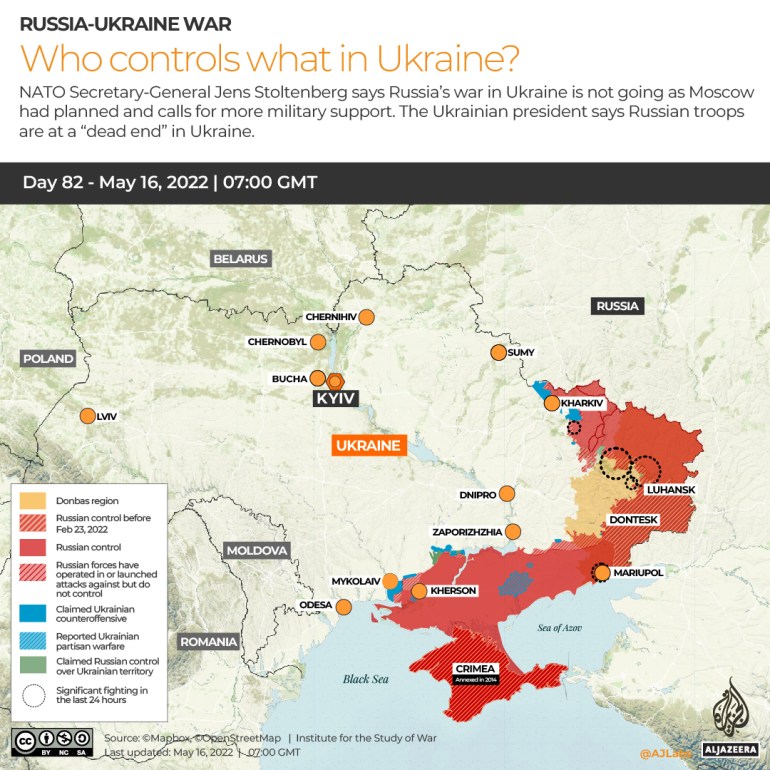 Ukraine has scored a series of successes since Russia invaded on February 24, forcing Russia’s commanders to abandon an advance on the capital Kyiv before making rapid gains around Kharkiv, 50km (30 miles) from the border.

The second city had endured weeks of heavy bombardment from Russian artillery.

Al Jazeera’s Assed Baig, reporting from near Kharkiv, said the situation in the city was returning to normal.

“When we first came to Kharkiv [a month ago] we couldn’t enter without wearing body armour, the streets were empty, and there was constant firing and shelling going on all around us,” Baig said.

“Now people have returned, people are outside, and some cafes and restaurants have opened up. Today is also the first day that public transport is running … The atmosphere has completely changed and that’s because the Ukrainians have managed to push the Russians further away.”

Western military agencies said on Sunday that Moscow’s offensive in two eastern Ukraine provinces known as the Donbas had stalled.

However, the governor of the Luhansk region in Donbas, Serhiy Haidai, said the situation “remains difficult”, with Russian forces trying to capture the main city of Severodonetskh.

He said leaders of the Luhansk People’s Republic, the territory in Luhansk controlled by Russian-backed separatists, declared a general mobilisation, adding it was “either fight or get shot, there is no other choice”.

In the south, fighting was raging around the city of Kherson and Russian missiles struck residential areas of Mykolaiv, the presidential office in Kyiv said.

Russia calls its invasion of Ukraine a “special military operation” to rid the country of fascists, an assertion Kyiv and its Western allies say is a baseless pretext for an unprovoked war.

Thousands of people, including many civilians, have been killed across the country, towns and cities have been blasted into ruins, and more than six million people have fled their homes to seek refuge in neighbouring states in scenes not seen in Europe since the Balkan wars of the 1990s. Russia denies targeting civilians. 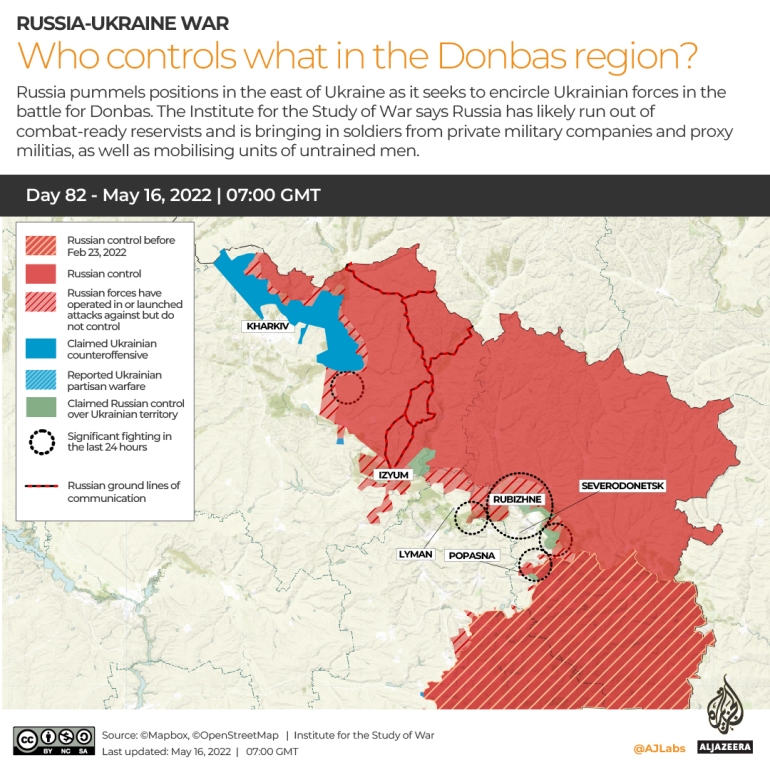