Russia has launched a full-scale military attack on Ukraine that opened with air and missile attacks on Ukrainian military facilities before troops and tanks rolled across the borders from the north, east and south.

The Ukrainian military has fought back on multiple fronts. President Volodymyr Zelenskyy said in a video address early on Friday that 137 people, both servicemen and civilians, have been killed and hundreds more wounded.

A senior United States defence official said Russia may be intent on seizing Kyiv, the capital, and other key cities and ultimately installing a more friendly government.

As Ukrainian forces fought back and civilians piled into trains and cars to flee, the US and European leaders rushed to punish Russia with strong financial sanctions. NATO moved to strengthen its eastern flank.

Here is what we know about the conflict so far:

In a televised address as the attack began, Russian President Vladimir Putin said it was needed to protect civilians in eastern Ukraine, where Ukrainian forces and Russia-backed separatists have been fighting for almost eight years.

The Russian leader warned other countries that any attempt to interfere in Ukraine would “lead to consequences you have never seen in history”.

Putin accused the US and its allies of ignoring Russia’s demands to block Ukraine from ever joining NATO and offer Moscow security guarantees.

Putin said Russia does not intend to occupy Ukraine but plans to “demilitarise” it, a euphemism for destroying its armed forces. He urged Ukrainian servicemen to “immediately put down arms and go home”.

Soon after his address, explosions were heard in the cities of Kyiv, Kharkiv and Odesa. The Russian Defence Ministry said it had destroyed 83 Ukrainian military facilities.

Ukraine’s president urged residents to remain calm and stay at home, and pleaded with world leaders to punish Putin with even more severe sanctions.

He promised that Ukraine will defend itself and ordered a full military mobilisation. Ukraine’s army stands at 250,000 service members with 140,000 reservists. The US said Russia had nearly 200,000 troops arrayed near Ukraine’s borders before the invasion began.

Zelenskyy said he has information that he is the No. 1 target for the invading Russians, but he is determined to remain in Kyiv.

An uneasy night in Kyiv

By Thursday evening, many of the capital’s residents took shelter deep underground in metro stations. People brought sleeping bags and blankets, dogs and crossword puzzles to pass an uneasy night in the makeshift bomb shelters.

Kyiv Mayor Vitali Klitschko had called on the city’s three million people to stay indoors unless they worked in critical sectors and said everyone should prepare go-bags with necessities such as medicine and documents. 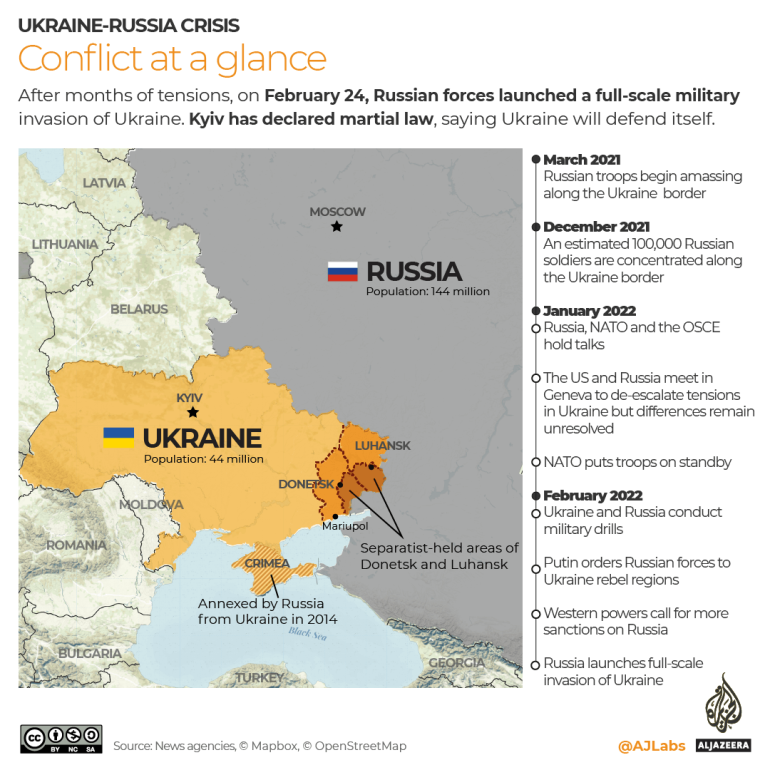 Ukraine said it lost control of the Chernobyl nuclear site after Ukrainian forces waged a fierce battle with Russian troops. A nuclear reactor at the plant 130km (81 miles) north of Kyiv exploded in April 1986, sending a radioactive cloud across Europe. The damaged reactor was later covered by a protective shell.

Alyona Shevtsova, an adviser to the commander of Ukraine’s Ground Forces, wrote on Facebook that the staff had been “taken hostage” when Russian troops seized the facility.

US President Joe Biden said Putin “has chosen a premeditated war that will bring a catastrophic loss of life and human suffering”.

The leaders of the Group of Seven called on the international community “to condemn this attack in the strongest possible terms, to stand shoulder to shoulder with Ukraine, and raise their voice against this blatant violation of the fundamental principles of international peace and security”.

The head of the UN refugee agency urged neighbouring countries to keep their borders open for Ukrainians fleeing the fighting. UN High Commissioner for Refugees Filippo Grandi said his agency had stepped up its operations and capacity in both Ukraine and its neighbours.

In announcing a new round of sanctions on Thursday, Biden said the US and its allies will block the assets of four large Russian banks, impose export controls and sanction oligarchs.

The penalties fall in line with the White House’s insistence that it would look to hit Russia’s financial system and Putin’s inner circle while also imposing export controls that would aim to starve Russia’s industries and military of US semiconductors and other high-tech products.

New US sanctions also focused on the military and financial institutions of Belarus, which Russia is using as a staging ground for its troops moving into Ukraine from the north.

United Kingdom Prime Minister Boris Johnson said he would aim to cut Russia off from the UK’s financial market.

The sanctions include freezing the assets of all big Russian banks, including VTB Bank, its second-biggest. The UK also plans to bar Russian companies and the Russian government from raising money on its markets.

The UK will ban the export of a wide range of high-tech products, including semiconductors, to Russia and bar its flagship airline, Aeroflot, from landing at UK airports.

The European Union and other Western allies, including Australia, Japan and South Korea, announced similar sanctions.