The death toll from flash floods and landslides that hit the Brazilian city of Petropolis has risen to 186, authorities said, one week after torrential rains lashed the tourist town.

Since the storm, rescue workers have searched for victims, digging through the mud and wreckage left by devastating landslides that mainly hit poor hillside communities.

The number of people missing currently stands at 69, a figure that has been falling as victims’ bodies are identified and as families separated in the initial chaos manage to reunite.

Police said 33 children were among those killed in the February 15 deluge, which dumped a month’s worth of rain on the southeastern city in several hours.

More than 850 people who lost their homes or had to evacuate are still being housed in emergency shelters. 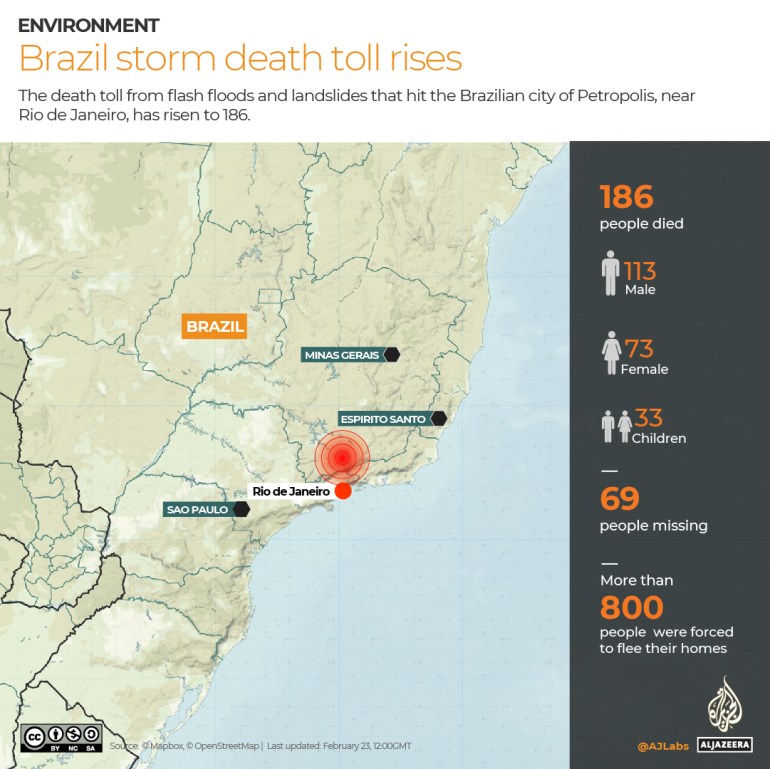 Alexandro Conde lived and worked in the Morro da Oficina region, a hillside part of Alto da Serra, where the huge landslide engulfed dozens of houses.

Among the collapsed structures was Conde’s screen printing workshop, where his 18-year-old son Kaique, his close friend Thiago and his brother Ivan were working.

“When I arrived, I saw this (destroyed houses in the landslide). Then it was just a scream of pain because I knew that my son and my brother were there,” Conde told The Associated Press news agency.

Officials are waging a huge clean-up operation to clear the mud, rubble and stranded vehicles strewn around Petropolis, a picturesque city of 300,000 people that was the 19th-century summer capital of the Brazilian empire.

In the past three months, at least 236 people have died in severe storms in Brazil.

Experts say the violent rains are being made worse by climate change.