Rescue workers are racing against time, searching for any remaining survivors among mud and wreckage after devastating flash floods and landslides hit the picturesque Brazilian city of Petropolis, as authorities said on Thursday the death toll had risen to 110.

Streets were turned into rivers and houses swept away when heavy storms dumped a month’s worth of rain in three hours on the scenic tourist town in the hills north of Rio de Janeiro.

With dozens still reported missing, fears that the death toll could climb further sent firefighters and volunteers scrambling through the remains of houses washed away in torrents of mud, many of them in impoverished hillside slums. 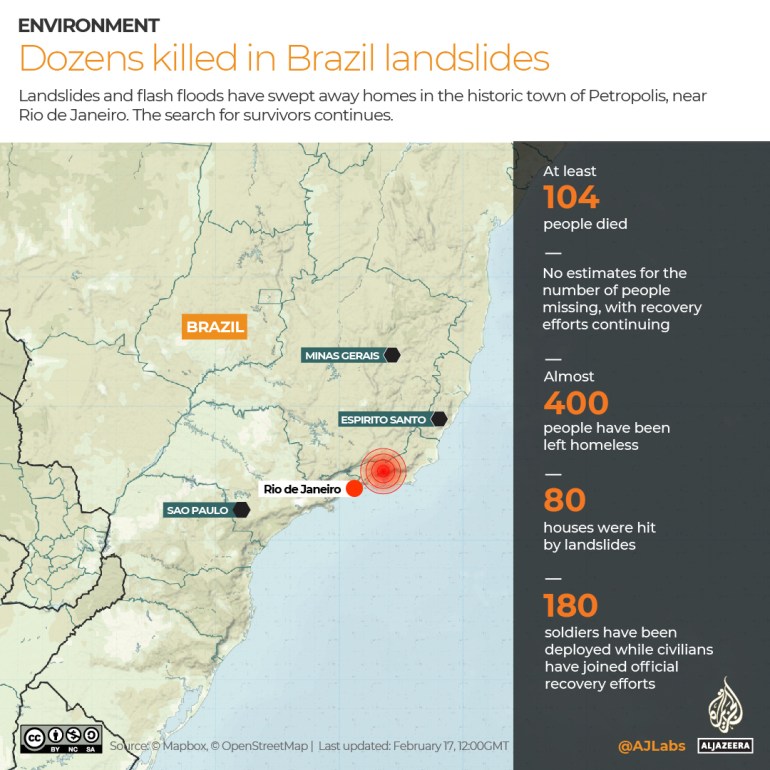 It is the latest in a series of deadly storms to hit Brazil in the past three months, which experts say are being made worse by climate change.

Amid the rising death count, local officials said 134 people remain missing, with many feared trapped in mud beneath the German-influenced city nestled in the mountains above the city of Rio.

About 300 people were being housed in shelters, mostly in schools, officials said. Charities called for donations of mattresses, food, water, clothing and face masks for victims.

Wendel Pio Lourenco, a 24-year-old resident, was walking through the street with a television in his arms, heading to a local church in search of shelter.

He said he was trying to save a few possessions, after spending a sleepless night helping search for victims.

“I found a girl who was buried alive,” he said.

“Everyone is saying it looks like a war zone.”

Governor Claudio Castro said the same after visiting the scene.

“It looks like a scene from a war. It’s incredible,” he said, adding that it was the worst rain since 1932.

He praised rescue workers for managing “to save a large number of people before it was too late”.

Videos posted on social media from Tuesday’s rains showed streets in Petropolis, the 19th-century summer capital of the Brazilian empire, filled with violent floods that swept away cars, trees and nearly everything else in their paths.

Many shops were inundated by the rising water, which gushed down the streets of the historic city centre, leaving jumbled piles of overturned cars in its wake.

Officials said more than 180 firefighters and other rescue workers were responding to the emergency, aided by 400 soldiers sent in as reinforcements.

The city council declared three days of mourning for victims.

Petropolis is a popular destination for tourists fleeing the summer heat of Rio.

The area is known for its leafy streets, stately homes, imperial palace – today a museum – and the natural beauty of the surrounding mountains.

Tuesday’s storms dumped 258 millimetres (10 inches) of rain on the city in three hours, nearly equal to the total rainfall in the previous month, the mayor’s office said.

The heaviest downpour had passed, but more moderate rain was expected to continue on and off for several days, authorities said.

President Jair Bolsonaro, on an official trip to Russia, said on Twitter he was keeping abreast of the “tragedy”.

“Thank you for your words of solidarity with the people of Petropolis,” he told President Vladimir Putin after meeting with the Russian leader.

“May God comfort [the victims’] families.”

Brazil has been swept by heavy rains since December that have caused a series of deadly floods and landslides.

Experts say rainy season downpours are being augmented by La Nina – the cyclical cooling of the Pacific Ocean – and by the impact of climate change.

Because a warmer atmosphere holds more water, global warming increases the risk and intensity of flooding from extreme rainfall.

There have also been heavy rains in the northeastern state of Bahia, where 24 people died in December.

Petropolis and the surrounding region were previously hit by severe storms in January 2011, when more than 900 people died in flooding and landslides.