A leadership election will be completed within the next week to choose a successor to Liz Truss after she announced her resignation following just 45 days in office, and became the shortest-serving prime minister in British history.

Given the divisions in the ruling Conservative Party, there is no obvious candidate and any replacement would face a country which is probably heading into a recession.

Al Jazeera’s Charlie Angela, reporting from Westminster, said events have moved much faster than anyone anticipated.

It was a chaotic 24 hours with Home Secretary Suella Braverman resigning amid rumours she was sacked, chaos in Parliament with Conservative members reportedly being pushed and shoved, allegations of bullying, and a chief whip who resigned, then un-resigned after being begged to stay by Truss.

“Now the question is – who can replace her?” said Angela.

Nominations for the contest close on Monday afternoon, with leadership hopefuls needing the support of at least 100 MPs to make the ballot. The Conservatives have 357 lawmakers in Parliament at the moment.

Party members may also get an online vote.

These are the potential names to watch in the race to succeed Liz Truss:

The United Kingdom’s former finance minister was the most popular candidate among Conservative lawmakers at Westminster in a leadership contest earlier this year.

But after getting through to a run-off against Truss, he lost out in a vote involving some 170,000 party members. They made the final decision based on promises by Truss to slash taxes and regulations without curbing government spending.

Sunak, 42, had warned her plans to fund the proposals through extra borrowing were reckless and could worsen decades-high inflation, as well as market confidence in the UK.

Now that he has been proven right, Sunak was installed by bookmakers as the early favourite following Truss’s resignation announcement.

A new YouGov poll on Tuesday found he has the best ratings of the touted alternatives to Truss – albeit still with an overall net favourability rating of -18.

But many members of the party were angry when Sunak quit in July, helping to trigger a rebellion that eventually brought down ex-leader Boris Johnson.

Many party members, who usually get the final say on who leads the party, are unwilling to forgive him for that. 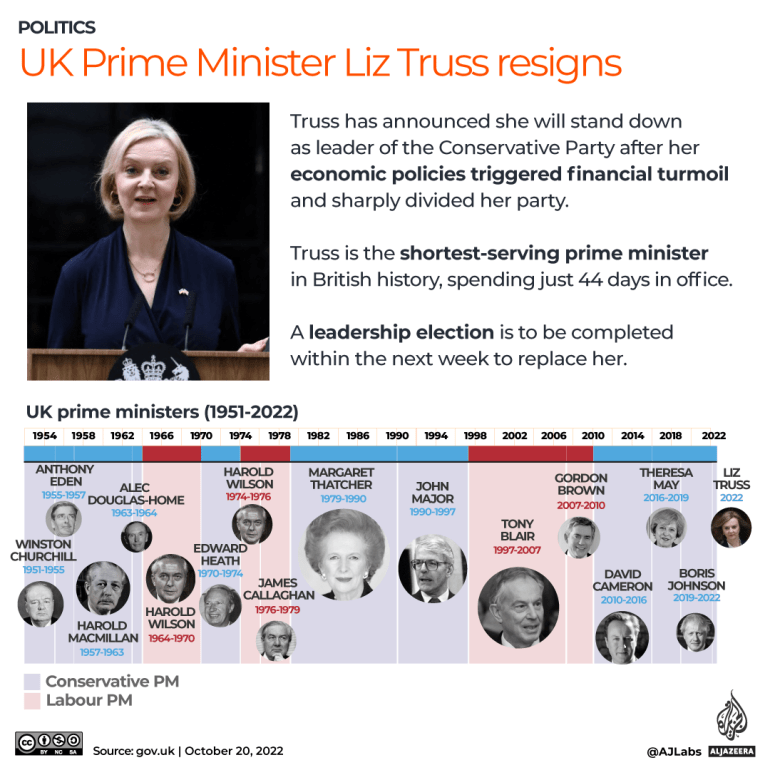 Former Prime Minister Boris Johnson, once a journalist, has loomed large over British politics ever since he became London mayor in 2008. After causing trouble for leaders such as David Cameron and Theresa May, he finally became prime minister in 2019 and went on to win a landslide election victory.

Johnson was the face of the Brexit referendum and won votes in parts of the country that had never voted Conservative before.

But the former prime minister was forced out of office, after a revolt among his cabinet and Conservative members of Parliament, sparked by mass ministerial resignations amid months of controversies.

A recent YouGov poll showed the 58-year-old is far more popular than Truss. Yet about two-thirds of those asked had an unfavourable opinion of him.

Encouraged by several strong hints from Johnson himself, speculation has swirled ever since that he would attempt an eventual comeback – though few thought that could be feasible this quickly.

Johnson is flying back to the UK this weekend, a journalist at the Daily Telegraph newspaper reported on Thursday. The Times newspaper reported that Johnson, who is on holiday abroad, was expected to stand in the race to replace Truss.

The UK’s defence secretary is one of the few ministers to have emerged from recent political turmoil with his credibility enhanced. Wallace, a former soldier, was defence minister for both Johnson and Truss, leading the UK’s pivotal role in the global response to Russia’s invasion of Ukraine.

Popular with party members, he surprised many earlier this year when he said he would not run for the leadership, saying he wanted to focus on his current job.

But asked at the recent Conservative Party conference if he would reconsider, the 52-year-old said, “I don’t rule it out.”

In the most recent survey of Conservative activists by the website ConservativeHome, Wallace scored a net approval rating of 85.8 points, far ahead of any potential rivals.

While a soldier, Wallace led a patrol that captured an IRA unit attempting to carry out a bomb attack. He was also part of the team that brought home the body of Princess Diana following her car crash in Paris.

A former defence secretary, Mordaunt was a passionate supporter of leaving the European Union and a key figure in the 2016 “Leave” campaign.

The current cabinet member, 49, was an early grassroots favourite to succeed Johnson, and came within eight legislators’ votes of beating Truss to make the final run-off against Sunak.

But she faced criticism in the recent leadership race, with some lawmakers accusing her of being ineffective in previous government roles.

Mordaunt’s profile rose this week after she was sent out on Monday in place of Truss to answer an urgent question in Parliament from the Labour opposition about the recent economic turmoil.

Despite being forced to explain that the prime minister was “not under a desk” – in response to accusations that Truss was in hiding – Mordaunt was seen to have coped well with a febrile House of Commons.

A Royal Navy reservist, Mordaunt has navigated the tenures of the four prime ministers she’s served under, keeping her distance from Johnson’s scandal-ridden time in power, and staying in the cabinet under May to make her support for Brexit felt.

The international trade secretary also ran in the last leadership contest – despite having been an MP for only five years – and made it to the final four.

The former interior minister – who lasted a day less in office than Truss – has emerged as a darling of the Conservative right, burnishing her credentials with tough talk on immigration, policing and crime during the few weeks she was in office.

Braverman, an attorney general in Johnson’s government, resigned after breaking rules by sending an official document from her personal email account, and used her resignation letter to lambast her former boss.

“The business of government relies upon people accepting responsibility for their mistakes,” she said. “Pretending we haven’t made mistakes, carrying on as if everyone can’t see that we have made them and hoping that things will magically come right is not serious politics.”

Braverman ran in the previous leadership election but only made it to the second round.

After Truss’s economic programme collapsed and she fired her Chancellor Kwasi Kwarteng, she turned to Hunt, a former health and foreign minister, to put things right.

A series of confident performances on television and in the House of Commons, as he ripped up Truss’s economic manifesto, have already led to some Conservative lawmakers referring to Hunt as the “real prime minister”.

He has insisted he does not want the top job, despite entering two previous races to become prime minister, including in 2019 when he lost out in the final round to Johnson.

Hunt does not have the obvious support of a large group of lawmakers in Parliament.