Born in London in 1975 to Ghanaian parents who had emigrated to the United Kingdom as students in the 1960s, Kwarteng has broken new ground in becoming the first Black person to hold the role of chancellor of the Exchequer.

But the path he followed to 11 Downing Street is well worn.

He studied at Eton College and the University of Cambridge – among the country’s most elite institutions – and has worked in the media and finance.

“Some people would say that he’s had a conventional rise to the top, from [fee-paying] public school through an elite university to the Conservative [Party] … and then a top cabinet job,” Tim Bale, a professor of politics at the Queen Mary University of London, told Al Jazeera.

“And as far as his position goes, he is very much on the neoliberal right of the Conservative Party, he is a market fundamentalist.”

The journey into politics

After graduating, he worked as a columnist for the UK’s conservative-leaning Daily Telegraph newspaper – a job once also held by the scandal-hit former premier Boris Johnson – before moving into banking as a financial analyst with the American investment firm JP Morgan.

In 2000, he returned to Cambridge to complete a PhD in economic history, and turned his attention to politics.

In 2010, Kwarteng was elected to the House of Commons as part of a new intake of Conservative Party politicians, including now-Prime Minister Liz Truss and other politicians who would go on to enjoy a high profile, including Dominic Raab, Priti Patel and Sajid Javid.

While he earned a reputation among colleagues as a rising star, Kwarteng was forced to wait several years for his first ministerial position, as others moved ahead quickly.

During that time, he accustomed himself to the cut and thrust of Westminster politics and wrote several books on subjects including finance, former Conservative leader Margaret Thatcher and British imperialism.

He also co-authored Britannia Unchained, a collection of essays by several Conservative MPs, including Truss, which criticised British workers for being “among the worst idlers in the world” and denounced the UK’s “bloated state, high taxes and excessive regulation”.

Kwarteng’s long-anticipated promotion eventually came in 2017, when he was made parliamentary private secretary to then-Chancellor Phillip Hammond.

Since, he has steadily climbed the political ladder, holding roles as a minister at the Department for Business, Energy and Industrial Strategy and business secretary.

Now, as chancellor, Kwarteng finds himself in charge of an ailing UK economy beset by soaring inflation and a cost-of-living crisis.

“This is a once-in-a-lifetime crisis,” Jeevun Sandher, head of economics at the New Economics Foundation think-tank, told Al Jazeera. “It is possibly the most serious set of circumstances that have confronted any chancellor since the second world war.”

Kwarteng will reveal his plan for fixing the nation’s finances on Friday when he will introduce a “mini” budget to the House of Commons setting out the government’s fiscal priorities.

He is expected to provide further details on a sweeping intervention in the energy market, which has been roiled by Russia’s invasion of Ukraine. The move is predicted to cost as much as 150bn pounds ($170bn).

Kwarteng is also reportedly preparing to announce tens of billions of pounds worth of tax cuts, including a reversal of the rise in national insurance contributions introduced by Johnson’s administration, cancelling a planned increase in corporation tax from 19 to 25 percent and slashing stamp duty rates for those buying homes.

His intentions have been clearly signalled.

In an open letter published by the Financial Times ahead of his appointment as chancellor, Kwarteng said Truss’s administration had “two urgent responsibilities” – to help individuals and businesses facing “severe price shocks”, including sharp upticks in their gas and electricity bills, and to boost economic growth.

“Action is needed to get families and businesses through this winter and the next,” he wrote, adding it was imperative to “lay the groundwork” for long-term change.

“This means cutting taxes, putting money back into people’s pockets and unshackling our businesses from burdensome taxes and unsuitable regulations.”

Kwarteng’s self-described “unashamed” emphasis on growth has also seen him put banking bosses on notice that he wants to engineer a “Big Bang 2.0” for the City of London to heighten competition in the UK’s financial sector, which accounts for 8.3 percent of its total economic output.

He is reportedly considering scrapping a cap on bankers’ bonuses introduced by the European Union in 2014.

The curb, adopted by the UK when it was yet a member state, meant bonuses were limited to no more than 100 percent of an employee’s salary, or double that with shareholder approval. 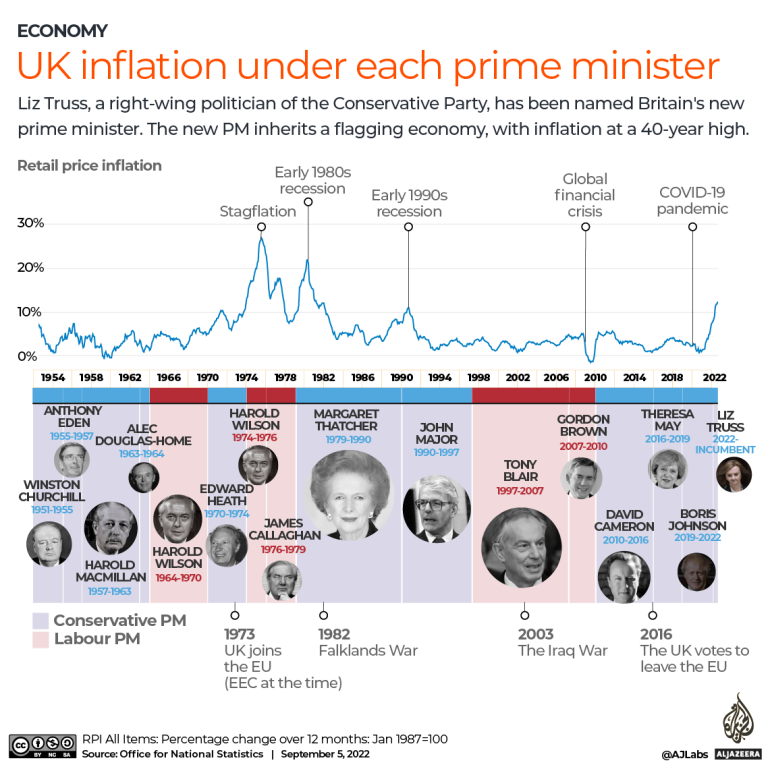 ‘The vast majority are going to lose out’

Overall, Kwarteng’s vision has echoes of the trickle-down, neoliberal economic policies pursued by previous Conservative governments, including the one led by Thatcher from 1979-1990.

“[Kwarteng] believes in the state getting out of the way and in Britain maximising its main comparative advantage which he sees as the City of London and finance,” Bale said.

“[But] presumably, with his economic history background, he has got a fair idea of what hasn’t worked in the past.

“So it seems slightly strange that he’s taking this very radical, tax-cutting leads directly to growth approach, since there’s very little evidence for that, either in the UK or in the world as a whole.”

With an election expected in 2024, Kwarteng will be hoping his measures show signs of benefitting the economy quickly.

But critics, including Sandher, argue his strategy will only increase inequality, helping “the rich get richer” while people on low to middle incomes continue to struggle.

“They [Truss’s government] know they have one roll of the dice,” Sandher said.

“In terms of a gamble … irrespective of what happens, it is very clear that the British people will lose. They will not have the investment they need for the future and they will not be [lifted] out of the cost-of-living crisis.

“The economic outcome is going to be that the vast majority are going to lose out, and the top one percent are going to win.”