More than 50 Western countries have met in Brussels to pledge more weapons for Ukraine, especially air defence systems, after Russia launched its most intense missile barrage since the war began.

At Wednesday’s meeting of the Ukraine Defense Contact Group, US Secretary of Defense Lloyd Austin said Russia’s latest attacks had laid bare its “malice and cruelty” since invading Ukraine on February 24.

Ukraine had shifted momentum since September with extraordinary gains but would need more help, he said.

“These victories belong to Ukraine’s brave soldiers, but the Contact Group’s security assistance, training and sustainment efforts have been vital,” Austin said.

Hundreds of cities and towns across Ukraine lost power after Russia’s wide-ranging missile assault on Monday.

The attacks, using more than 100 missiles, have killed at least 26 people across Ukraine since Monday when President Vladimir Putin ordered them in what he said was retaliation for an explosion on a key bridge linking Russia and Crimea that he blames on Kyiv.

Air raid sirens sounded across swaths of Ukraine for a third day on Wednesday, and there were reports of some shelling, but no sign of a repeat of the intensive countrywide attacks of the previous two days.

The missiles have mostly targeted civilian electricity and heating infrastructure while some hit busy roads, parks and tourist sites, including in the centre of Kyiv. 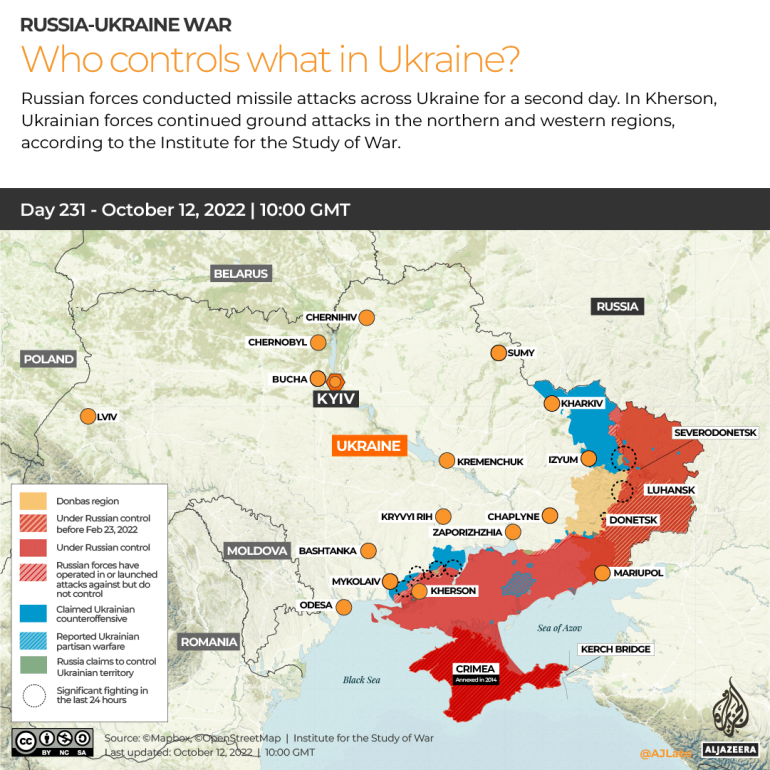 “We’re going to deliver … radar systems and missiles to protect them from these attacks,” Macron told France 2 television, adding that France was also negotiating to send a further six Caesar mobile artillery units.

The Advanced Medium-Range Air-to-Air Missile, or AMRAAM, will be provided in the coming weeks and could be used with the US NASAMS air defence systems.

The UK also plans to give Ukraine hundreds of other types of air defence missiles as well as aerial drones and a further 18 howitzer artillery guns.

The Czech Republic said it would turn away Russians holding Schengen-zone visas from October 25 as it joined other European Union members in tightening entry rules.

“While Russian rockets fall on a children’s playground and on people in Ukraine, up to 200 Russian Federation citizens travel to the Czech Republic via international airports every day,” Foreign Minister Jan Lipavsky said.

“The more assistance Ukraine gets now, the sooner we’ll come to an end to the Russian war and the sooner and more reliably we will guarantee that such a cruel war will not spread into other countries,” Zelenskyy said in a virtual address to a high-level forum during the annual meetings of the International Monetary Fund and World Bank in Washington.

The Russian-occupied Zaporizhzhia nuclear power plant suffered a blackout when a missile damaged a distant electrical substation, Ukraine’s state nuclear operator said. The power loss increased the risk of a radiation emergency because the plant needs electricity to prevent its six reactors from overheating.

Energoatom said the external power source was repaired after about eight hours, during which time the plant’s emergency diesel generators provided backup power. It said a similarly hazardous interruption could happen at any time and noted fuel supplies were also unreliable as a result of the war.

“Russia has seized the plant and is not taking any steps to de-escalate,” Energoatom said. “On the contrary, it is shelling important infrastructure daily.”

Zaporizhzhia, Ukraine’s sixth-largest city, is still controlled by Ukraine although Moscow claims to have annexed the surrounding province.

The city has come under nightly Russian attacks since the annexation proclamation, with at least three apartment blocks destroyed while residents slept. The region’s governor, Oleksandr Starukh, said at least 70 people had been killed this month.

The Ukrainian governor of partially occupied Donetsk province said seven people were killed on Wednesday in Russian shelling of a market in the front-line town of Avdiivka.

Ukraine’s military said its forces consolidated control of several settlements recaptured from Russian troops on the west bank of the Dnieper River near the Russian-occupied town of Beryslav in the Kherson region.