Nearly 2,000 children recruited by Yemen’s Houthi rebels have died on the battlefield, the United Nations says, and the group is sourcing key components for weapon systems from companies in the Middle East, Europe and Asia.

In an annual report to the Security Council circulated on Saturday, UN experts said they had found evidence the Houthis used several summer camps and a mosque to disseminate their ideology and recruit children to fight Yemen’s internationally recognised government, which is backed by a Saudi-led coalition.

“The children are instructed to shout the Houthi slogan ‘death to America, death to Israel, curse the Jews, victory to Islam’,” the four-member panel of experts said. “In one camp, children as young as 7 years of age were taught to clean weapons and evade rockets.”

The panel said it received a list of 1,406 children recruited by the Houthis who died on the battlefield in 2020, and 562 child soldiers killed between January and May 2021.

“They were aged between 10 and 17 years old,” the experts said, and “a significant number” were killed in Amran, Dhamar, Hajjah, Hodeidah, Ibb, Saada and Sanaa.

The experts denounced the use of child soldiers in the seven-year conflict and called on all parties “to refrain from using schools, summer camps and mosques to recruit children”. They recommended imposing sanctions on those who do.

The 300-page report also found the rebels, who control the capital Sanaa, continued “to source critical components for their weapon systems from companies in Europe and Asia, using a complex network of intermediaries to obscure the chain of custody”.

“All military and paramilitary forces loyal to the Sanaa-based authorities fall under this definition” of having violated a UN-imposed arms embargo, it said.

Components such as engines and electronics are instead “sourced from abroad using a complex network of intermediaries in Europe, the Middle East and Asia”.

The report did not confirm allegations by the United States and Saudi Arabia that Iran is directly involved in the violations. Tehran admits it supports the Houthis politically but denies it has helped them obtain arms.

The experts said evidence showed weapon components and other military equipment continue to be supplied overland to the Houthi forces “by individuals and entities based in Oman”.

Oman, which shares a border with Yemen, is the only country in the region other than Iran to maintain official links with the armed group. 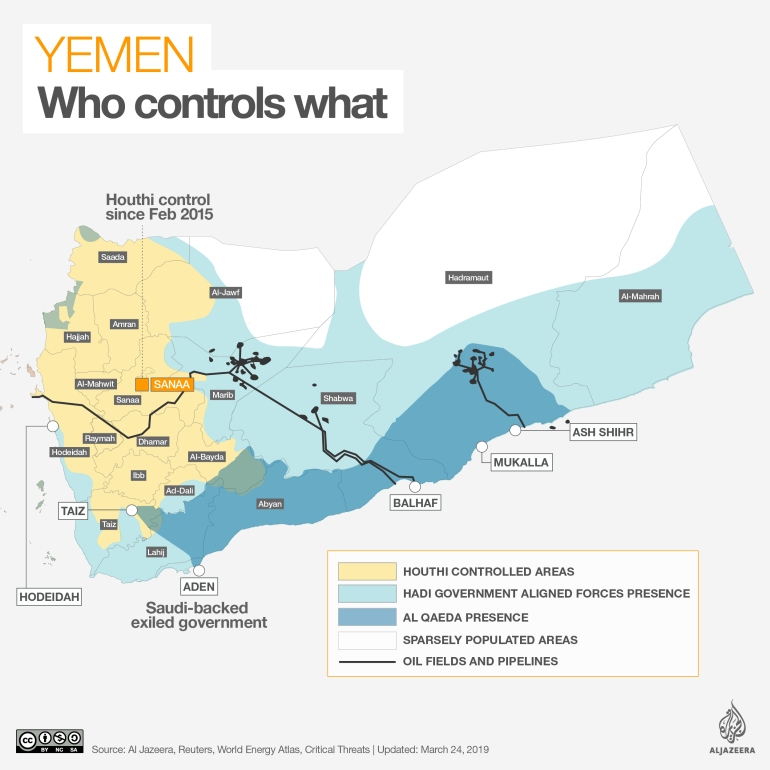 Launched from a ‘mothership’

The report also said waterborne improvised explosive devices had been launched from Houthi-controlled areas with increasing frequency over the past year.

In the Red Sea, improvised explosive devices were used to attack commercial vessels at anchor in Saudi ports, in some cases more than 1,000km (600 miles) from Yemeni shores.

“It appears almost certain that those devices were launched from a ‘mothership’, which would have towed the devices for most of the journey,” the experts said.

The rebels also continued to strike deep inside Saudi Arabia using longer-range drones as well as cruise and ballistic missiles.

“The purpose of these attacks was primarily political… The Houthis want to push Riyadh towards accepting a political settlement beneficial to them,” the UN researchers said.

“This contrasts sharply with the use of missiles and un-crewed aerial vehicles within Yemen, the aim of which is often to attain maximum lethality.”